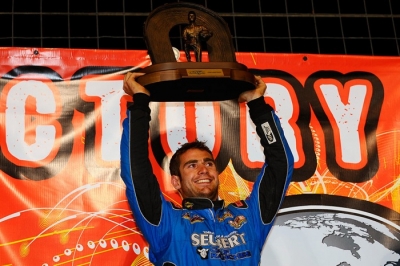 CONCORD, N.C. (Nov. 7) – Jimmy Owens was quiet for nearly the entire World of Outlaws Late Model Series World Finals weekend at the Dirt Track at Lowe’s. But when it counted the most, the Newport, Tenn., driver flexed his muscle, dominating the second half of the series final race of the season for a $10,000 payday. | Slideshow | Complete Lowe's coverage

Owens passed Shannon Babb for the lead on lap 33 in traffic and pulled away from the Moweaqua, Ill., driver until a final restart on lap 40 slowed the field one last time. But Owens pulled away to nearly a straightaway lead as he cruised to the second victory of his career at Lowe’s.

“It’s kind of been a rough weekend for us, but the car was great tonight,” said Owens, who failed to make Thursday’s Topless Showdown feature and Friday's opening World Finals feature. “We were able to get a good run in the heat race, and then we just had a great car in the feature. It got a little tight there a few times trying to get by Babb in lapped traffic, but I knew if I could get out front, I could probably pull away.”

It was a complete turnaround for Owens who was knocked out of a heat race Friday night with a broken rear end.

“My crew worked hard all night to get this thing fixed. They were working at four or five this morning and thankfully it paid off for us tonight.”

While Owens won the race, Josh Richards did just what he needed to do to win the World of Outlaws championship. Richards, of Shinnston, W. Va., started 14th while his closest competitor Steve Francis started from the 10th position. Needing to finish no more than two spots behind Francis, Richards caught and passed him on lap 9, then cruised to a seventh-place finish while Francis faded to the 12th position.

The World of Outlaws title is the first touring series championship of any kind for the 21-year-old driver who grew up working in his father’s Rocket Chassis shop.

“I don’t even know what to say. It’s been an awesome ride,” said Richards. “We’ve gone through so much and to be a champion on this series and it’s just so amazing to me to be here.

“We’ve been in a tight battle all year with Francis and I knew it would come right down to the end. Tonight I was just doing my best to get the points we needed and not get caught up in anything. It worked out and man, it’s just been a great year for us.”