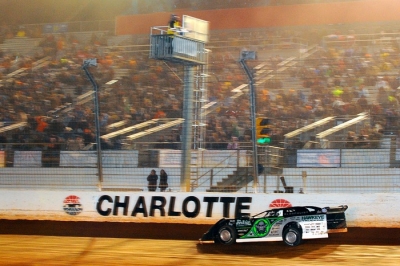 CONCORD, N.C. (Nov. 6) — While contenders fell by the wayside, Scott Bloomquist proved his staying power Friday night. The Hall of Fame driver from Mooresburg, Tenn., survived at the Dirt Track at Lowe's Motor Speedway to win the first night of the World of Outlaws Late Model Series World Finals, his third $10,000 feature victory in the season-ending event in as many years. | Slideshow | Complete Lowe's coverage

Bloomquist jumped out front from his outside-front-row starting position, but relinquished the lead to Earl Pearson Jr. on lap 21 of the 50-lap race. Pearson, of Jacksonville, Fla., looked to be on his way to backing up his $50,000 Colossal victory at Lowe’s earlier this season before mechanical problems knocked him out of the race on lap 28.

Bloomquist went back out front, but he soon had company from Jason Feger of Bloomington, Ill., who worked his way from the 19th starting position to third by the time the caution flew for Pearson. Feger moved by polesitter Shane Clanton of Locust Grove, Ga., to grab second on the restart and then set his sights on Bloomquist.

But Feger, too, dropped from contention when a flat tire ended his chances on lap 40 at the 4/10-mile oval.

Bloomquist led the remaining 10 laps unchallenged to claim the win over Gray Court, S.C., driver Chris Madden. Rick Eckert of York, Pa., finished third to make it a top-three sweep for Bloomquist Race Cars. Darrell Lanigan, of Union, Ky., finished ahead of Josh Richards of Shinnston, W.Va., Richards in fourth while Feger came back from his flat tire to finish sixth.

Bloomquist made sure he was around at the conclusion of the feature event.

“It really is a fine art figuring out if you want to push it and risk tearing something up,” said Bloomquist, the winningest Late Model in track history at Lowe's. “The cushion in one and two was really tricky to mess with, but the car was great and we were able to move all over the track.

“Everything went pretty good for us tonight. Earl got by us there in lapped traffic, but I knew it was too early to worry about it.

“I’m glad that my wife and mother could make it this weekend and (long-time sponsors) Bob and Barb Miller, who I didn’t know were going to make it tonight. It was nice to see them here, and it’s really great to have the people that you love around you when you win races.”

While Bloomquist won the night's biggest purse, attention was also focused on the $100,000 World of Outlaws championship battle raging Steve Francis and Josh Richards. Richards, of Shinnston, W.Va., passed Francis, of Ashland, Ky., for fifth position on lap 28 and looked to be taking control of the point lead until a flat tire sent him to the pits on lap 43.

With a new right-rear tire, Richards restarted from the 12th position and rocketed backed to fifth in the final seven laps while Francis faded to ninth while struggling most of the race without power steering. Francis entered the race with a four-point lead, the same margin Richards will have entering Saturday's season finale.