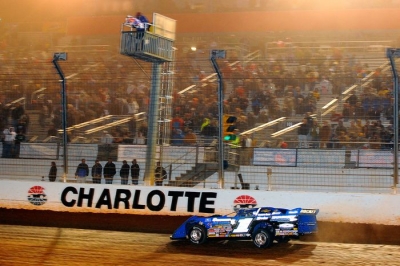 CONCORD, N.C. (Nov. 5) — Josh Richards got off to a spectacular start Thursday on the season-ending weekend with the World of Outlaws Late Model Series. Trailing leader Steve Francis by four points in the championship chase, Richards showed his potency with a victory in the postponed Hungry Man Showdown at the Dirt Track at Lowe’s. | Slideshow | Complete Lowe's coverage

Richards, of Shinnston, W.Va., moved by pole-starting Francis on lap 12 and opened up nearly a half-track lead before a lap-47 caution set up a final three-lap dash. Scott Bloomquist, of Mooresburg, Tenn., passed Francis on the restart and pulled alongside Richards for the lead. After another caution slowed the field one lap later, Richards pulled away on the final restart and cruised to his series-leading eighth World of Outlaws victory of the season. He earned $12,750, including a $2,000 passing bonus after starting second.

“This is a great way for us to start off the weekend. We came into tonight hoping to get in a good run and learn something we can use for Friday and Saturday, and we did both. We had a lot better track tonight than we had last night and by feature time, the car was great. It’s great to get a win tonight and hopefully we can keep this going all weekend.”

Bloomquist settled for second while Francis, of Ashland, Ky., held off Chris Madden of Gray Court, S.C., to finish third. Earl Pearson Jr. of Jacksonville, Fla., rounded out the top five in the event delayed 24 hours because of rough track conditions Wednesday night.

“I had a shot at him there at the end, but that second caution cost us,” Bloomquist said. “Our tires just didn’t come in on that last run like they need to. But we’ll take it. It’s a good start to the weekend.”

While the non-points victory didn't help Richards gain on Francis in the title chase, he moved within one victory of Bloomquist's modern-era record nine-victory season set in 2004.

“Eight wins in a season on this series is huge. There are so many people that have played a huge role in getting us here. Hopefully we can get that ninth win either tomorrow or Saturday and get the championship," Richards said. “It’s definitely going to be tight the rest of the weekend. I think Francis and I are both in the same heat tomorrow night. I’m not sure about Saturday, but I’m sure it’s going to be tight just like it has been all season.”

A third-place finish would normally be considered a good race by Francis, but with the slim point-lead he has on Richards, he knows he’ll have to pick it up if Richards continues to run well.

“We’re not as good as we need to be yet. It’s hard to be disappointed with third, but in a way, I am,” Francis said. “We learned quite a few things tonight that we can use the rest of the weekend. We were good in the first round of qualifying and then went the wrong direction for the second round. We made some changes and tried some stuff for the feature that was better, but still not exactly what we wanted. But I think what we learned in the first round of qualifying will be good for us the rest of the weekend.”

Two rounds of time trials earlier Thursday set the stage for the rest of the weekend. The World Finals continue Friday and Saturday with hot laps scheduled to begin at 5:45 p.m. and racing set to take the green flag at 6:30 p.m. Saturday's World Finals program will be televised live by the Speed cable network from 8-11 p.m. Eastern.