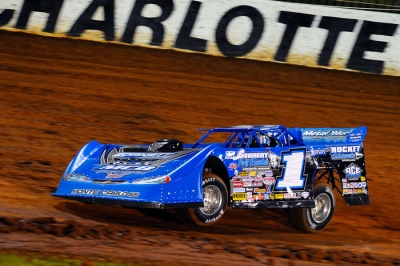 Jeff Cooke of Spartanburg, S.C., and Chub Frank of Bear Lake, Pa., were both struck in the helmet by either dirt clods or rocks during the night’s first heat race. The track was reworked to cut down the inside berm but the problem persisted as Clint Smith of Senoia, Ga., and Tim Fuller of Watertown, N.Y., were also struck during consolation races races and treated by ambulance personnel. Fuller suffered serious facial bruising and Smith was briefly knocked unconscious.

Frank, whose face was discolored and swollen around his right eye, returned to the track after a visit to a nearby hospital, where Cooke was still being treated when the postponement was announced.

“We battled the track conditions all night, and with curfew being an issue we just didn't have enough time to get the surface right," said Seamus Curley, the short-track racing manager at Lowe's Motor Speedway.

Many of the drivers who qualified for the 28-car starting field agreed with the decision to postpone the race, including York Pa., driver Rick Eckert, who was scheduled to start from the 16th position.

“It’s definitely the right call. I mean, when you’ve got guys being sent to the hospital, it’s time to do something. It was just a weird night,” Eckert said. “I’ve never seen anything like this in my life. I’m sure they’ll get this thing reworked and we’ll have a lot better night tomorrow night.”

Frank said that running the topless event — the roofs that typically cover the cockpit were removed — contributed to the rash of injuries.

"I've never been hit this many times on a racetrack with clods that big before," said Frank, who said he fractured bones around his right eye. "It's more than them just not having the track ready, we shouldn't have been out there with no roofs on tonight. There's not much else for me to say. ... I mean, we had four guys in the ambulance tonight."

Chris Ferguson of Mount Holly, N.C., who won a consolation race, was among those glad the track will get 24 hours to prepare the surface before the 50-lapper.

“I think they definitely made the right decision. The track was better after they reworked it. It wasn’t near as rough as it had been, but I guess they couldn’t do anything about the rocks,” said Ferguson. “I got lucky. A rock hit my wind deflector and broke it, but luckily it didn’t hit me."

Not everyone was happy with the decision to postpone the feature. Fifth-heat winner Jonathan Davenport of Blairsville, Ga., was planning to travel to East Alabama Motor Speedway in Phenix City, Ala., to participate in prelims for the National 100 (that feature is Sunday), but will instead return to Lowe's to start eighth Thursday night.

Cooke was perhaps the most seriously injured driver as he was knocked unconscious when the shield of his helmet was pierced in the first heat. Cooke's car hit the wall and came to rest on the backstretch. Safety crews had to cut the halo frame away to remove Cooke from the car.

Officials initially planned to take Cooke to the hospital via a medical helicopter, but after Cooke regained consciousness, he was taken by ambulance. Cooke was awake and alert before the ambulance left for the hospital.

After the incident, track crews used a road grader to cut down the berm around the bottom of the racing surface, a buildup of dirt that was wide with many loose dirt clods. “Guys are getting into and it’s throwing rocks and stuff up onto the track,” WoO points leader Steve Francis said before Cooke's accident. “I think it’s hurting the race surface a bit, and it’s not safe.”

Josh Richards and Steve Francis have been neck-and-neck in the World of Outlaws Late Model Series point standings throughout much of the 2009 season. With just four points separating the series-leading Francis and Richards heading into the final two points races at Nov. 5-7 World Finals, the two drivers looked to use Wednesday's rescheduled Topless Showdown by Hungry Man as a tuneup at the Dirt Track at Lowe's Motor Speedway.

Although the night's feature was postponed until Thursday because of the late hour and rough track conditions, it was clear Richards and Francis were making most of the non-points event.

Richards, of Shinnston, W.Va., and Francis, of Ashland, Ky., topped the rest of the 82-car field in qualifying for the race that pays each driver equal showup points towards the series standings. Richards beat Francis by just .002 to earn the fast qualifier award. Richards then won the first heat race, while Francis matched him by winning the second heat race. Richards wasn't surprised that Francis virtually matched his efforts.

“I kind of figured things might go this way. We’re both racing as hard as we can and we’re both right there again just like we have been all year,” Richards said following his heat race. “That’s what we came down here for. To not only race the rest of the field, but to race Steve Francis. It’s not going to be easy, but hopefully we’ll get ahead of him in tonight’s race and do it again Friday and Saturday night when it counts.”

Francis drew the pole position for the feature event and — who else? — Richards will start alongside in Thursday's race. The second row is made up of Scott Bloomquist and Brady Smith with Chris Madden and Jeep Van Wormer in row three. Jeremy Miller and Jonathan Davenport will line up in the fourth row.

While some special events around the country have struggled to meet expected car counts this season, Lowe's drew a field of 82 cars on Wednesday for the first of four straight nights of WoO action. Series points leader Steve Francis acknowledged that the large car count could come into play the championship battle.

“I’m really surprised at how many cars are here tonight," Francis said. "I’m not sure if they’re all planning on staying and running the whole weekend, but it definitely makes things a little harder as far as the point battle is concerned.

“We’re still going to go out and try to win each night, but with as many good cars as there are here, we’ve got to really concentrate on running well in qualifying and our heat races because if something happens and you have to take a provisional, it’s going to be really tough to come from the back. There’s just too many cars, and good cars, here to do that.”

After competing in the 2007 Prelude to The Dream at Eldora Speedway, two-time and reigning NHRA funny car champion Cruz Pedregon enjoyed Dirt Late Model racing so much that he purchased his own race car to race in the Prelude and other races when his schedule allows.

When he visited zMAX Dragway in Concord, N.C., for the NHRA Carolinas Nationals in September, he took a look next door at Lowe's dirt track and decided he wanted to make laps there.

“I just don’t want to stay out of these cars for very long. If you’re going to be competitive in these cars, you have to get a lot of seat time,” said Pedregon, who has competed in two more Preludes and one Lucas Oil Late Model Dirt Series race since purchasing his own car. “I saw the track when I was here for the NHRA race and noticed the World Finals on the schedule, so I decided to give it a try.

“I really wish I could run more races in this car, and next year we might try to as my schedule allows. I really love Dirt Late Model racing and, to tell you the truth, I would love to be able to do this full time.”

Pedregon admits he’s still adjusting to making left turns instead of driving straight. He qualified 62nd of the 82 cars, but his time was disallowed after his car didn’t meet minimum weight at the scales.

“I didn’t even think about adding weight to compensate for the roof not being on. I think that’s why we were light,” said Pedregon with a laugh. “I’m just out here trying to enjoy myself. I’ve still got a lot to learn, but I’m getting there.”

During opening ceremonies, a moment of silence was observed for Raye Vest, who died Wednesday afternoon at age 76. The long-time car owner of Rick Eckert's racing team died after an extended illness. ... Shane Clanton battled with Chris Madden for the lead in the sixth heat but pulled his smoking car out of action on the eighth lap. ... Former WoO champion Billy Moyer was among drivers who pulled out of the event; he plans on running the Nov. 6-7 Cotton Pickin' 100 at Magnolia Motor Speedway in Columbus, Miss.