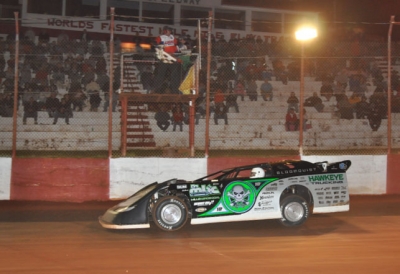 ROME, Ga. (Oct. 11) — Much was made of Scott Bloomquist's inability to win a Lucas Oil Late Model Dirt Series feature while leading the tour points virtually all season. With the title wrapped up Sunday at Rome Speedway, Bloomquist put that worry to rest in grabbing a $10,000 victory in the Rome Showdown. | Slideshow

"It feels great," said Bloomquist, who led all 50 laps to cap his $75,000 championship. "I hope everybody is happy for us. I know our crew and family, everyone is really relieved. I think there's going to be a lot of smiles at the shop this week."

Bloomquist becomes the first driver to win on three of the premier national Dirt Late Model tours over the last 20 years: Lucas Oil, World of Outlaws Late Model Series and Hav-A-Tampa Dirt Racing Series. "It sounds pretty good," Bloomquist said. "This year was extremely hard; the competition, obviously, you can see has stepped up. There's a lot of talented drivers out there."

"It's been a long season," the 45-year-old Bloomquist added in victory lane. "I don't think anybody remembers who won the first race very much. I think they'll remember who won the last one."

Fast qualifier Dale McDowell of Rossville, Ga., and Bloomquist started on the pole in the 40th and final series event with Bloomquist taking command at the outset. He stretched his lead lap after lap and entered lapped traffic after a dozen circuits, allowing Jimmy Owens of Newport, Tenn., and McDowell to draw closer.

A lap-19 caution slowed the action when a fast-moving Ray Cook of Brasstown, N.C., the previous night's winner at Dixie Speedway, fell out of the fourth spot with a broken torque arm.

On the restart, Clanton moved up to second and Bloomquist had a three-length lead at halfway with Clanton, Schlieper, McDowell and Madden in the top five.

Schlieper took second from Clanton on the 34th lap and threatened to put some heat on Bloomquist, but McDowell's lap-43 caution for a flat tire slowed the action. Single-file restarts on lap 43 and again on lap 48 when fifth-running Steve Casebolt had a flat allowed Bloomquist to maintain control the rest of the way.

Notes: Bloomquist drives his own Bloomquist Race Car with a Vic Hill Racing Engine and sponsorship from Miller Bros. Coal, Hawkeye Trucking, Sweet Mfg. and Allstar Performance. ... The race was sponsored by Coal America's Energy. ... Bloomquist held a 190-point lead over Jimmy Owens entering the event and merely had to register to clinch the title. With his victory and the 15th-place finish of Owens, Bloomquist's final margin was 285 points. ... Dan Schlieper posted his second straight runner-up finish. ... Among drivers failing to make the feature: Freddy Smith, David Payne, Travis Pennington, Lamar Haygood, Buster Goss, Aaron Ridley and Jody Summerville. ... Originally the series announced Friday's rained out event at Talladega (Ala.) Short Track would be made up Nov. 14, but that was scratched, leaving Rome as the season-ender.