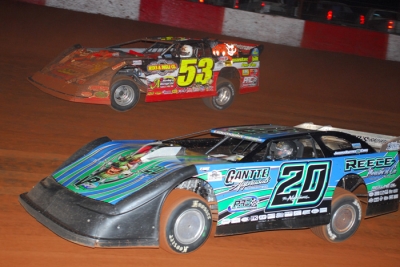 WOODSTOCK, Ga. (Oct. 10) — Capturing his series-leading fifth victory of the season, seventh-starting Ray Cook of Brasstown, N.C., raced to the front on the 23rd lap and led the rest of the 20th annual Dixie Shootout at Dixie Speedway. Cook, who took the lead from home-state driver Clint Smith, earned $10,000 in the 50-lapper sponsored by Coal America's Energy. | Slideshow

"I have to thank the Good Lord for a good and safe race," Cook said. "(Track owner) Mickey Swims did a whale of a job getting this track ready tonight with all the rain they have had here the last two weeks.

"This was Mike Swims' brainchild and I remember getting an invitation to this race and thought that was pretty neat, and he and I became good friends over the years and we all still miss him. I know he was riding along with me tonight and I'm sure he would be proud to have put on a race like we all saw tonight."

Dan Schlieper of Sullivan, Wis., was second followed by Earl Pearson Jr. of Jacksonville, Fla., who lowered the track record in time trials with a 13.824-second lap at the 3/8-mile D-shaped track. Smith, of Senoia, Ga., was fourth followed by polesitter Jimmy Owens of Newport, Tenn.

Owens and Smith started on the front row with Smith taking command and Cook quickly moving into the top five. Moving up to the high groove, Cook took third from Schlieper on the 14th lap, then battled past Owens to grab second two laps later.

A lap-20 caution for Skip Arp bunched the field and Cook went around Smith three laps later and began stretching his lead as he entered slower traffic. A lap-37 caution for Randy Weaver gave Cook clear racetrack, and another yellow appeared two laps later when Don O'Neal had a flat tire.

Cook edged away on the restart and held on amid traffic in the final laps for the victory.

"With this group of cars, you've just gotta hit everything perfect, and it's hard to do," Cook said. "But just thank the Lord, we did tonight."

After Cook went by, Schlieper figured he was racing for second place. His hopes of overtaking Cook were slim. "The only way it would ever happen was if he would've gotten stuck in lapped traffic," Schlieper said. "He had a dominant car tonight.