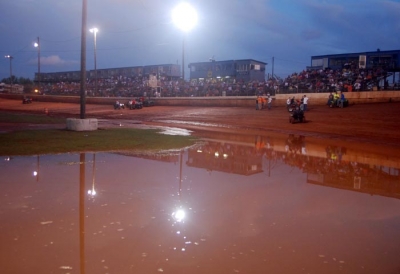 Water pooled in the infield at Columbus, Miss. (DirtonDirt.com)

Rain and wet conditions on Saturday have postponed the two biggest Dirt Late Model events in the country to Sunday afternoon.

In Brownstown, Ind., the 30th annual Jackson 100 at Brownstown Speedway was rained out following the first heat. The $12,000-to-win Lucas Oil Late Model Dirt Series event, already reduced to a one-day event because of rain on Friday, is set to resume the program with the second heat at 3 p.m. Sunday at the quarter-mile oval.

In Columbus, Miss., the 20th annual Magnolia State 100 has been rescheduled for 2 p.m. Sunday after lingering problems from a Saturday morning storm that dumped more than two inches of rain on the third-mile oval. Several streams of water seeped under the frontstretch wall and extensive attempts to stem the tide failed, forcing the postponement.

"We really thought the weather was going our way after losing yesterday, but it just wasn't meant to be," said track promoter Tim Keithley. "Luckily the forecast for (Sunday) is great, it is supposed to be around 75 degrees and beautiful, and we are going to put on a great show for the fans here at Brownstown."

Rain began to fall during the waning laps of the first heat on Saturday, a prelim completed with Wayne Chinn outrunning fast qualifier Shannon Babb, Brad Neat and Freddy Smith. The program will pick up at that point Sunday afternoon at the Jackson County Fairgrounds. The remainder of the heat races, consolation races and the 100-lap main event will complete the day's racing along with local division racing.

Saturday's qualifying was married by the violent, flipping accident of Jason Jameson of Lawrenceburg, Ind. He was checked out by medical personnel and was OK. | Slideshow of Jameson's accident

Heavy morning rains soaked Columbus Speedway on Saturday, but race promoter Dewitt Singleton and track promoter Johnny Stokes forged ahead with plans to race at a track that developed a temporary pond between turns one and two. | Magnolia State 100 prelims

The track surface was sealed and in good shape early in the evening, but water seeping under the frontstretch wall hampered efforts to get the track completely race-ready. Stokes and other track workers pour bags of concrete onto areas near the wall, and several cars tried to help dry the frontstretch.

But by 8 p.m. it was clear the frontstretch seepage wasn't going to stop soon enough to race on Saturday night. "I've seen one or two streaks, but I've never seen it this bad all over," said veteran hometown driver Eddie Rickman.

Stokes said he counted 20 spots along the wall where water was running underneath, but he was convinced the track would be in shape for Sunday's racing. Consolation races are scheduled to start at 2 p.m., and the track will take a late-afternoon break for nearby church services to rework the track before beginning feature events at 7 p.m., starting with the Super Late Model 100-lapper.

Fans who can return Sunday will be admitted with rainchecks, while fans who aren't able to return were offered tickets to the 2011 Magnolia State 100 by Singleton.