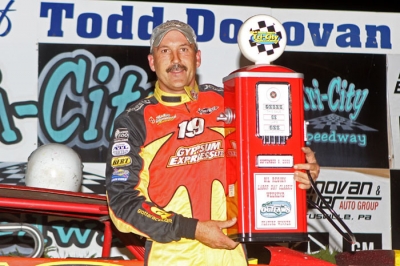 It was the seventh triumph in the last 11 WoO events for the sizzling 41-year-old standout from Watertown, N.Y., who moved into a tie with Josh Richards of Shinnston, W.Va., for winningest-driver status on the 2009 tour. Both drivers have won seven times.

“I thought (the run of success) was ending last night after I made a bad decision,” said Fuller, who led laps 1-13 of the weekend’s opening feature before an overheated right-rear tire sent him tumbling to a sixth-place finish. “But tonight we put on the same tires as everybody else did and we got right back on track. I hope it doesn’t end. I like it the way it is.”

Fuller steered his Gypsum Express Rocket car forward from the seventh starting spot, passing Steve Francis of Ashland, Ky., for the lead on lap 28 and never looking back. Defending WoO champion Darrell Lanigan of Union, Ky., who started alongside Fuller in eighth, overtook Francis for second on lap 37 and made a late bid to unseat Fuller but settled for second place in his one-week-old Rocket mount.

Francis, who raced off the pole position to lead laps 1-27 in the Beitler Motorsports Rocket, held on to finish third. He fell short of sweeping the weekend after capturing his sixth victory of 2009 the previous evening, but the run allowed him to regain the WoO points lead by four points over Richards, who finished a quiet ninth.

Jason Covert of York Haven, Pa., advanced from the ninth starting spot to place fourth in Barry Klinedinst’s Rocket car. It was his second top-five run of the Oil Region Labor Day Classic and once again earned him a $500 bonus as the highest-finishing driver who hasn’t won a WoO event and isn’t ranked among the top 12 in the tour points standings.

Shane Clanton of Locust Grove, Ga., completed the top five in the RSD Enterprises Rocket after starting third. He joined Francis, Lanigan and Covert as drivers with a top-five finish in both halves of the Classic.

Fuller’s latest checkered flag was arguably his most satisfying of the season.

“You can win from the front row and feel good,” said Fuller, who registered his 10th career victory on the WoO. “But when you do it like we did tonight — when you start further back and pass everybody you need to pass — it’s a way better feeling.”

Fuller had to withstand a stiff challenge from Lanigan, who sailed his car hard to the outside of Fuller rounding turns three and four on lap 44. Lanigan wasn’t able to get around Fuller, however, and that proved pivotal in the outcome of the race, which was slowed by just a single caution flag, on lap 34 when Matt Lux of Franklin, Pa., stopped in turn four with mechanical trouble.

When the low-running Fuller saw Lanigan’s car above him, he immediately adjusted his groove higher on the track and proceeded to pull away over the remaining circuits.

“I showed him my nose too quick,” said Lanigan, who finished 0.995 of a second behind Fuller. “He saw me out there and knew to move up. He’s running smart right now.”

Lanigan, 39, nearly surprised Fuller, who thought the inside was the lane of choice.

“It seemed like I was so slow going in there down on the bottom,” said Fuller, who earned $10,600 to push his total WoO earnings to over $130,000 this season. “I was thinking, I can’t believe no one is running over me. But Smoke (Fuller’s chief mechanic Mike Countryman) was telling me (with hand signals from the infield) to stay on the bottom, so that’s what I did.

“Then Lanigan showed me the nose. I saw him out there out of the corner of my eye and fortunately he didn’t make it sick. I knew right then that I had to get back up in the middle of the corner where I could keep my momentum up.”

Francis, 41, could only watch Fuller and Lanigan battle it out for the win during the race’s late stages.

“I was a little softer on the right front (tire) than Fuller and Darrell,” said Francis. “As the race went on I just couldn’t turn through the corners like they could anymore. I had to start bending it into the corners and was just losing time to them.”

Tim McCreadie of Watertown, N.Y., was sixth — and pushing Clanton for fifth — at the finish after starting 18th for the second consecutive night. Clint Smith of Senoia, Ga., placed seventh, followed by fourth-starter Jeremy Miller of Gettysburg, Pa., who ran second for laps 4-16; Richards, who started fifth; and rookie Russ King of Bristolville, Ohio, who recorded his fourth top-10 finish in the last five events.