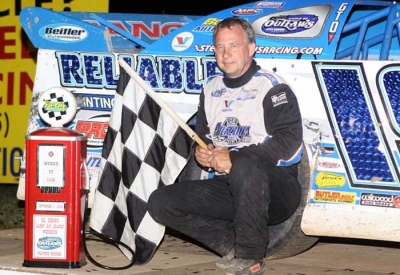 Francis, 41, entered the weekend action at the half-mile oval with seven runner-up finishes in the last 12 tour race — and without a victory since scoring his fifth win of the season on May 31 at Tyler County Speedway in Middlebourne, W.Va.

“It’s definitely a relief to finally win again,” said Francis, who started third in Dale Beitler’s Reliable Painting Rocket car. “When we’re finishing second, we’re making a living and maintaining in the points, but it’s still not a win. Anytime you win it feels good. That’s we come to do, and it had been awhile since we did it last.”

Francis earned $10,700 for his sixth triumph of the season on the series. It was his 26th career series win – the most of any driver on the tour since 2004 – and gave him a victory in the first half of Tri-City’s Oil Region Labor Day Classic for the third consecutive year.

The 2007 WoO champion’s joy came at the expense of Richards, who appeared headed to his series-leading eighth win of the season after passing Tim Fuller of Watertown, N.Y., for the lead on lap 14. Richards turned back repeated challenges from Francis during a race that was slowed by only a single caution flag on lap 31, but he made a fatal slip on the 48th circuit that sent Francis to Victory Lane.

Richards, 21, settled for second place in his father Mark’s Seubert Calf Ranches Rocket after starting from the pole position, keeping him winless on the WoO since he overtook Francis to win on July 16 at Dakota State Fair Speedway in Huron, S.D. He also saw his points lead over Francis shrink even smaller — to a mere eight points with six events remaining.

Darrell Lanigan of Union, Ky., who trails Richards and Francis in the points standings, followed the series leaders across the finish line in third place. He advanced from the eighth starting spot to third by lap 17 in his 1-week-old Rocket car, but he couldn’t climb higher.

Fuller, who had won six of the last nine WoO events including Wednesday at Brewerton (N.Y.) Speedway, faded to a sixth-place finish after outgunning Richards from the outside pole to lead laps 1-13. His soft-compound right-rear tire overheated, dooming his chances.

Francis felt fortunate to bring his 20-race WoO winless streak to an end.

“We were pretty equal,” said Francis, who reached second with a lap-16 pass of Fuller. “I felt like I could gain on Josh in (turns) one and two, but he could gain in three and four. I don’t think I’m passing him if he doesn’t slip up.

“When he ran in there (in turn three with two laps remaining) he just sort of misjudged where the rubber was and where his car needed to be. He slipped off the bottom and I was lucky enough to be there.”

Richards sat sullenly on the back step of his trailer after the race, replaying lap 48 over and over in his mind.

“I just slipped up,” said Richards. “I have to admit it. I gave the race away. There was only one groove to be (at the end) and I got out of it.

“We caught Boom (Briggs) with two (laps) togo and I tried to slow the pace down. He entered way, way low going into three. I entered just a little bit wider, I got my right-rear tire out of the rubber, and I just slipped. I left the door open for Steve.

It was my fault,” he continued. “It’s just disappointing. The team’s worked so hard for this and we were in position to win, and I screwed up. It’s still good to run second, but we’re trying to beat Steve (in the points race) and Steve won.”

Clint Smith of Senoia, Ga., brought out the race’s lone caution flag on lap 31 when he slowed in turn four. He continued and finished on the lead lap in 17th place.

Austin Hubbard, 17, of Seaford, Del., registered the second WoO fast-time honor of his young career with a lap of 18.328 seconds. But he failed to qualify for the feature after fading out of a transfer spot in his heat and running into trouble during the first consolation race.