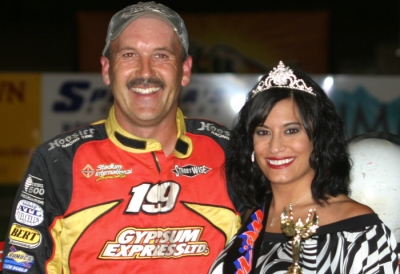 It continued his torrid summer on the national tour. It came at a third-mile oval that he used to call home during his days as a DIRTcar big-block Modified regular. His car owner, John Wight, was looking on from the tower of the track he purchased earlier this year. And Fuller, 41, of Watertown, N.Y., happened to earn his $10,600 victory in truly dramatic fashion.

Battling forward from the eighth starting spot in the Gypsum Express Rocket, Fuller took advantage of a late caution flag to grab the lead from Vic Coffey of Caledonia, N.Y., on lap 45 and hold on for his sixth triumph in the last nine WoO events.

“It’s just incredible to win one at my car owner’s track in front of a crowd like this,” said Fuller, gesturing toward the bleachers that were filled to capacity for Brewerton’s first-ever WoO program. “For a while it seemed like I could only win (Dirt Late Model) races in the West, so it’s a nice change to win close to home.”

In a showdown of former DIRTcar big-block modified regulars who have won the last two WoO Rookie of the Year awards, Fuller beat Coffey’s Sweeteners Plus Rocket car to the finish line by a scant 0.833 of a second to record his ninth career win on the tour — and deny Coffey a coveted first career series victory.

Polesitter Rick Eckert of York, Pa., finished third in his Raye Vest Racing Team entry, just a few lengths behind Coffey at the finish. Brady Smith of Solon Springs, Wis., advanced from the 14th starting spot to finish fourth — his first top-five since July 24 at Attica (Ohio) Raceway Park — and 21st-starter Chub Frank of Bear Lake, Pa., made a late charge to snare a fifth-place finish in his Rocket.

Former WoO champion Tim McCreadie of Watertown, N.Y., who competed in Brewerton’s big-block modified ranks before going full-fender racing, finished sixth after being overtaken by Frank in the final laps.

Coffey, 38, appeared headed to a milestone victory after racing forward from the seventh starting spot to take the lead on lap 13 from Shane Clanton of Locust Grove, Ga. He pulled away when green-flag conditions prevailed for an extended period — as evidenced after Fuller came on following a lap-31 caution flag to lead lap 36 but then dropped back, losing the top spot to Coffey on lap 37 and falling nearly a straightaway behind by lap 44.

Moments later, however, a busted driveshaft from the car driven by 17-year-old Austin Hubbard of Seaford, Del., was spotted on the inside of the homestretch, bringing out the race’s fourth and final caution flag. The turn of events gave Fuller new life and proved to be Coffey’s undoing.

Fuller fired off quickly on the restart, pulling to the outside of Coffey and taking the lead on lap 45. One lap later Fuller surged ahead of Coffey to snatch the inside line that Coffey had been using so successfully throughout the race.

“Under a long green (flag) he was supersonic — I couldn’t run with him,” Fuller said of Coffey. “As his tires got hot he got better, and as mine got hot I got slower.

“It all played out in my favor when that caution came out with six (laps) to go. I got one more shot at him and I felt my chances were pretty good. My tires were so good cold.

“I wasn’t positive I could pull it off (a pass) after the caution because I didn’t make it work 15 laps prior to that,” added Fuller, who owns 26 career DIRTcar big-block Modified feature wins at Brewerton. “But my car stuck in that center (lane) and I was able to clear him and get to the bottom. Then I was just hoping I could last to the end.”

The caution flag came out at the worst possible time for Coffey, who couldn’t match Fuller’s speed over a short sprint.

“I definitely didn’t want to see that caution because I knew (Fuller) was good for three, four, five laps, maybe a tick better than me,” said Coffey. “He got alongside me the restart before that and I was able to fight him off, but I knew when the caution came out with six to go that if he could stick (the center lane) twice and drop down in front of me, there’s nothing I would be able to do about it. And that’s what he did.

“Obviously he’s on a roll right now, there’s no doubt about it. He’s getting the breaks he needs and taking advantage of them.”

While Coffey scored a career-best WoO finish and earned $500 as the highest-finishing driver who hasn’t won a WoO event and isn’t ranked among the top 12 in the points standings, he was disappointed to remain winless at Brewerton during his career. He had previously absorbed heartbreaking late-race losses on at least three occasions at the track.

Josh Richards of Shinnston, W.Va., maintained his WoO points lead despite being forced to restart at the rear of the field following an incident on the race’s original start. The 21-year-old sensation started fifth but he got sideways between turns one and two and was nicked by Coffey, cutting Richards’s left-rear tire.

With a caution flag thrown for the multi-car, chain-reaction stack-up that occurred behind Richards, the young driver was able to pit for a tire change. He rallied to finish eighth – just one spot behind his closest pursuer in the points standings, Steve Francis of Ashland, Ky., who ran quietly just outside the top five throughout the A-Main and left Brewerton trailing Richards by 12 points.

Billy Decker of Unadilla, N.Y., a Brewerton big-block modified regular and another member of Wight’s Gypsum Express team, finished ninth, while Clanton faded to a 10th-place finish (after starting second and leadings laps 1-12) thanks to a broken right-front fender flare that hampered his car’s handling.

The WoO closes out a busy week with the Armstrong Cable Oil Region Labor Day Classic Saturday and Sunday at Tri-City Speedway in Franklin, Pa. Complete shows both evenings will be topped by 50-lap, $10,000-to-win features.