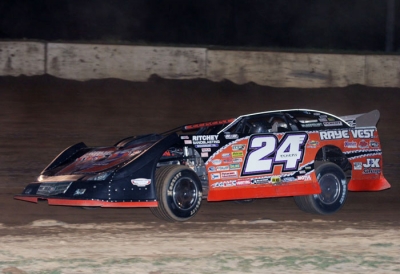 Eckert, 43, of York, Pa., dominated the 50-lapper at Bob and Kathy Rohrer’s track, blasting off the outside pole to lead the entire distance for his third victory of the season on the national tour. | Slideshow | Video

“This makes coming here three times worth it,” Eckert said after pocketing $10,600 for capturing a race that was postponed by rain on July 26 (near the end of time trials) and Aug. 23 (after heat races). “This is great for (car owner) Raye (Vest), great for the team and great for me. It’s been awhile since we won one of these races.”

Indeed, Eckert’s last WoO triumph came June 22 at Can-Am Motorsports Park in Lafargeville, N.Y. What’s more, with his earlier 2009 victories worth $7,000 apiece, he collected a five-figure first-place prize for the first time in over 14 months.

Eckert’s only threat at Eriez came from Steve Francis of Ashland, Ky., who made a bid for the lead as Eckert worked lapped traffic with his Team Zero by Bloomquist car midway through the race. But Eckert pulled away once he got into open track, leaving the fourth-starting Francis to settle for his seventh runner-up finish in the last 11 WoO LMS events behind the wheel of the Beitler Motorsports Rocket.

Tim Fuller of Watertown, N.Y., started and finished third in the Gypsum Express Rocket, but he had to battle hard to outduel Josh Richards of Shinnston, W.Va., for the show position. Richards, who started from the pole position, finished fourth in the Seubert Calf Ranches Rocket to maintain his points lead by 14 markers over Francis, and Eriez regular Chad Valone of Warren, Pa., scored a career-best WoO LMS finish of fifth in a Rocket machine.

Eckert’s winning move proved to be his opening-lap slide by Richards to assume command. He went on to record his 19th career WoO LMS victory, which ironically tied him with Richards for second on the tour’s win list since 2004.

“I knew the start was gonna be pretty close,” said Eckert, who sits fifth in the series points standings. “(Richards) was in the traction down on the bottom, but when we were out there riding around (on the pace laps) I saw that there was some moisture at the top so I just stayed wide and kept my right-side tires in it.

“We fired at the same time, but I probably had a little better lane through (turns) one and two. I could run down in there and carry some speed — and usually with these cars, if you can be beside a guy on corner entry on a start, you’re gonna beat him off of two.”

After three caution flags and one red flag (for a homestretch rollover on lap five that left Scott Gurdak of Spring Creek, Pa., shaken but otherwise uninjured) during the race’s first five circuits, Eckert controlled the remaining 45 laps that ran caution-free.

“One time in (lapped) traffic I got behind guys who were side-by-side and I seen Steve (Francis) get under me, so I was like, ‘I gotta get going here,’” said Eckert. “I couldn’t find my crew guys through the fence, so I just ran as hard as I could because I thought they were right on me. I had no idea I was pulling away.”

Francis, 41, could only mutter “second again” after falling just short of his sixth victory of ’09. The 2008 WoO LMS winner at Eriez crossed the finish line 4.066 seconds behind Eckert.

“I thought I was gonna get him,” said Francis, who showed his car’s nose to Eckert on lap 24. “Then, all of a sudden, my car just died. I don’t know if I overheated the tires or what, but all I could do (the second half of the race) was drive around and try not to make any dumb mistakes.”

Fuller, 41, was rapidly closing on Francis during the race’s final laps but ran out of time. He fell back to fifth early in the race and spent nearly 30 laps attempting to power around the outside of Richards for third before finally completing the pass on lap 38.

“I needed to get by Josh 20 laps earlier to have a shot at Francis,” said Francis, who had won five of the last seven WoO LMS events. “It was just hard to make a clean pass — and (Richards is) in a points battle, so I didn’t want to rough him up or do something that might take him out.”

The 21-year-old Richards did all he could to hold off Fuller but conceded that he had a fourth-place car.

“We were off a little bit,” said Richards, who won the 2007 WoO event at Eriez. “The car was a little bit too tight. I couldn’t drive it in as aggressively as I wanted to.”

Valone, 37, started sixth and hung tough for a milestone top-five finish. He earned the $500 as the highest-finishing driver who hasn’t won a WoO event and wasn’t ranked among the top 12 in the tour points standings.

Chub Frank of Bear Lake, Pa., who has turned his season around over the past two weeks since borrowing a 2005 Rocket car from Valone, finished a fast-closing sixth. Clint Smith of Senoia, Ga., advanced from 14th to seventh, ahead of Franklinville, N.Y.’s Greg Oakes, who scored a career-best WoO LMS finish of eighth; defending WoO LMS champion Darrell Lanigan of Union, Ky., who stared 23rd after using a provisional; and Rookie of the Year points leader Russell King of Bristolville, Ohio.

Time trails and heat races were completed Aug. 23, so two consolation races kicked off Tuesday night’s program. Clanton and Austin Hubbard of Seaford, Del., were victorious in the last-chance events.