Fuller back on WoO track at Screven with fifth win 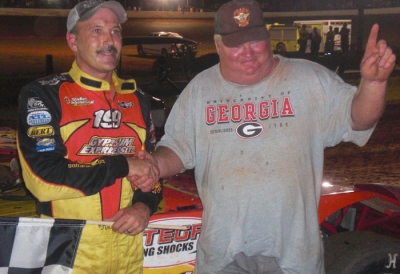 SYLVANIA, Ga. (Aug. 29) — It didn’t take Tim Fuller long to get back to his winning ways on the World of Outlaws Late Model Series. Just two starts after seeing his record-tying four-race win streak come to an end, Fuller roared back into the spotlight with a victory in Saturday night’s Dorsey Commercial Tire 50 at Screven Motor Speedway. | Slideshow

“It feels good to get right back on track,” said Fuller, who rebounded from a 23rd-place finish due to a broken engine in the ‘Buckeye 100’ on Aug. 22 at K-C Raceway in Alma, Ohio. “Hopefully we can get on another roll.”

Steve Francis of Ashland, Ky., placed fourth in the Beitler Motorsports Rocket after surviving a 360-degree spin in a lap-32 incident that also involved defending WoO champion Darrell Lanigan of Union, Ky., who was forced to restart at the rear of the field because he spun his car to a stop. Rick Eckert of York, Pa., completed the top five in the Raye Vest Racing Team Zero by Bloomquist car after starting 14th.

Fuller started from the pole position — the third time he’s drawn the No. 1 spot during his hot streak — and had plenty of racing luck on his side. Not only did he watch Cole develop a flat tire on his Starrette Trucking mount after leading laps 1-6, but he also caught a caution flag at just the right time when Richards was making a serious bid for the lead.

Richards, who started fifth, pulled inside of Fuller and came within inches of leading lap 34. The young sensation was still side-by-side with Fuller when the race’s fourth and final caution flag flew on lap 34 for the spinning car driven by series rookie Brent Robinson of Smithfield, Va.

“If that caution doesn’t come out I was probably gonna be screwed,” said Fuller, who pocketed $10,600 to push his 2009 WoO earnings over the $100,000 mark. “I was running that top, so I had no idea the bottom was taking rubber like it was. When Josh got under us he showed me that rubber was where I needed to be — and fortunately a caution came out before he got ahead of me.

“I might’ve been able to pinch him down (entering turn one) and get into that rubber to stay in front of him, but I’m not sure. I think it was more likely that I would’ve had to fall in behind him and then there would’ve been no way for me to pass him back.

“That’s just the way things are going for us,” concluded Fuller, who registered his eighth career WoO triumph. “We’re getting the breaks.”

Richards was disappointed that the untimely caution cost him his best opportunity to execute a winning pass, but he was still satisfied with a run that pushed his points lead to 18 markers over Francis.

“I found that rubber on the bottom before (Fuller) did,” said Richards. “I used it to get up beside him on the homestretch and I thought we might have him, but once that caution came out I knew he’d get back down in front of us because I showed him where the rubber was.

“But I’m happy to get out of here with a second and the car in one piece. There’s still a long way to go (to secure the $100,000 WoO championship), but we took another step tonight.”

The 47-year-old Frank battled at the front of the pack with Fuller and Richards early in the distance but couldn’t maintain that pace.

“We didn’t have it quite right,” said Frank, who recorded his sixth top-five finish of the season. “We probably could’ve tightened up a little bit more.”

Francis, meanwhile, pulled off the save of the night when he spun completely around in turn two on the 32nd lap and continued. His twirl came after he got sideways in front of Lanigan, causing Lanigan to spin out of fourth place as he took evasive action.

“I just misjudged where Chub was going and started spinning — it was either hit Chub or spin,” Francis said of the incident. “I just hate that Lanigan got the worst of it. I was able to keep my wheels turning as I spun and drove away, but I guess Darrell spun to a stop.”

Lanigan was on the move before the bad break, advancing from the 12th starting spot to battle Francis for fourth. He finished 14th, dropping him 82 points behind Richards in the points standings.

Notes: Fuller's Rocket Chassis is sponsored by Gypsum Express, Big Red Towing and Integra Shocks. ... The race followed Friday's rainout at Fayetteville (N.C.) Motor Speedway. ... Eighteen of 25 starters finished on the lead lap. ... Seventh-place finisher Austin Hubbard, 17, of Seaford, Del., earned the $500 Bonus Bucks cash for being the highest-finishing driver who hasn’t won a WoO event and wasn’t ranked among the top 12 in the points standings. ... Among the early retirees was WoO regular Brady Smith of Solon Springs, Wis., who was running eighth when he exited on lap 26 with rear end problems. ... Jonathan Davenport, Henry Carter and Scott Shirey were penalized to the rear of the field for the start after reporting late to the staging area. ...The consolation races were captured by defending Screven champion Chesley Dixon of Swainsboro, Ga., and 14-year-old Tyler Reddick of Corning, Calif. In the main event, both slowed on the track bring out caution flags — Dixon on lap six, Reddick on lap 28. ... It appeared that the unheralded John Henderson of Aiken, S.C., had upset the Outlaws in Ohlins Shocks Time Trials to register his first-ever fast-time honor after stopping the clock at 14.398 seconds. But a post-qualifying inspection found that he had used an illegally-treated tire, forcing WoO officials to disqualify him for the remainder of the night and suspend him from further tour competition for a period of 30 days. ... The WoO now heads back north for a big week of action in the Northeast, beginning on Tuesday with the completion of the twice-postponed 50-lap event at Eriez Speedway in Hammett, Pa. The tour then visits Brewerton (N.Y.) Speedway on Wednesday before wrapping up the swing on Saturday and Sunday, Sept. 5-6, with the Oil Region Labor Day Classic at Tri-City Speedway in Franklin, Pa.