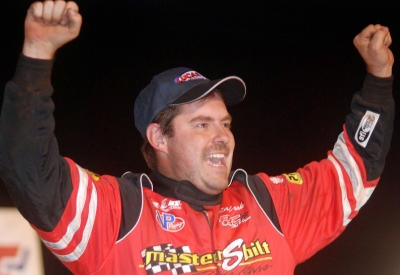 Ray Cook gets his first victory in Kentucky. (DirtonDirt.com)

BARDSTOWN, Ky. (Aug. 29) — Ray Cook of Brasstown, N.C., led all 60 laps of the Bluegrass Classic for his third Lucas Oil Late Model Dirt Series victory of the season. Cook earned $10,000 for not only his first victory at Bluegrass Speedway, but his first victory in Kentucky. | Slideshow

Cook started outside the front row, got the jump on polesitter Chris Wall of Holden, La., and ran virtually unchallenged in a race where racers filtered into single-file formation over the last two-thirds of the race.

Wall closed within a few lengths of Cook with 15 laps remaining, but Cook added a lapped-car cushion a few laps later and eased his No. 53 to victory at the half-mile oval.

Wall settled for second while fifth-starting Dale McDowell of Rossville, Ga., was third. Brandon Kinzer of Allen, Ky., and Billy Moyer of Batesville, Ark., rounded out the top five. Series points leader Scott Bloomquist of Mooresburg, Tenn., a three-time Bluegrass Classic winner scheduled to start ninth, had to start in the rear after fuel pump problems forced him to pit during the parade laps. He finished 17th.