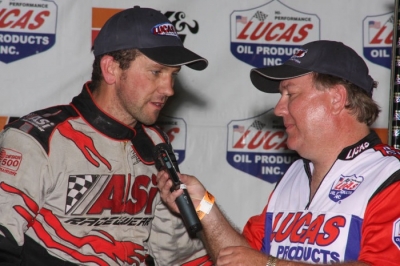 The low-running Birkhofer edged the high-running Van Wormer at the white flag, and Van Wormer jumped the turn-two cushion trying to regain the lead, allowing Birkhofer to sneak away with a $10,000 payday at the dazzling facility that has seen more than $4 million in renovations in recent years.

"I am not really use to running up the cushion as much as Jeep and Matt were," said the eighth-starting Birkhofer, who won three Lucas Oil events in a 16-day stretch in May. "Our car ran better on the bottom. There was enough moisture down there and we got good traction and I didn't think we could catch Jeep, but with two to go I was able to pull even with him."

At the outset of the 31-minute feature, Miller and Van Wormer started on the front row with Van Wormer taking command before a lap-one caution for Steve Casebolt's early departure. Van Wormer, Miller and hometown driver Scott James pulled away on the restart, but the seventh-starting Carrier got moving in the low groove, taking the third spot from James and then tracking down Van Wormer and Miller.

A lap-19 yellow bunched the field when Jimmy Owens and Terry Casey came to a halt in turn four, and Van Wormer got rolling again with Miller hot in his tire tracks. James fell by the wayside with a vibration on the 36th lap amid three cautions from laps 34-36 (the first for Eric Jacobsen, the last for Ray Cook's broken driveshaft).

With the final 14 laps running caution free, Birkhofer took second from Miller with an inside move on the 41st lap and began reeling in Van Wormer.

Birkhofer pulled alongside Van Wormer on the 48th lap, edging ahead at the white flag as the frontrunners ran door-to-door down the frontstretch. The last-lap showdown was over when Van Wormer slipped in turn two and Birkhofer capitalized for the victory.