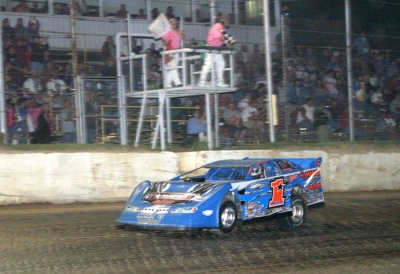 Frank, 47, captured his second consecutive WoO race — just two days after snapping a frustrating 15-month-long, 62-race winless streak on the national tour with a triumph at Muskingum County Speedway in Zanesville, Ohio. His $20,600 payoff also marked the first time he earned a five-figure race check since October 2007 when he pocketed $50,000 for winning the Dirt Track World Championship at the 3/8-mile K-C oval.

“It’s funny how fast things can turn around,” said Frank, who registered his 16th career WoO victory. “But I’m glad they did. We needed this bad. Now I’ll be able to pay some bills and make some people happy.”

A 2005-vintage Rocket car borrowed from western Pennsylvania driver Chad Valone has vaulted Frank back into the limelight, dramatically turning around his moribund campaign.

“Last week (a dismal three-race Mid-Atlantic swing) wasn’t good and that’s why we had to do something different,” Frank said of his decision to put together an older-style chassis that had been sitting in Valone’s shop. “It’s great that we’ve made it work. I just feel so comfortable in this car.”

Yes, Frank is fast again and getting some critical breaks, which was clear in Saturday night’s 100-lapper.

Frank drew the outside-pole starting spot and led the race’s first 41 laps before being overtaken by Brian Birkhofer of Muscatine, Iowa. But on lap 55 Birkhofer slowed in turn one with a flat right-rear tire and was clipped slightly by Doug Drown of Wooster, Ohio, ending his bid and putting Frank back in front for good.

Josh Richards of Shinnston, W.Va., chased Frank for the remainder of the distance, but the 21-year-old never mounted a serious challenge and settled for second place in his Seubert Calf Ranches Rocket. The runner-up finish moved Richards back into the WoO points lead by 14 points over Steve Francis of Ashland, Ky., who finished 12th after using a provisional spot to start 23rd in the A-Main.

Bart Hartman of Zanesville, Ohio, marched forward from the 16th starting spot to finish third in his Rocket car. Tim McCreadie of Watertown, N.Y., advanced from the ninth starting spot to place fourth in the Sweeteners Plus Rocket and polesitter Shane Clanton of Locust Grove, Ga., hung on to complete the top five in the RSD Enterprises Rocket.

“I think Birkhofer probably had the best car,” admitted Frank. “He found the bottom (groove) a little quicker than I did and he was driving off a little bit until he got that flat.

“I don’t think I could’ve got back by him, but I was happy that we could run with him. Last year he lapped us here (in the DTWC) and just drove off big-time, so I would’ve felt good about finishing second to him.”

Frank ended up holding the trophy in victory lane, however, after surviving at least one tense moment while trying to negotiate lapped traffic late in the race.

“The track took a little bit of rubber,” said Frank. “I got out of that rubber and tried to go on the outside of Francis (to lap the 2007 WoO champion on lap 83) and about spun out (in turn four). That scared me until I looked (to the left) and nobody was there, so I was able to get back down in the rubber.”

Richards, who started eighth, saw Frank’s bobble but couldn’t take advantage of it.

“He slipped up out of the rubber in (turns) three and four when he was behind Francis,” said Richards, whose march to the front reached third on lap 37 and second when Birkhofer dropped out. “That was the chance I was hoping for, but I just wasn’t close enough to get under him.

“I felt like we had a great car, but once Darrell (Lanigan) leaked oil on the track (from a hole in his car’s oil line) it was just instant rubber (condition) out there. I could tell there was rubber down when I was warming up my tires under caution (on lap 55), and the rest of the race you just had to stay in that line.”

Richards once again fell short of his coveted first big-money, 100-lap victory. It was the second time he finished second to Frank in a major event at K-C Raceway.

“It was almost like dï¿½jï¿½ vu from the Dirt Track (World Championship) here a couple years,” said Richards, recalling the 2007 crown jewel. “I was remembering following Chub around here in that race, trying to get close enough to make a move.”

The oil from the car driven by Union, Ky.’s Lanigan, who was running just outside the top 10 when the leaking oil line finally caused his engine to seize up on lap 61, also dulled Hartman’s impressive charge.

“Up until about lap 60 the track was real racy,” said Hartman, who passed McCreadie for fourth on lap 53 and moved to third two circuits later with Birkhofer’s departure. “My car was real good and I was just easing my way up through there. I thought we might have had a shot, but then I guess Lanigan dumped a bunch of oil down and that caused the track to rubber up.”

Four caution flags slowed the event, including a multi-car tangle in turn two on a lap-21 restart that knocked out several contenders. The incident began when Jeep Van Wormer of Pinconning, Mich., and Jonathan Davenport of Blairsville, Ga., came together, sending Davenport sideways and causing Jimmy Mars of Menomonie, Wis., Vic Coffey of Caledonia, N.Y., and Brady Smith of Solon Springs, Wis., among others, to make contact. Davenport was towed off the track while Mars, Coffey and Smith retired after being unable to repair damage during pit stops.

Earlier, 17-year-old Austin Hubbard of Seaford, Del., brought out a caution flag on lap nine when he slapped the homestretch wall and Tim Fuller of Watertown, N.Y., saw his WoO hot streak officially end on lap 21 when a broken rod in his car’s engine sent him spinning off turn three.

The WoO concludes a busy four-day period with a rescheduled 50-lap, $10,000-to-win event Sunday at Eriez Speedway in Hammett, Pa.