Owens tops Bloomquist for $10,000 at Tazewell 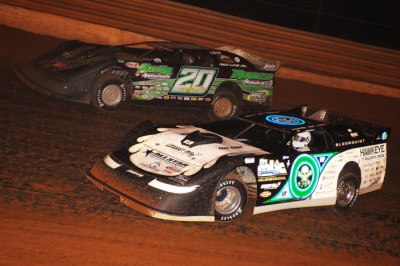 Owens used lapped traffic to overtake Bloomquist on the 21st lap and survived traffic problems of his own to lead the rest of the way for his second Lucas Oil Series victory in his last three starts. Bloomquist settled for his third runner-up finish in a row on the series where he leads the title chase by a comfortable 215-point margin over Owens.

"Scott and I had a real good race out there," said the 37-year-old Owens, who has three Lucas Oil Series victories in 2009 and 12 for his career. "It seemed like we got into traffic quite a bit which happens a lot here, but we got a timely yellow when we needed it. The lapped cars did a great job of letting us by. It's tough out there on this track with traffic, but our car was just really good on the restarts."

Eighth-starting Don O'Neal of Martinsville, Ind., continued a streak of strong performances with a third-place finish while Dale McDowell of Rossville, Ga., and 14th-starting Ray Cook of Brasstown, N.C., rounded out the top five at the quarter-mile oval near the Tennessee-Kentucky border. Polesitter Shanon Buckingham of Morristown, Tenn., faded to an eighth-place finish in a race slowed by seven caution flags.

Steve Casebolt's flat tire slowed the action on lap 23 and Bloomquist stayed right with Owens as the top two drivers pulled away again to battle slower cars. A four-car pack hampered Owens just before the halfway point, but Owens held a four-length margin at halfway. Further back, the third-running Blankenship was feeling pressure from O'Neal.

A lap-54 caution for Eric Jacobsen bunched the field again and O'Neal took third on the restart while Owens kept Bloomquist in check up front. Blankenship slowed with a flat on the 64th lap to set up an 11-lap dash to the finish, and Owens stayed in control to outrun his chassis builder.

Notes: Owens drives a Mike Reece-owned Bloomquist Race Car with a Cornett Racing Engine and sponsorship from Reece Monument, Gantte Appraisals, PRC, Ohlins Shocks, VP Racing Fuels, Red Line Oil, Hoosier Tires, Byrd's Radiator and C&C Trucking. ... Tazewell is Reece's home track. ... Shon Flanary drew a lap-one caution. ... Flanary was also part of a three-car accident on the sixth lap. ... Chad Ogle dropped fluids on the track for a lap-eight yellow. ... The feature lasted about 54 minutes. ... The series gets a Saturday off but returns to action next weekend with an Aug. 28 event at Lawrenceburg (Ind.) Speedway and an Aug. 29 event at Bluegrass Speedway in Bardstown, Ky.