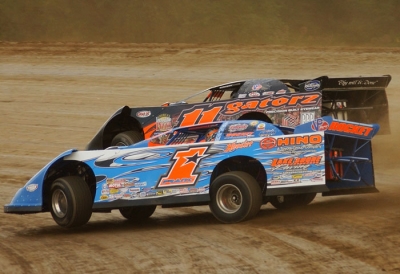 ZANESVILLE, Ohio (Aug. 20) — Chub Frank went back to basics. And as a result, the veteran from Bear Lake, Pa., went back to victory lane on the World of Outlaws Late Model Series.

Frank’s $7,600 triumph in a rescheduled event that was threatened all night by rain also snapped the four-race win streak of Watertown, N.Y.’s Tim Fuller, whose third-place finish left him tied with Rick Eckert of York, Pa., for the WoO modern-era consecutive win record. Ironically, Frank said he got his groove back thanks to a big assist from Fuller.

“Fuller has helped me a lot,” remarked Frank, who recorded his first WoO victory since May 18, 2008, at Lincoln (Ill.) Speedway. “He’s basically the one who said I should go back to the old stuff, run something I know and feel comfortable in. I’m glad I listened to him.”

Seeking an answer for his frustrating season-long slump, Frank, 47, decided on Monday afternoon to call Valone, who had an ’05 Rocket sitting in his shop. Valone agreed to loan the car to Frank, who spent the next three days assembling the machine and re-skinning it with his familiar No. 1*.

“I just had to do something different,” said Frank, who entered Thursday’s program ranked eighth in the WoO points standings with just three top-five finishes in 30 events. “We weren’t getting it done with the new stuff (2009 cars) — it ain’t that the new stuff is bad, we just were struggling with it. I had to go back to something I knew.”

Frank hit paydirt his first night out with the car, roaring off the outside pole to lead the entire event. He built as much as a three-second advantage before crossing the finish line a modest 0.962 of a second in front of Ashland, Ky.’s Steve Francis, who regained the WoO points lead with his sixth runner-up placing in the last eight events driving the Beitler Motorsports Rocket.

Fuller settled for third in the Gypsum Express Rocket after starting seventh. Eighth-starting Bart Hartman of Zanesville, Ohio, was just a couple car lengths behind Fuller in fourth with his Rocket, and polesitter Steve Shaver of Vienna, W.Va., hung on to finish fifth in a Rocket after running second for the race’s first 28 laps.

“It feels great to get back into victory lane,” said Frank, who registered his 15th career win on the WoO. “It’s been a long time. We needed this more than anyone can believe.”

Francis, 41, never seriously challenged Frank after finally overtaking Shaver for second on lap 28. He drew within 0.8 of a second of Frank with five laps remaining but couldn’t get closer.

“I think I had just as good a car as Chub, but by the time we got up there to second late in the race it was hard to pass,” said Francis, who started sixth. “We also kinda killed our right-rear tire trying to get by Shaver, and then when I started closing on Chub I tried to drive harder because I knew the race had to be about over and I ended up losing ground.”

Grabbing the points lead back from Josh Richards of Shinnston, W.Va., who finished a quiet eighth, seemed to be little consolation for Francis. He was frustrated to once again play the bridesmaid, which stretched his winless streak to 17 races since he scored his fifth victory of 2009 on May 31 at Tyler County Speedway in Middlebourne, W.Va.

The 41-year-old Fuller, meanwhile, gracefully accepted his streak-busting third-place finish. He couldn’t pull off any late-race dramatics after reaching third on lap 32 with a neat turn-two split of Shaver and Eddie Carrier Jr. of Salt Rock, W.Va., who finished sixth.

“It was good while it lasted,” Fuller said of his streak. “I wouldn’t change a thing. It was one of the biggest accomplishments of my career. I think we were good enough to win if we had the starting position in our favor, but I have no complaints. I’m glad to see Chub get a win. He really needed one.”

Notes: Chub Frank's entry is sponsored by Corry Rubber, Hino Toyota and Lake Shore Paving. ... Forty-one cars appeared for the event, including five drivers not on hand when the program was postponed on July 23. Nine entered drivers did not return, but they received WoO non-qualifier points because they signed in on the original date. ... Another postponement appeared possible when thunderstorms closed in late in the afternoon, but only a short period of light rain fell, causing a slight delay in the start of hot laps. More storms threatened during heat action, but once again only light precipitation fell and officials kept the program moving in rapid-fire fashion to beat the weather. “Ronnie Moran and his staff deserve plenty of credit for getting the show in tonight,” said WoO director Tim Christman. “Ronnie is a classic old-school promoter who will do everything necessary to beat the elements. All the racers and fans appreciate the effort.” ... Devin Moran of Dresden, Ohio — the teenage son of dirt Late Model legend Donnie Moran and grandson of the track owner —qualified through a heat race in his first career WoO start. He became the second 14-year-old in WoO history to start an A-Main, joining 2009 Rookie of the Year contender Tyler Reddick of Corning, Calif. He finished 16th. ... Four cars finished a lap down in the 11-minute race. ... Three more days of racing are coming up for the WoO competitors with the Aug. 21-22 Buckeye 100 at K-C Raceway in Alma, Ohio, a race paying $20,000 to the winner. The weekend wraps up Sunday at Eriez Speedway in Hammett, Pa.