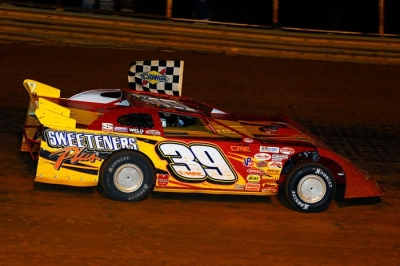 Regaining the lead when Don O'Neal had suspension problems with 22 laps remaining, McCreadie led the rest of the way for a $20,000 victory, his first of the season with the Lucas Oil Late Model Dirt Series and fifth of his career. The driver who missed the first half of the season recovering from serious injuries suffered at January's Chili Bowl Midget Nationals was glad to take another step toward completely normalcy with a victory at the high-banked, 4/10-mile oval. | Slideshow

"Man, I can't thank the fans enough for their support when I was hurt," McCreadie said. "It's been a frustrating road to get here, but I feel we have turned the corner. This track is tough not only on the body but the car was well."

Scott Bloomquist of Mooresburg, Tenn., remained winless on the series but extended his series points lead to 235 points in finishing second while Jimmy Owens of Newport, Tenn., moved to second in points with his third-place finish. Tenth-starting Chris Madden of Gray Court, S.C., was fourth and Ray Cook of Brasstown, N.C., rebounded from a mid-race scramble to finish fifth.

O'Neal, who started fourth and took the lead from McCreadie on the 13th lap, dominated the race's middle stages until breaking a J-bar on his machine on the 78th lap, robbing the Martinsville, Ind., driver of a chance at his richest victory in three years.

O'Neal remained in control through the first half of the race through a pair of cautions for Tommy Kerr (lap 20) and Joe Armes (lap 38), and the race was tightening up with O'Neal, McCreadie, Owens and Bloomquist when a third caution flew for Eric Jacobsen on lap 45.

A three-car collision on the restart involving the fifth-running Casebolt, Cook and Kerr moved 18th-starting Mike Marlar of Winfield, Tenn., into fifth while O'Neal stayed in command.

O'Neal entered traffic by the 60th circuit during a long stretch of green-flag racing as the top five got spaced out with 25 laps remaining. O'Neal looked unbeatable when he broke in turn two, slowed and cruised to the infield.

McCreadie had to fend off a pair of Volunteer stalwarts in Bloomquist and Owens the rest of the way, and he was up to the task in leading the final 22 laps.