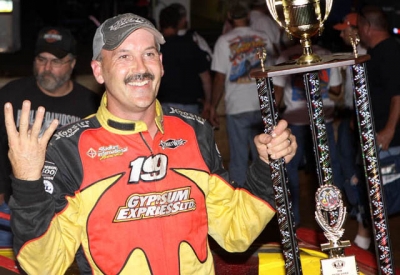 The $10,600 triumph was historic for the 41-year-old Fuller, who equaled Rick Eckert’s modern-era WoO consecutive-win record of four established in 2006. He will attempt to set a new mark on Aug. 20 when the tour visits Muskingum County Speedway in Zanesville, Ohio. | Slideshow

“This is just unbelievable,” said Fuller, who pushed his WoO career win total to seven by completing a sweep of the three-race Mid-Atlantic swing. “I don’t know what to say. No one would’ve ever expected this after our rough start in Late Model racing in 2007.

“To be able to tie Rick Eckert — who’s done so many things in Late Model racing — for a World of Outlaws record just blows my mind. This ranks right up there at the top of my accomplishments, that’s for sure.”

Fuller showed just how things are going his way when he drew the pole position for the second consecutive night. He was outgunned for the lead at the initial green flag by front-row mate Josh Richards of Shinnston, W.Va., but he used the outside lane through turns three and four to sail by Richards and gain control for good on lap eight.

Not a single driver threatened Fuller’s Gypsum Express Rocket car for the remainder of the race, which was slowed by a single caution flag, on lap 44, when Steve Francis of Ashland, Ky., relinquished third place — and the WoO points lead — with a blown right-rear tire.

Richards, 21, settled for a distant runner-up finish in the Seubert Calf Ranches Rocket, 2.623 seconds behind Fuller. The performance elevated Richards back into the WoO points lead by six points over Francis, who finished 10th after pitting to change his car’s tire.

Jason Covert of York Haven, Pa., climbed forward from the 11th starting spot to place third in Barry Klinedinst’s Rocket. He picked up two spots running the outside groove after the lap-44 restart.

Fuller credited his powerful run to the softer-compound Hoosier tires that he decided to bolt on his car. He knew his choice was correct when his machine stuck like glue to the high side of the half-mile oval.

“I was following Josh until I got up on the top (on lap eight) and dragged him in (to turn three) about three car lengths,” said Fuller, who uses a Custom Chevy engine. “When my car stayed up there, I said, ‘This is over.’ He sealed his tire up a little bit and mine just kept eating up there in the loose stuff (cushion).”

Fuller pulled away to lead by as much as a full straightaway even while dealing with lapped traffic. He lapped up to the 12th-place car.

“And I could’ve went faster too – that’s the sad part,” Fuller said with a sheepish grin. “Smoke (his crew chief Mike Countryman) kept calming me down (with infield signals), and trying to save my tires. We had gone softer with our tire, so I didn’t know what it was gonna look like.”

Richards simply had no answer for Fuller’s onslaught.

“I felt like we had a really good car,” said Richards. “But when we were leading the race I knew as good as Fuller’s been that he’d be coming, and sure enough he passed me. After the race I found out he was on a little bit softer tires, but honestly, the way he’s been going, I don’t think tires would’ve made a difference. I’m just ecstatic with second.”

“We broke a birdcage when I got on the outside of Josh and made that big run,” said Francis, who started seventh. “The right-rear wheel got to running back-and-forth, and eventually it got back into the body and the quarter-panel cut the tire down.

“I knew what was going on when I came back out, so I kinda had to take it easy to make it to the finish. At least we were able to salvage a 10th.

“We all know that as close as this points deal is between me, Darrell (Lanigan) and Josh, it’s gonna come down to a little bit of luck,” he added. “Maybe I had my bad luck tonight and that’s the worst it’ll get.”

Union, Ky.’s Lanigan, meanwhile, experienced a rare off-night. He used a provisional to start the race and was never a factor, going down a lap to Fuller on lap 19 and finishing 17th to fall 34 points behind Richards.