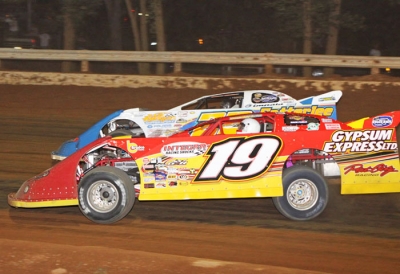 BEDFORD, Pa. (Aug. 14) Tim Fuller continued his World of Outlaws Late Model Series hot streak on Friday night at Bedford Speedway. But in order to register a third consecutive victory on the national tour, the 41-year-old from Watertown, N.Y., had to work extra hard in the half-mile fairgrounds oval’s 50-lapper. | Slideshow

Coming off back-to-back flag-to-flag triumphs, Fuller appeared primed for another dominant performance after he drew the pole position. But he was outgunned for the lead at the start by Gregg Satterlee of Rochester Mills, Pa., and shortly thereafter lost second to defending WoO champion Darrell Lanigan of Union, Ky.

Fuller dug deep, however, rallying to pass Satterlee for the lead on lap 28 and then march on to a win worth $10,650. He became just the fifth driver since 2004 to capture three straight WoO victories.

“It’s hard to win just one World of Outlaws race, so to win three in a row — man, I never expected to do this,” said Fuller, a former Mr. DIRTcar big-block modified champion in his third season as a WoO regular. “But this is what it’s all about — for the crew guys that work so hard, the car owners who pour so much money into this, and for me. I’m making some money that I didn’t make in the spring when we were having some bad luck.”

Fuller will attempt to equal the WoO modern-era record of four consecutive wins — set in 2006 by Rick Eckert of York, Pa. — Saturday at Hagerstown (Md.) Speedway.

Fuller steered his Gypsum Express Rocket car across the finish line 1.232 seconds ahead of Ashland, Ky.’s Steve Francis, who was a runner-up in the Beitler Motorsports Rocket for the second consecutive night and fifth time in the last six events.

Lanigan settled for third place in his Lanigan Autosports Rocket — the same position in which he started — and seventh-starter Josh Richards of Shinnston, W.Va., placed fourth in the Mark Richards Racing Enterprises Rocket, keeping the WoO points standings razor-close for another race. Francis left Bedford leading the standings by 10 points over Richards and 14 points over Lanigan.

Satterlee, meanwhile, faded to a fifth-place finish in his family-owned Rocket car after leading laps 1-27. It was a career-best WoO finish for the rising 24-year-old, who wished he had selected a bit harder American Racer tire compound but was happy with his performance nonetheless. Satterlee proved to be a formidable foe for Fuller.

“The first 15 laps or so (Satterlee) was just locked down to the ground and I said, ‘There’s no way I’m gonna pass him,’ ” said Fuller, the 2007 WoO Rookie of the Year. “Satterlee just kept drawing away and I was driving over my head just to try and keep up with him, so I overheated my (Hoosier) tires and that’s when Lanigan got me (for second on a lap-nine restart).

“I just had to calm down a little bit and let things come to me. On the next restart (lap 14) I was a little bit more on the ball and I got Lanigan back, and then Satterlee started to slow down and I drew in on him. You could see he was starting to hang in the corners and that’s how I got under him (for the lead on lap 28).”

Fuller’s biggest late-race obstacle wasn’t the lap-48 caution flag for Jason Covert of York Haven, Pa., who pulled up lame in turn four with a flat right-rear tire and charging from the 21st starting spot to fifth place, but rather a hairy moment in lapped traffic.

“Russ King (the race’s highest-finishing rookie) really cut me a break when I was lapping him,” said Fuller, who recorded his sixth career WoO win. “I pinched him off hard to get to that bottom (in turn one) because that’s where you had to be, so he could’ve easily turned me. It could’ve been ugly, but he got out of there hard and didn’t race me. A move like that is why I hope he wins the Rookie of the Year.”

Francis, 41, slipped by Lanigan for third on lap 30 and grabbed second from Satterlee on lap 33, but the 2007 WoO champion never got close enough to Fuller to make a serious bid for his sixth victory of the season.

“I think we had a shot at (Fuller) until me and Darrell (Lanigan) hit going into three (on lap 20),” said Francis, who started sixth. “It knocked all the bracing out of the right-front (bodywork) of my car, so it kept catching on the right-front wheel and I couldn’t run two consistent laps in a row.

“But really, if I was gonna pass Fuller, it would’ve been a deal where I would’ve had to catch him in lapped traffic or when he jumped over that cushion in turn four. Fuller’s just a little better than us right, so we’ll take second and go on.”

Four caution flags slowed the event, including one on lap nine for a spin in turn two by Rookie of the Year contender Jordan Bland of Campbellsville, Ky., and another on lap 14 for the slowing car driven by Eckert, who pulled into the pits with terminal problems under the hood.

Joining Eckert in the pit area before the checkered flag was his fellow Bloomquist Race Car campaigner, Brady Smith of Solon Springs, Wis., who retired on lap 33 with a broken motor.

Missing from Bedford’s staff on Friday night was track co-promoter J.R. Keifer, who was at his wife Mary Ann’s hospital bed in Pittsburgh. Mary Ann suffered serious elbow, wrist and leg injuries in a motorcycle crash near Bedford on Sunday night.

Time trials were marred by a wild accident involving Jamie Lathroum of Mechanicsville, Md., whose car dug into the track surface and flipped over the outside guardrail between turns three and four. His machine landed on its wheels and he quickly climbed out under his own power without injury.