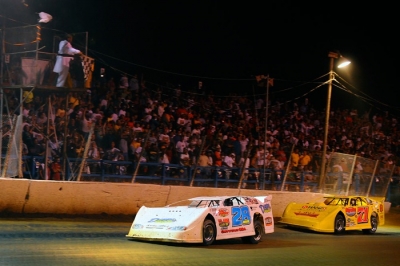 UNION, Ky. (Aug. 8) — As he raced toward the front of the field in the 27th annual Sunoco Race Fuels North-South 100, 15th-starting Jimmy Mars of Menomonie, Wis., wasn't sure he was going to have time to catch race-dominating Don O'Neal of Martinsville, Ind.

It turns out his timing couldn't have been more perfect. | Complete North-South 100 coverage

Catching O'Neal just before the white flag, Mars made a last-lap move on the backstretch to take the lead heading into turn three and raced to a checkered flag at Florence Speedway that gave him a second consecutive $50,000 victory.

The rally that stunned O'Neal and an overflowing crowd at the half-mile oval in northern Kentucky set off a raucous celebration among the M-B Customs Chassis supporters in the infield as the limited-edition chassis brand continued its assault on the Dirt Late Model world.

"This is unreal," Mars said after his champagne-spraying celebration in victory lane. "It's something you're always hoping for every time you go to the track, that you can run good and maybe have a chance to win. Things are going good. Luck's on our side by far right now. The car's real good. Just everything is falling into place."

While things fell into place for Mars, the world seemed to be falling on O'Neal, who took the lead from polesitter Joe Armes on the 24th lap and cruised most of the race, building leads as big as a full straightaway in searching for his richest career victory.

While a beaming Mars gave his victory lane interview, O'Neal pulled his No. 71 onto the frontstretch as the runner-up and looked like he'd been blindsided — and not just because of the forehead bandage covering eight stitches after a shop accident. "We were good," O'Neal seemed to say over and over. "We just needed it to be 99 laps."

O'Neal's second-place finish sunk his payoff to $10,000 while seventh-starting Scott Bloomquist of Mooresburg, Tenn., who ran second most of the way, settled for third in Kentucky's richest Dirt Late Model event. Outside front-row starter Earl Pearson Jr. of Jacksonville, Fla., overcame a terrible start that dropped him into the middle of the pack before charging back to finish fourth, and Jimmy Owens of Newport, Tenn., who started alongside Mars in the eighth row, rounded out the top five.

Mars adds his $50,000 earnings for his third career Lucas Oil Late Model Dirt Series to $50,000 he earned one Saturday earlier at Cedar Lake Speedway in New Richmond, Wis., for the unsanctioned USA Nationals.

The victory also lengthened a stunning 10-month stretch for the M-B Customs Chassis, a piece designed along with fellow driver Brian Birkhofer of Muscatine, Iowa, and Jimmy's brother and long-time crew chief, Chris Mars. Although just two M-B cars are in competition, they've won an incredible eight of the last 10 Super Late Model events paying more than $20,000 to win going back to last season. Mars also has 12 victories overall in 2009, including a $30,000 triumph at the World of Outlaws Late Model Series-sanctioned Firecracker 100 on June 27 at Lernerville Speedway in Sarver, Pa.

Capturing another of racing's crown jewels wasn't lost on Mars, who burst on the national scene in 1997 with a $100,000 victory in Eldora Speedway's Dream.

"As long as I've been racing out on the road and (been) able to come to the North-South and I've been in 'em and I've watched 'em and I've run good in 'em before. I've seen that big trophy," Mars said. "Me and Brian were talking the other night and I'm like, 'I don't have a trophy that's taller than me.' ... to see that thing, that's just unreal. I mean, you look at the history behind this race and the drivers that have won it, it's cool to have our name on that."

At the outset of the 100-lapper, unheralded Joe Armes of Petros, Tenn., started on the pole and pulled away early while the third-starting O'Neal moved up to challenge. After taking a few peeks under Armes over the first 20 laps, O'Neal went underneath for good on the 24th lap between turns three and four and was already pulling away when Will Vaught slowed on the 31st lap for the race's lone yellow flag.

With clear racetrack, O'Neal led the field by a full straightaway by the 40th lap while fourth-starting Steve Shaver of Vienna, W.Va., held second over Bloomquist with Pearson chasing the top three.

O'Neal ran unchallenged through the middle stages while Bloomquist finally slipped by Shaver on the 46th lap, and Pearson moved up to battle Bloomquist for the second spot lap-after-lap far behind the leader.

It first appeared Owens — up to seventh after 40 laps — might be the driver to watch from deep in the field, but Mars took fifth from Owens by the 60th lap and had Armes in his sights. Mars was closing in on the Bloomquist-Pearson battle for second by lap 70 but he was more than a straightaway behind the cruising O'Neal.

"The car just felt awesome. I was able to maneuver on the track down low probably a little better than those other guys, and I waited for my openings to happen," Mars said. "Earl and Scott, they had a heckuva a race going. I was kind of biding my time which one was going to get in front of the other one so I could make my move back to the bottom, and it finally all worked out."

Not without a moment to spare, though, as Mars didn't clear Bloomquist until the 94th lap and still faced a half-straightaway margin to catch the leading O'Neal, who had lost part of his lead but looked no less unbeatable with five laps remaining. Mars started letting it all hang out in his No. 28.

"I kept fooling around with my brakes and I was able to keep driving it in deeper and deeper," Mars said. "The gap kept closing. O'Neal got up behind them lapped cars and I thought for sure he was going to go down low and at least try to block the bottom and the top, but he elected to stay up high, which I was thankful for that. I was able to run extremely low and turn right around the corner. The thing was just awesome."

Mars got nearly underneath O'Neal exiting turn four heading for the white flag, but O'Neal couldn't summon anything to repel the challenge.

"I had no clue," said O'Neal, racing without any crew members giving signals from the infield. "I just tried to run my line and not worry about anything. He came from nowhere. No one told me he was coming."

Added O'Neal: "He come a rolling. I went down there lower in turn one and two, but it didn't get the job down. When you're out front riding like that and they sort of come from nowhere, we did all we could do."

Notes: Mars drives an M-B Customs Chassis with a Pro Power Engine and sponsorship from Deppe Enterprises, T.L. Sinz Plumbing, Keyes Chevytown and Baileigh Industrial. ... Scott Bloomquist extended his Lucas Oil Late Model Dirt Series points lead with his third-place finish over Earl Pearson Jr., his closest pursuer in the points. ... Pearson got into mud near the outside wall on the start and fell all the way back to ninth from his outside front row starting spot; he was back into fourth after the lap-31 restart. ... Fourteen of 24 starters finished on the lead lap.