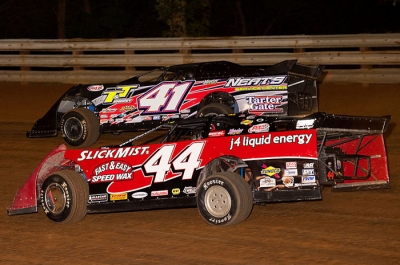 Pearson, Neat's traveling mate and a four-time series champion, finished a close second followed by Owens at the half-mile oval. Steve Francis of Ashland, Ky., was fourth and Jason Covert of York Haven, Pa., rounded out the top five.

"Those guys (Pearson and Owens), they are just a great group of guys, and to beat them is special," said Neat, who piloted a 2-race-old MasterSbilt Race Car. "They are two of the best in the business."

Neat and Pearson made up the front row with Neat building a comfortable lead before entering traffic on the 15th lap. Owens took second from Pearson on the 19th lap and a lap-23 caution slowed the action when Jack Pencil's car was heavily damaged with hard contact with the turn-three guardrail.

On the restart, another yellow quickly appeared when series points leader Scott Bloomquist of Mooresburg, Tenn., ended up sideways off turn four after contact with at least one car.

After that second and final yellow, Owens kept the heat on Neat with Pearson keeping touch with the leaders.

Neat edged away a bit as Pearson pressured Owens, and Pearson took the second spot with three laps remaining. Neat's lead was cut to a car length at the white flag, but he held on to complete the flag-to-flag victory.