Pearson fights off Owens for victory at Wheatland 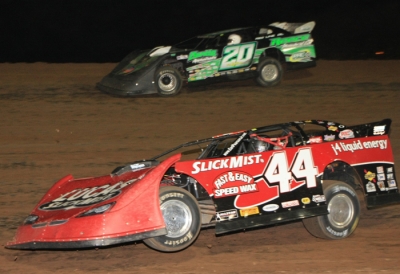 The high-running Owens pulled alongside Pearson for the lead exiting the corners, then edged ahead to officially lead the 45th lap before Pearson quickly regained the point. Pearson then used David Breazeale's lapped car as a pick in the final laps to seal his 16th career series victory, his first since March 21 at Brownstown (Ind.) Speedway.

Owens settled for second followed by 11th-starting Jimmy Mars of Menomonie, Wis. John Anderson of Omaha, Neb., who started outside the front row and led nine of the first 10 laps, was fourth and Dale McDowell of Rossville, Ga., charged from 17th to round out the top five. Polesitter John Blankenship of Williamson, W.Va., faded to finish 14th.

"The fans they saw a hell of a race," said the 37-year-old Pearson, who is tied for the all-time Lucas Oil Series victories lead with points leader Scott Bloomquist of Mooresburg, Tenn. "I knew (Owens) was there all along in the last part of the race. We raced each other clean. I felt like I gave him plenty of him and he likewise, we've traveled up and down the road together with the Lucas Oil Series all year long and he's tough to beat, but we were able to get by Breazeale and got him pinned in there between us and we able to hang on for the win.

"My hat's off to Earl. He drove a heck of a race out there," said the 37-year-old Owens. "We weren't very good on the bottom tonight, but up top the car was flying. It would take me a few laps after those last two cautions to get it going and really thought we were going to pass him, but when the (Breazeale) was there it was just one of those things and he was running my line."

At the outset, Anderson got the jump on Blankenship and built a comfortable lead before a lap-six caution for debris. On the restart, Wendell Wallace of Batesville, Ark., edged ahead to lead the eighth lap, but Anderson went back out front before Wallace slowed with a flat tire that knocked him from contention.

Pearson used the restart to rocket into the lead before Brad Neat's lap-11 spin, and Pearson, Mars and Don O'Neal of Martinsville, Ill., held the top three spots while Owen worked his way to the front. At the halfway point, Pearson had a comfortable led on Mars as he worked lapped traffic and still showed the way with 20 laps remaining.

Will Vaught's lap-34 flat tire bunched the field, and two laps later, Dan Schlieper brought out the final caution with 14 laps remaining. On the restart, O'Neal got the worst of a chain-reaction accident involved McDowell and Bloomquist, forcing O'Neal to restart on the tail.

That set up Pearson's final stretch of racing as he outdueled Owens for the victory.