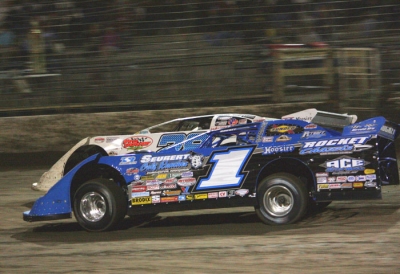 In order to make the Wild West Tour event at the high-banked, quarter-mile oval his series-leading sixth victory of the 2009 season, grab sole possession of the WoO points lead and pocket a check worth $10,600, Richards had to survive a decidedly hairy moment in lapped traffic on lap 31. | Slideshow

Richards, 21, of Shinnston, W.Va., was fighting back a bid for the lead by Steve Francis of Ashland, Ky., when the slower car driven by Chub Frank of Bear Lake, Pa., spun sideways across turn four in front of the pacesetters. Frank bounded over Richards's nose and into the infield berm, sending up a thick cloud of dust from which both Richards and Francis slowly emerged with damage evident to the hoods of their cars.

With the caution flag thrown for the dangerous situation caused by Frank's spin, Richards and Francis maintained their positions at the front of the field for the ensuing restart. Richards stayed there for the remainder of the distance without receiving a serious challenge, while Francis, who entered the evening tied with Francis for the WoO points lead, gradually faded before a lap-44 pit stop to change a right-rear flat tire left him 12th at the finish.

“It was a fast track tonight and I just tried to keep my nose clean, but obviously I got scraped up,” said Richards, gesturing toward the crinkled hood on his Seubert Calf Ranches Rocket that resulted from contact with Frank's sliding machine. “Chub got bent and came across the track right in front of me, so I had nowhere to go. I just tried to keep rolling the best I could and luckily we got out it.”

Jimmy Mars of Menomonie, Wis., who won the recent Firecracker 100 at Lernerville Speedway in Sarver, Pa., slipped by Francis's ill-handling Beitler Motorsports car for second place on lap 38 and chased Richards to the finish line. He couldn't mount a challenge after two caution flags flew on lap 44 and settled for the runner-up spot in his M-B Customs Chassis, 1.292 seconds behind Richards.

Brady Smith of Solon Springs, Wis., finished third in his Team Zero by Bloomquist car after his late attempts to overtake Mars fell short. The 32-year-old Smith, who scored his first career WoO victory in last year's event at River Cities, moved up from the fifth starting spot to register his 10th top-five finish of his first touring season.

Richards, who started third, felt fortunate to escape the Frank incident with his car largely intact.

“I was pretty frustrated after it happened,” said Richards, who grabbed the lead for good with a lap-11 pass of Union, Ky.'s Darrell Lanigan. “(Frank) came right over my nose, so I didn't know how much damage there was. It rolled around OK under caution, but I was nervous driving up into (turn) one on the restart. I was worried that some of the body might get into the tire or something.

“The breaks just went our way tonight. We had some bad luck a couple nights ago (an eighth-place finish at Minnesota's Deer Creek Speedway after sustaining a flat tire), but it turned around tonight.

“It feels good to already match what we did last year,” he added, referring to equaling the six victories he totaled during the 2008 campaign. “But we've still got a long way to go.”

The victory was the fifth in the last nine WoO feature for Richards. It was also his 18th career triumph, breaking him out of tie for third with Scott Bloomquist of Mooresburg, Tenn., on the national tour's win list since 2004.

In addition, Richards left North Dakota with an 18-point lead over Lanigan, who started from the pole and led laps 6-10 but fell to seventh at the finish. Francis tumbled to third in the standings, 24 points behind Richards. Mars, meanwhile, gladly accepted his $5,000 bridesmaid finish.

“I'm happy with second,” said Mars, who started fourth. “Josh was fast and ran a good race. My car just got so tight.”

Mars also had no qualms with the officials' decision that kept Richards and Francis at the front of the pack after they jammed up in the wake of Frank's spin. The incident did produce some varied opinions that led to postrace debate.

Though Mars stood to gain the most if officials ruled Richards and Francis had to restart at the rear of the field – after all, he would have been elevated to the lead – the 37-year-old “didn't have a problem with it,” he asserted. “The leaders need to have some sort of protection in a situation like that with a lapped car.”

Four cautions flags and one red flag slowed the event.

The race's most significant crash occurred on a lap-14 restart when a mid-pack scramble caused River Cities regular Brad Seng of Grand Forks, N.D., who had won the track's last two features, to roll over off turn four. Seng's car came to rest on its roof, but he climbed out of the cockpit uninjured after safety crews righted the machine.

Other drivers towed off due to damage sustained in Seng's crash were Kelly Boen of Henderson, Colo., and Tim Fuller of Watertown, N.Y., who recorded his first career WoO win at River Cities in 2007 but struggled on Friday night. Fuller had to use a provisional after being struck down by a flat tire while leading a B-Main.

Finishing in positions 6-10 was Clint Smith, who started 10th; Lanigan; Al Purkey of Coffeyville, Kan., who earned the $500 WoO ‘Bonus Bucks' cash for being the highest-finishing driver who hasn't won a tour A-Main and wasn't ranked among the top 12 in the points standings; Russ King of Bristolville, Ohio, who earned a $250 bonus as the race's top Rookie of the Year contender; and Frank, who survived the lap-31 incident and two trips to the pit area to salvage a top-10 finish.

Pat Doar of New Richmond, Wis., raced off the outside front row to lead laps 1-5, but he retired during a lap-14 caution period due to a broken lower shaft on his car's rearend.

After the track surface was made faster by a short burst of light rain that delayed the start of hot laps, Eckert established a Late Model track record with a lap of 11.756 seconds. He bettered the standard of 11.950 seconds set by Shannon Babb of Moweaqua, Ill., on June 12, 2007.

The Wild West Tour is scheduled to continue on July 14, at Gillette (Wyo.) Thunder Speedway and July 16, at Dakota State Fair Speedway in Huron, S.D.