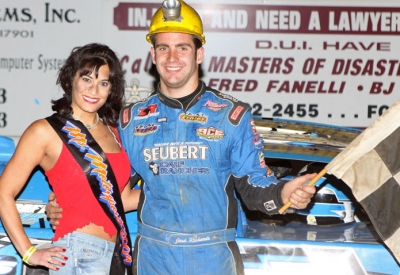 FORESTVILLE, Pa. (June 24) — Josh Richards finally finished what he had started at Big Diamond Raceway. One year after leading more than half of the 3/8-mile oval's inaugural World of Outlaws Late Model Series event but falling short of victory, the 21-year-old sensation from Shinnston, W.Va., returned to the track on Wednesday night and pulled off a late-race pass of Gettysburg, Pa.'s Jeremy Miller to win the Jack Rich Inc. Coal Country 40. | Slideshow

“This is definitely better than last year,” said Richards, who finished third after leading laps 1-29 of the tour's 2008 event at Big Diamond. “I was pretty frustrated after losing that race, so it feels good to come back here and get a win.”

Richards registered his third triumph in five WoO Great Northern Tour events, following his back-to-back wins in the two Canadian shows that kicked off the busy swing. It was his fourth overall victory of the 2009 season, moving him within one win of Ashland, Ky.'s Steve Francis for the series lead in that category.

The $7,600 checkered flag also gave Richards a share of the WoO points lead with defending champion Darrell Lanigan of Union, Ky., who finished third. Richards had entered the evening's action third in the points race, six points behind the deadlocked because of Lanigan and Francis, who slipped to third in the standings after finishing fifth.

Richards, who started fifth, secured second behind Miller when he passed Tim Fuller of Watertown, N.Y., on a lap-three restart. He chased the race-long pacesetter until tossing his Seubert Calf Ranches Rocket car to the outside of the track on lap 34, executing a powerful sweep to grab the top spot from Miller for good.

“When Jeremy started slowing down I knew I had to go to the top to pass him,” said Richards, who donned a coal-miner's helmet for the postrace photos following his 16th career WoO win. “It was rough up there, so I was either gonna go up there and pass him or I was gonna roll the bumper under the car. Fortunately when I went up there I found a spot where it was smooth enough for me to make some time and the move worked out.”

Miller, 38, settled for runner-up money in his USA Spares Inc. Victory Circle M1 Chassis, 1.726 seconds behind Richards at the finish. It was Miller's first top-five finish in WoO competition since he recorded his only tour win on April 11, 2008, at Virginia Motor Speedway.

“I was just a little bit softer (on tire-compound choice) than (the other top finishers) and it cost us,” said Miller, who started from the pole position. “If the black (line) doesn't come (on the track) we're heroes, but it did start coming around lap 20 and I knew we were in trouble. I started slowing way down and I was just waiting for someone to pass me.

“But honestly, I'm very happy to finish second against the caliber of drivers you run with in an Outlaw race. We're the lone soldier here running a Victory Circle car, American Racer tires and a Bullock engine, so I have to be happy with how tonight turned out.”

Lanigan, who started seventh, had to be satisfied with a third-place finish after a lap-35 caution flag for the stopped car driven by Clint Smith of Senoia, Ga., short-circuited the bid for the lead that he appeared to be mounting. He ran the last 15 laps with brake problems hampering his Fusion Energy Rocket.

The 41-year-old Fuller finished fourth in his Gypsum Express Rocket, right on Lanigan's rear bumper at the conclusion of the A-Main. Fuller grabbed second at the initial green flag from his inside second-row starting spot and was challenging Miller for the lead when a caution flag flew on lap four for a spin by Chad McClellan of Stoystown, Pa., but he struggled on restarts, losing positions to Richards and Lanigan (lap seven).

The eighth-starting Francis ran quietly in fifth from lap seven to the finish, giving him a series-leading 11th top-five performance this season in his Beitler Motorsports Rocket.

Finishing in positions 6-10 was 17-year-old Austin Hubbard of Seaford, Del., who earned the $500 WoO ‘Bonus Bucks' cash for being the highest-finishing driver who hasn't won a tour A-Main and isn't ranked among the top 12 in the points standings; D.J. Myers of Greencastle, Pa.; Chub Frank of Bear Lake, Pa., who started 17th; Jim Yoder of Selinsgrove, Pa.; and fourth-starter Jeff Rine of Danville, Pa.

Notes: Four caution flags slowed the race, but there were no serious incidents. ... A field of 46 cars assembled for the event, an increase of a dozen entries from Big Diamond's inaugural Coal Country 40 in 2008. ... Among drivers failing to make the feature lineup: Tony Knowles, Jim Bernheisel, Bryan Bernheisel, Dustin Hapka, Randy Stoudt, April Farmer, Luke Hoffner and Jordan Bland. ... The WoO Great Northern Tour will conclude with three evenings of competition at Lernerville Speedway in Sarver, Pa. The postponed Showdown in Sarvertown (a consolation race and 50-lap main event held-over from May 5) will be completed on Thursday, and the $30,000-to-win Firecracker 100 presented by GottaRace.com will take center stage on June 26-27.