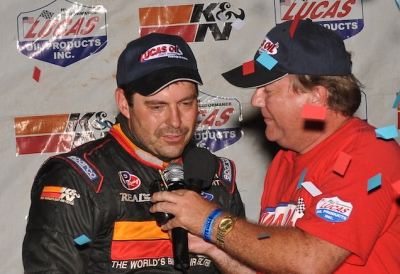 Yellow flags were the only thing that could slow Cook's progress as he outran Ricky Weeks of Rutherfordton, N.C., on the final night of the Summer Sizzler Tour portion of the Lucas Oil Series schedule, which closed with its sixth winner in six races at six tracks in the South. | Postrace notebook | Slideshow

On a night with passing at a premium on the half-mile Fayetteville oval, Cook knew that winning a heat and earning the pole position for the main event was key.

Cook just concentrated on keeping Weeks behind him throughout a race slowed by nine cautions.

"If you come around and catch the lapped cars too quick, then you can't pass them and the second-place man can make a move on you," Cook said. "I could get away from (Weeks) and my crew man (Danny Dishman) would tell me and I'd slow back down. I tried to run a good lap and then a pace lap. I was just trying to be there at the end. The car felt good the whole time, but I didn't know what (the tires) looked like — had probably another 15 laps in it."

In just his second career start on the series, Weeks posted a second-place finish.

"There early I showed him my front end and he went to protecting it. I guess the best car won. I had a good run, though, I ain't complaining. We needed the boost and the money," said Weeks, a five-time Carolina Clash Super Late Model Series champion. I think we were actually better than he was on entry, but I'd have to slow down so much on him to get in, and then he'd take off. I'd be sliding when he'd be getting back in his gas."

Series points leader Scott Bloomquist of Mooresburg, Tenn., was running eighth until a flat tire on the last lap dropped him to 11th.