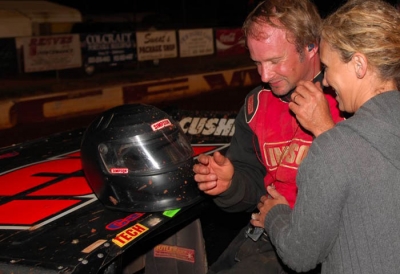 SWAINSBORO, Ga. (June 18) — Leading only the final lap after a fellow Georgia got a flat tire, fast qualifier Casey Roberts of Toccoa, Ga., earned $7,000 at Swainsboro Raceway for his first career victory on the Lucas Oil Late Model Dirt Series.

Roberts, who launched his lucrative week with a $5,000 victory in an unsanctioned event at Rome (Ga.) International Speedway, started on the pole but slipped back to third in the race's late stages before coming out on top for one of the biggest victories of his career.

Roberts came out on top in a 40-lap race where tire wear became critical in the race's late stages.

"Man, this is great. We had a great car for sure," Roberts said. "As soon as we fired on that initial start I knew Dale (McDowell) was on softer tires than we were. We kind of gambled and it paid off. I said to myself on the first lap that I was going to ride it out and hope that he used his stuff up."

McDowell, who started outside the front row, indeed took control at the outset and led Roberts throughout most of the race with series points leader Scott Bloomquist of Mooresburg, Tenn., and others in pursuit.

Things got interesting late in the race when the frontrunning cars approached several slower cars, including Don O'Neal of Martinsville, Ind. A bottleneck developed as O'Neal eventually slowed with a flat tire, and the frontrunners narrowly averted disaster in the scramble before O'Neal rolled to a stop in turn four.

McDowell was still firmly in command when the last of three cautions fell on lap-38 for the flat tire on the car of Ed Basey of Evans, Ga. That set up a two-lap dash to the checkered flag, and Roberts was all over McDowell as the green waved.

As the leaders spilled onto the backstretch for the final time, McDowell's right rear tire went flat, and Roberts made an evasive outside pass and beat Bloomquist to the checkered flag. McDowell limped home third while Steve Casebolt of Richmond, Ind., and Josh McGuire of Grayson, Ky., rounded out the top five.

Notes: Roberts drives a Victory Circle Chassis by Moyer with sponsorship from Starrette Trucking, Cushman Paint & Body and PPM. ... Roberts is the two-time and reigning champion on the O'Reilly Southern All Star East Series. ... His richest career victory came in an SAS East event at Thunder Valley Speedway (now Cleveland County Speedway) in Lawndale, N.C., on Nov. 5, 2006, when he pocketed $10,000. ... Besides the flat tires for Don O'Neal and Ed Basey, the only other caution period came on the second lap for Michael Walker and Henry Carter. ...ï¿½ The race was a makeup event of an April 4 rainout. ... Lucas Oil competitors completed the Summer Sizzler Tour of the South with Friday's $7,000-to-win event at Cherokee Speedway in Gaffney, S.C., and Saturday's $10,000-to-win event at Fayetteville (N.C.) Motor Speedway.