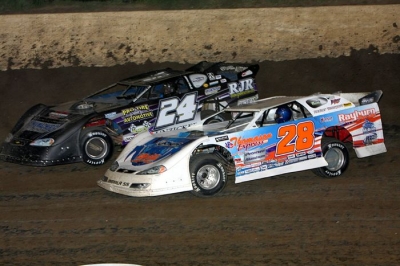 EAST MOLINE, Ill. (June 14) — On a Sunday night when good passes were hard to come by at Quad City Raceway, two-time and reigning series champion Dennis Erb Jr. of Carpentersville, Ill., made the most important one of the night.

Erb squeezed under race-long leader Ryan Unzicker of El Paso, Ill., just before the midpoint of the 40-lap main event and pulled away for a $6,000 victory at Quad-City Raceway in the fourth leg of the UMP DIRTcar Summernationals. | Updated series statistics | Complete Summernationals coverage

The turn-four move that came with a little contact when Erb drifted in front of Unzicker on the frontstretch wasn't well-received by the runner-up, whose restrained retaliation came with a love tap on Erb's rear bumper as the winner pulled onto the infield scales after the race.

"He slid up," said Unzicker, who had cooled after showing a little frustration immediately after the race. "He might've thought he had me cleared, but it's all good and we'll go on to the next night."

Erb said his car was better than Unzicker's looser-handling machine — and proved it by building a half-straightaway lead after taking command. "I had pretty good runs underneath there, and we just went down in the corner there and I shot down underneath him," Erb said. "That's the way the situation was with the racetrack. We just had to do the best with what we had there. We just went for it when we did."

Drivers with a bird's-eye view of the action termed Erb's move aggressive.

"Dennis got by him," said third-place finisher Randy Korte of Highland, Ill., but he kind of had to use him up a little bit to get by him."

Added fourth-finishing Kevin Weaver of Gibson City, Ill., who started on the pole but was never scored better than third: "Dennis made a pass that looked a little rough to me."

"I just thought we had a good car to win," he said. "After that (early) caution, I gave up something. I don't know if the left-rear tire sealed over or not, but I had a real nice smooth line before that caution, and as soon as that caution came out, I just lost the feeling in the car and I had to drive it a little different."

Erb, among drivers who skipped Saturday's race at Kamp in a protest of poor track conditions, rebounded with his 11th career Summernationals victory. He unofficially moved back into second in the points chase, just seven points behind the leader Weaver after four of 27 events scheduled through July 11.

"We get prepared for this deal, and we like running each and every night, so we just try to keep our equipment up and keep running and finishing good, and hopefully we'll be there at the end," Erb said in victory lane.

The feature was slowed by three cautions, first for Brandon Sheppard's tour-four spin after a dozen laps and then for Shannon Babb's flat tire a few laps later; the final yellow flag was for debris with seven laps remaining and Erb ahead by a half-straightaway.

The series takes Monday off before returning to action for the fifth leg of the tour on Tuesday at Highland (Ill.) Speedway for a $6,000-to-win event.

Polesitter Richie Hedrick led all the way to get the first of three transfer spots. Also transferring was Brent Kreke and local driver Mike Murphy Jr. By virtue of finishing fourth, Brian Harris earned the track provisional and will start on the tail of the feature. Mike Hammerle was fifth but will get a provisional based on '08 UMP points. There is no B-Main.

Dennis Erb Jr. became the first polesitter to win a heat, cruising all the way in outrunning third-starting Mark Voigt. Fifth-starting Jeep Van Wormer was further back in third while front-row starter Justin Rattliff lost the fourth spot when he cartwheeled in turn one after hitting the cushion, damaging his car's nosepiece. Brandon Sheppard inherited the final transfer spot ahead of Mike Hammerle. Mike Cothron pulled out early with a flat left-rear tire.

Tail-starting Tim Lance overtook Terry Casey on a lap-four restart and rolled the rest of the way. Lance, whose qualifying lap was scuttled when he peeled a left-rear tire off the rim, led Casey the rest of the way while running the high groove. Another starter from the back row, Rodney Melvin, advanced to finish third with fifth-starting Derek Chandler getting the fourth and final transfer spot in a race slowed by two yellows. Jason McBride spun exiting turn four on the second lap to draw the prelim's first caution. Another caution appeared two laps later when leader Steve Sheppard Jr., who took the point in turn two on the first lap after polesitter Mike Murphy Jr. hit the turn-one cushion awkwardly, stopped with a flat left-rear tire and headed pitside.

Outside front-row starter Kevin Weaver got the jump on polesitter Wes Steidinger and raced to a victory in the second heat. Last-row starter Randy Korte advanced in the low groove to finish second, briefly challenging Weaver before moving up to the high groove in the late laps. Steidinger and Scott Schmitt rounded out the four transferring drivers. Brent Kreke was running third when he spun in turn three to draw a caution, and he ended up fifth. That caution turned into a red flag when paramedics in the infield were dispatched to the grandstands. Bryant Dickinson pulled off the track early in the race, and Donny Walden pulled off midway through.

Outside front-row starter Ryan Unzicker took command when polesitter Shannon Babb struggled off turn two on the opening lap and raced away to a 10-lap victory in the caution-free prelim. Fourth-starting Jason Feger later dropped Babb to third while Scott James was the fourth and final car transferring in a tight lead pack. Richie Hedrick was far behind in fifth.

Two-time UMP DIRTcar Summernationals champion Shannon Babb of Moweaqua, Ill., topped 31 qualifiers Sunday in the fourth leg of the series at Quad-City Raceway. Babb, the first qualifier, turned a lap of 13.481 seconds to get the pole position for the first heat race.

The top four drivers from each of the four heats advance to the main event with two drivers from the B-Main and three provisionals filling out the 21-car starting field.

Terry Casey of New London, Wis., enters the event as the series points leader after Saturday night's event at Kamp Motor Speedway, where some points contenders skipped the event citing poor track conditions. ... UMP plans to allow drivers to drop their worst finish among the 27 Summernationals races, so drivers missing the Kamp event will be on even footing for the title chase. .... Casey has 167 points to lead Kevin Weaver (161), Jason Feger (160), Billy Moyer (155) and Steve Sheppard Jr. (151). ... Brandon Sheppard had problems in hot laps and his No. B5 was pushed off the track. ... Illinois photographer Erik Grigsby serves as flagman at Quad-City, a job formerly held by Illinois driver Donny Walden, who is in action Sunday at the track. ... Quad-City drew a series-low 30 cars, but that's nine cars more than last year's event, which came in the final week of the series. ... Brian Harris, driving Ray Neltner's No. 75, had problems when he took the green in qualifying and pulled to the infield. ... Randy Korte, last year's winner at Quad-City, lost control in turn one and nearly spun, then slowly completed the rest of his lap. The heavy cushion was building up in the turn. ... Tim Lance nearly spun in turn four and recorded a slow lap; his left rear tire was flattened or peeled off the rim. ... Rodney Melvin also lost a left rear. ... Monday is the first day off for the series before it continues Tuesday with a $6,000-to-win event at Highland (Ill.) Speedway.