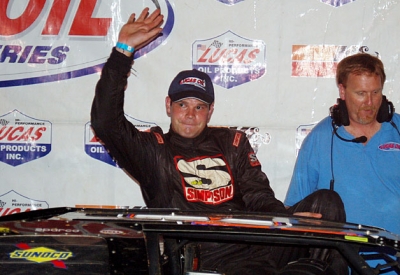 Neat, driving a backup car out of traveling-mate Earl Pearson Jr.'s Bobby Labonte Motorsports shop, beat fourth-starting Wendell Wallace of Batesville, Ark., to the finish at the Middle Tennessee bullring for one of the richest victories of his career.

"I can't thank my crew enough. They worked their tails off this week getting this car ready," said the 29-year-old Neat, who wrecked his primary car in a heat race Saturday at Eldora Speedway in Rossburg, Ohio. "We went down to Bobby's shop on Monday. ... and we worked all week to get ready for tonight, thanks to Earl and his crew for their help. Without their assistance as well we wouldn't be standing here."

After waiting through two rain delays, the main event started with Neat getting the jump on Burroughs while Wallace quickly moved into the second spot. After a lap-eight caution for a spin by Jimmy Owens and a lap-nine yellow for Tommy Kerr, Neat pulled away from a Wallace-Knowles duel while Bloomquist worked into contention.

Neat stretched his lead to a comfortable margin midway through the race, but Dale McDowell's flat tire on lap 24 bunched the field with 11 laps remaining. Neat led Wallace, Bloomquist, Wall and Knowles back to the green flag, but Bloomquist's demise came three laps later when he slowed exiting turn two with smoking car.

Neat stayed comfortably ahead the rest of the way to become the 12th winner in 16 series races.