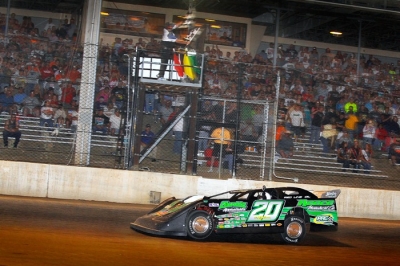 ROSSBURG, Ohio (June 6) — Jimmy Owens couldn't help getting emotional after winning Saturday night's Dream XV at Eldora Speedway. But it wasn't just the immense $100,000 first-place check that caused his voice to crack in victory lane. It was the way he earned it. | Complete Dream coverage

Owens, 37, of Newport, Tenn., authored one of the most memorable drives in the 100-lap race's history. He completed a charge forward from the 19th starting spot in style, passing five-time Dream winner Scott Bloomquist of Mooresburg, Tenn., and NASCAR star Tony Stewart in a single circuit to grab the lead for good on lap 73.

“To be able to pass Scott and Stewart for the win here is really great,” Owens said while trying to catch his breath during the post-race press conference inside Eldora's tower. “To me, it's just a dream come true.”

Though Owens couldn't relax until the checkered flag flew because his Team Zero by Bloomquist car trailed smoke and was losing oil pressure for most of the distance, he easily led Bloomquist's own Team Zero mount across the finish line by more than a straightaway margin.

Stewart, who started from the pole in a Rocket car sponsored by Old Spice, Office Depot and Bass Pro Shops, faded to a sixth-place finish over the race's final quarter after leading laps 10-37 and 61-72. It was the first UMP DIRTcar-sanctioned Dream start of his career at the track he owns.

“It's what I've strived my whole life to do,” Owens said when asked about the significance of seeing his name listed alongside Bloomquist, Moyer and Moran as a Dream and World 100 winner. For that reason as well as his crowd-pleasing march through the pack after using a fast-time provisional to start the race, Owens ranked his Dream triumph as the highlight of his career.

“I think this is gonna go on top for me,” smiled Owens, who also earned a $100,000 check for clinching the 2002 UMP DIRTcar modified title in a dramatic finale at Eldora.

Owens didn't need any last-lap dramatics to pull out a win in the Dream, but he did make some unforgettable moves — especially after the race's lone caution flag flew on lap 51 for Josh Richards of Shinnston, W.Va., who slowed after blowing a right-rear tire and slapping the turn-one wall.

Sitting sixth for the restart, Owens took off and shot through the middle of Birkhofer and Don O'Neal of Martinsville, Ind., to seize fourth on lap 52. He worked by Mars for third on lap 58 and then crashed the much-anticipated Stewart-Bloomquist showdown for the lead, surging by both motorsports titans to assume command on the 73rd lap.

Once Owens decided to disregard the blinking light on his dashboard that indicated his car was losing oil pressure, there was simply no stopping him. Stewart and Bloomquist, who led laps 38-60, could only watch Owens sail by.

“They pulled me a little bit when I got to slacking off because I was watching my oil light,” said Owens, whose car began showing smoke from its rearend around lap 15. “I was afraid the motor was gonna blow up any minute. I finally just said, ‘You know what? If it blows, it blows.' I just started running the car harder and I ran ‘em back down.

I was just fortunate enough that Tony moved out of his groove a little and kinda messed him and Scott both up for me to get around them.”

When Owens finally saw the checkered flag flying, he was certainly glad he hadn't gone ahead with his thought of pulling off the track at the onset of his oil-pressure problem.

“We run Red Line Oil, and my hat's off to them guys because there's no way that car would've made it with anything else,” said Owens. “My (helmet) shield was full (of oil) when we had that caution. I couldn't see where I was going. I was out of tearoffs and started wiping. I finally got my shield clean — and then I don't know if (the car) ran out of oil or what, but it finally quit blowing oil.

“It made it (to the finish), so somebody's looking out for us.”

The caution flag certainly changed the course of the race for the 45-year-old Bloomquist, who built nearly a full straightaway edge after overtaking Stewart for the lead on lap 38. He didn't get away from Stewart on the restart, and he lost second to Owens shortly after his car's air cleaner blew off in turn one on lap 67.

But Bloomquist rallied to regain the runner-up spot from Stewart on lap 75 and stayed there to the finish, albeit without challenging Owens. The $20,000 outing continued a remarkable run of success in the Dream for Bloomquist, who since 2002 has three wins, two seconds and a third (he failed to qualify in 2003).

Finishing in positions 7-10 was Matt Miller of Waterville, Ohio, who ran as high as fifth; 17th-starting Rick Eckert of York, Pa., who was nearly lapped early in the distance but came on after the halfway point to salvage a top-10 finish; O'Neal, who led laps 1-9 off the outside pole; and Earl Pearson Jr. of Jacksonville, Fla., who started 24th after grabbing the final transfer spot in the B-Main with a last-lap pass of two-time and defending UMP DIRTcar national champion Dennis Erb Jr. of Carpentersville, Ill.

Richards, the event's fast qualifier, started seventh but a tire problem caused him to lose nearly 10 spots on the first lap and ultimately lose a lap before his night ended when he brought out the race's lone caution flag.