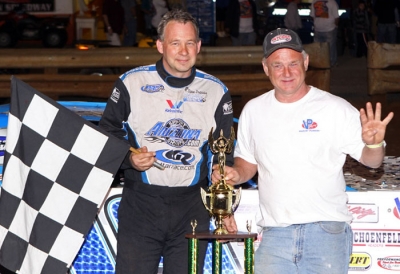 Francis, 41, of Ashland, Ky., was simply the class of the field in the half-mile oval's 28th annual event, roaring off the pole position to lead the entire 50-lap distance without facing a single serious threat. He pocketed $10,750 for his tour-best fourth triumph of the 2009 WoO season and the 24th of his career. | Slideshow

“Tonight I could just kinda float around wherever I wanted to go,” said Francis, who has won more WoO features than any other driver since 2004. “If a guy went wide, I just went wider. My car was just about perfect.”

Two days after seeing an apparent win at Delaware International Speedway slip through his fingers when a cut right-rear tire knocked him from the lead with six laps remaining, Francis had his Dale Beitler-owned car in a league of its own. He easily pulled away after each of the race's four restarts and defeated defending WoO champion Darrell Lanigan of Union, Ky., by 3.815 seconds — nearly a full straightaway margin.

Rick Eckert of York, Pa., advanced from the eighth starting to finish a solid third in Raye Vest's Team Zero by Bloomquist mount. Shane Clanton of Locust Grove, Ga., started and finished fourth — though he climbed as high as second — in his RSD Enterprises Rocket, and 17-year-old Austin Hubbard of Seaford, Del., registered a career-best WoO finish of fifth in his family-owned Rocket.

“Out of a season, you might have a car this good two or three times,” said Francis, who is the only driver with more than one win in the 13 WoO events. “You don't get that kind of feel (inside a car) and also have everything go right — like winning a heat and drawing the pole — very often, so you just take it when you can get it.

“We might go to Tyler County (Speedway in Middlebourne, W.Va.) tomorrow (May 31) and run 20th. That's the way racing is, so we'll enjoy this as much as we can.”

Francis did have flashbacks to his heartbreaking loss at Delaware International as the Conococheague 50 wound down, but his Dirt Late Model kept running on four filled tires.

“You're always worried the whole time you're racing,” said Francis. “So when I looked up at the board and saw 42 laps were in, I just was thinking, ‘Let's get the last eight laps in here without getting a flat.' I just wanted the race to end.”

Francis won the Conococheague event for the second time in his career, 13 years after his initial triumph in a 1996 race sanctioned by the defunct STARS series. He also gave Beitler, whose home in West Friendship, Md., is about an hour's drive from Hagerstown, a victory at his home track for the first time in five years.

In addition, Francis moved into the WoO points lead by 24 points over Lanigan. He entered the event two points behind leader Josh Richards of Shinnston, W.Va., who struggled to a 17th-place finish (one lap down) in a brand-new Rocket car and fell all the way to fifth in the points standings.

Lanigan, who turns 39 on June 3, steered his Fusion Energy Rocket past Clanton for second on a lap-18 restart and held the position for the remainder of the distance. But he wasn't able to offer Francis a challenge.

“Francis had more traction,” said the winless Lanigan, who recorded his fourth runner-up finish of the '09 WoO campaign. “If we just would've tightened up a little bit I think we could've run with him, but our car was pretty good in the heat so we didn't change it as much as we should have.”

The 43-year-old Eckert, meanwhile, also slightly missed the optimum setup for the feature, which was run on a smooth, slick surface.

“Francis was the best car that I could see,” said Eckert, who moved into a tie with Clanton for third in the points standings. “I could just about run with Lanigan, but we needed to be a little tighter.”

Keith Jackson of Odenton, Md., scored a WoO career-best finish of sixth. Jason Covert of York Haven, Pa., marched forward from the 16th starting spot to grab seventh place, while Tim Fuller of Watertown, N.Y., rallied to finish eighth after falling from the 13th starting spot to last on the track when he nearly spun on the opening circuit and Brady Smith of Solon Springs, Wis., moved from 17th to ninth. Hagerstown regular Andy Anderson of Bunker Hill, W.Va., completed the top 10.

The race's four caution flags were all caused by single-car incidents. Vic Coffey of Caledonia, N.Y., and Kirk Ryan Jr. of Lewistown, Pa., each spun on lap two to bring out separate cautions, while J.T. Spence of Winchester, Va., stopped on lap 18 and D.J. Myers of Greencastle, Pa., pulled up lame on lap 27 after twice coming together with Brady Smith while battling for ninth place.