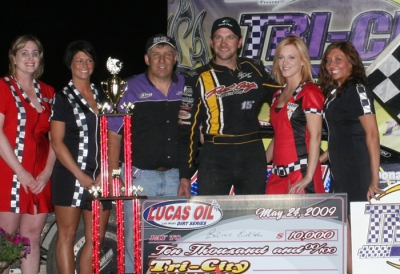 On a night with off-and-on drizzles, the sixth-starting Birkhofer led the final 36 laps of the main event to cap a lucrative Memorial Day weekend that included Saturday's $40,000 victory in the O'Reilly Show-Me 100 at West Plains (Mo.) Motor Speedway.

"We are on a roll right now, no doubt about it," said the 37-year-old Birkhofer, "but I can't get cocky or too overconfident because the next time out we may not run worth a darn. ... when you outrun two of the best that there have ever been in this sport, then you've done something."

Jacobsen and outside front-row starter Steve Casebolt of Richmond, Ind., led the field to the green flag with Jacobsen leading Casebolt and Don O'Neal of Martinsville, Ind., at the outset. Casebolt took command on the second lap, but Birkhofer was quickly in the mix from his outside third-row starting spot.

Birkhofer took second from O'Neal on the 10th lap, then used the bottom groove to catch Casebolt. After a side-by-side battle for three laps, Birkhofer took over on the 15th lap while the rest of the eventual top-five finishers were still battling back in the pack.

Eighth-starting Jimmy Mars tried to keep up with his fellow M-B Customs Chassis driver, moving past Casebolt to take second on the 19th lap. A lap-23 caution for a blown tire on the Scott James car reset the field, and Mars sustained rear damage on his car on the restart that flattened his rear tire, forcing him out on lap 25.

Birkhofer pulled away on the mid-race restart while Moyer worked his way into second. A final yellow on lap 36 bunched the field once again with Birkhofer leading Moyer and Bloomquist. The Hall of Famers couldn't keep up, though, as Birkhofer pulled away for the victory, withstanding Bloomquist's late charge in the low groove. Pearson charged up to finish third in the race's late stages.