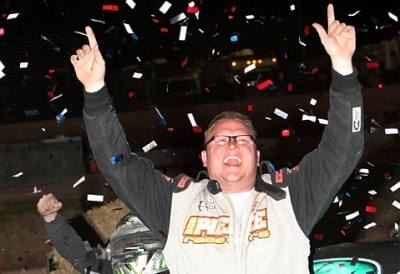 BEAVER DAM, Wis. (May 24) — Jason Feger lived up to his nickname on Sunday night at Charter Raceway Park. Tossing his car around the extreme top of the third-mile oval, the Highside Hustler led the 40-lap Tri-State Late Model Challenge A-Main from flag-to-flag to record his first career victory on the World of Outlaws Late Model Series. | WoO notebook | Slideshow

Feger, 31, of Bloomington, Ill., outgunned polesitter Matt Miller of Waterville, Ohio, for the lead at the initial green flag and never looked back. The personable UMP DIRTcar Racing star turned back some challenges from Miller and survived a lap-34 caution flag to pocket a career-best race payoff of $7,650.

“I knew the outside would be good, but I didn't know how good and for how long,” said Feger, who started second in his family-owned Bob Pierce Race Car. “I knew I had to try running it, though, so I just told the guys, ‘We're gonna hang on as long as we can hang on up there.'

“Luckily it stayed good enough up top for the whole race and the bottom wasn't quite quick enough. It all worked out in our favor.”

Miller settled for a career-high WoO finish of second in Larry Moring's MasterSbilt machine. He couldn't stay with Feger after the race's lone restart on lap 34, finishing 1.318 seconds behind. Brady Smith of Solon Springs, Wis., battled forward from the fifth starting spot to finish third, falling short of a victory in front of his home-state fans. Terry Casey of New London, Wis., placed fourth and Rick Eckert of York, Pa., completed the top five.

Feger, whose previous best WoO finish was a fourth on Sept. 13, 2008, at I-55 Raceway in Pevely, Mo., was ecstatic when he reached victory lane on the speedway's homestretch. He high-fived and hugged his crew, which is led by Feger's brother Austin (the Integra Shocks ‘Wrench of the Race' Award winner), and acknowledged a loud cheer from the crowd.

“We've been thinking about winning one of these World of Outlaws races for a long time,” said Feger, who entered Sunday's UMP DIRTcar co-sanctioned event ranked second in the organization's weekly points standings. “We love racing with the World of Outlaws and we've come close a few times, but I didn't know if (a victory) was gonna happen — especially at a track we've never seen.

“But maybe racing at this place for the first time was to our advantage. We didn't know anything about it, so in this situation all you gotta do is get out there and race. That's what we did. And after we qualified good (recording fast time), that kinda set the tone for the whole night.”

Feger's triumph — a checkered flag he called “the biggest win of my career” — came after he experienced a dismal outing in Friday night's Tri-State Late Model Challenge opener at U.S. 36 Raceway in Osborn, Mo. He suffered a broken motor at the end of his heat race, forcing him to take the green flag in another car and then drive back to his shop in central Illinois to retrieve his backup car for the remainder of the weekend's action.

Miller, who made his first WoO start of the 2009 season, never found the opportunity to overtake Feger that he hoped would materialize.

“After I couldn't slide up and get ahead of (Feger) at the start, I tried to bide my time behind him,” said Miller. “I know that he's pretty aggressive running the top — and if you attack that cushion, you can get in trouble. I wanted to be in position to take advantage of any bobble he might make, but I didn't stay close enough to him. When we got to (lapped) traffic it seemed like he'd clear a car and then I'd get hung up, and that just cost me too much ground.”

Brady Smith, meanwhile, dearly wanted to win for the dozens of family members and friends he had watching his only WoO appearance of the season in Wisconsin, but the 31-year-old struggled to advance with the outside line the preferred way around the track. He gained control of third place on lap 14, but he found himself nearly a straightaway behind Miller and didn't pull within striking distance of the second-place runner until just before Grand Forks, N.D.'s Dustin Hapka spun in turn two to bring out the lap-34 caution flag.

“We had a really good car,” said Smith, who registered his second consecutive top-five finish on the WoO. “But it was tough to pass because the top was dominant. We made some moves to go forward, but we couldn't get up there to challenge (Feger) and that was disappointing.”

Notes: Feger's Pierce Race Car is sponsored by Advanced Racing Suspensions, Campbell Construction, Mulligan's and La Bamba's. ... Defending tour champion Darrell Lanigan of Union, Ky., who switched to his backup car after his primary mount developed a minor engine problem during time trials, finished 11th. ... Vic Coffey of Caledonia, N.Y., was 10th for his first top-10 finish of the season. ... Provisional starter Russ King broke a motor and had to start in a backup car. ... The WoO tour wraps up May with three upcoming races. Delaware International Speedway hosts a $10,000-to-win event on May 28, Hagerstown (Md.) Speedway hosts a $10,000-to-win race on May 30 and Tyler County Speedway in Middlebourne, W.Va., hosts a $7,000-to-win event on May 31.