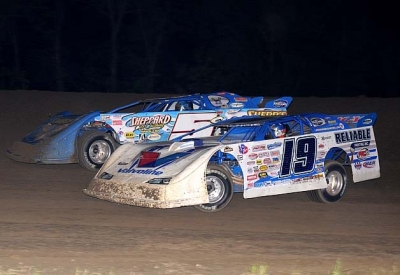 OSBORN, Mo. (May 22) — In one dramatic minute on Friday night at U.S. 36 Raceway, Steve Francis went from cursing himself for making a crucial mistake to celebrating his third World of Outlaws Late Model Series victory of the season. | Slideshow

Francis, 41, of Ashland, Ky., thought he had let the first-ever WoO event at the high-banked oval slip through his fingers when Brady Smith of Solon Springs, Wis., charged under him for the lead on lap 44 of the 50-lapper But moments later the race fell back into his lap when Smith slowed off turn two on the final lap with a flat left rear tire, handing the checkered flag to Francis.

“I'd rather be lucky than good any day,” said Francis, the only driver with multiple wins on the 2009 WoO. “We'll take ‘em any way we can get ‘em. We feel like we've given a couple away this year, so maybe we got one back by accident tonight.”

Francis pocketed $10,700 for his 23rd career WoO victory, the most of any driver on the national tour since 2004. It came in his initial start at the blazing-fast 3/8-mile oval and made him eligible for the $10,000 Tri-State Late Model Challenge bonus if he can win Saturday at 34 Raceway in West Burlington, Iowa, or Sunday at Charter Raceway Park in Beaver Dam, Wis.

Josh Richards of Shinnston, W.Va., who started from the pole position but fell to fifth in three laps due to an “extremely tight” Rocket car, emerged as the runner-up for the second consecutive WoO event. He finished 1.023 seconds behind Francis and took over the tour's points lead from defending champion Darrell Lanigan of Union, Ky., who finished 21st after retiring with engine problems while running fourth on lap 20.

Shannon Babb of Moweaqua, Ill., battled forward from the 11th starting spot to place third in his Sheltra Motorsports-Petroff Towing Rocket. Smith managed to complete the last half-lap of the race on a flat tire to salvage a fourth-place finish and Tim Fuller of Watertown, N.Y., registered his first top-five finish of the season by outdueling Chub Frank of Bear Lake, Pa., for fifth in his Gypsum Express Rocket.

The memorable finish was set up after Francis, who took the lead for the first time on lap 21 when he passed race-long pacesetter Steve Sheppard Jr. of New Berlin, Ill., made a misstep in lapped traffic. When Francis kept his Dale Beitler-owned Rocket car in the high groove rounding turns three and four as he approached the slower machine driven by Vic Coffey of Caledonia, N.Y., Smith stuck to the bottom of the track and snatched the top spot.

“I just got a little too cautious with a couple lapped cars and screwed myself up,” said Francis, who started third. “I got to easing in there instead of just blasting in there like (Smith) was and it cost me. In that type of situation, it's much better to be running second than leading.”

Smith, who turns 32 on May 31, appeared on his way to a slump-busting victory. He took the white flag with an edge of several car lengths on Francis, but that disappeared in a flash in turn two.

“I hit a hole the wrong way and the left-rear tire just came off the rim,” mourned Smith, who started sixth. “It was just a bad break.

“I guess we were fortunate to still get fourth. Considering that we've been a 10th-place car for the last few races, that's not too bad. But it's a major disappointment to lose the lead on the last lap when it looks like you're going to win the race.”

And Smith definitely felt that his first win as a WoO regular (he won twice in limited tour appearances last year) was in his grasp.

“I hate to say it, but I thought we were going to win,” said Smith, who scored his first top-five finish since he was fourth on March 13 at Deep South Speedway in Loxley, Ala. “Everybody knows, though, that it's not over till it's over. They don't write out the check on the white-flag lap.”

Three caution flags slowed the race, all after the halfway point. Jordan Bland of Campbellsville, Ky., triggered the first slowdown, on lap 32, when he stopped his car on the inside of turn three. One circuit later Dennis Erb Jr. of Carpentersville, Ill., saw his strong third-place run end when terminal engine woes caused him to stop on the track, and on lap 39 Coffey blew a right-rear tire off turn four.

Sheppard, meanwhile, made a strong bid for his first career WoO win, leading laps 1-20 off the outside pole and challenging Francis after the lap-33 restart. But he relinquished second place during the lap-39 caution period due to a motor malfunction.

Finishing in positions 6-10 was Frank, who swapped fifth several times with Fuller; Rick Eckert of York, Pa.; Shane Clanton of Locust Grove, Ga., who started fourth but lost a half-dozen spots when he slipped over the cushion between turns one and two on the first lap; Clint Smith of Senoia, Ga., who changed motors after qualifying through a heat; and Russ King of Bristolville, Ohio, who topped Brent Robinson of Smithfield, Va., in a close battle to grab the $250 Rookie of the Race bonus.

Notes: Dennis Erb Jr. of Carpentersville, Ill., lowered the track record with a 12.463 qualifying lap at a track that rarely hosts Late Models. ... The sprint car track record is under 10 seconds. ... Russ King became the first rookie to score a top-10 finish. He also earned the tour's $500 Bonus Bucks cash because he was the highest-finishing driver who hasn't won a series feature and wasn't ranked among the top 12 in series points. ... The race marked the first event of the year at U.S. 36 Raceway. ... Jason Feger had engine trouble in his No. 25 and started Rickey Frankel's No. 33 in the feature. ... Kim Horn of Gillette, Wyo., failed to get a qualifying time when she got into the wall in time trials.