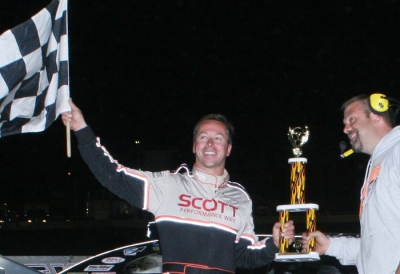 LINCOLN, Ill. (May 17) — A smooth and steady run led Rick Eckert to a slump-busting victory in Sunday night's World of Outlaws Late Model Series Land of Lincoln 40 at Lincoln Speedway. Eckert, 43, of York, Pa., shot forward from the fifth starting spot to grab the lead from Chub Frank of Bear Lake, Pa., on lap three and never looked back. | Postrace notebook | Slideshow

Racing snug to the quarter-mile track's inside groove, Eckert stayed firmly in front to pocket $7,600 for his first win on the national tour since June 21, 2008, at Autodrome Drummond in Drummondville, Quebec.

“This is great for me and the whole team,” said Eckert, whose 17th career WoO victory tied him with Scott Bloomquist of Mooresburg, Tenn., for second on the series win list since 2004. “We've run better this year, but we hadn't won a race and that can get everyone down. Everybody wants to get their picture taken (as a winner).”

Driving the Bloomquist Race Car that he debuted earlier this year, Eckert snapped a 36-race winless streak on the WoO. It was also his first series victory on American soil since July 8, 2006, at Sharon Speedway in Hartford, Ohio, where he won the last of his tour-best eight features that season.

Eckert crossed the finish line a couple car lengths ahead of Shinnston, W.Va.'s Josh Richards, who started from the pole position but lost several spots at the initial green flag. The 21-year-old Richards moved back to second on lap four and stayed there for the remainder of the distance in his Seubert Calf Ranches Rocket car.

Frank, 47, finished a close third in his Corry Rubber Rocket after his head-turning late-race charge around the outside of the track carried him from the seventh position to the brink of a dramatic come-from-behind victory. Seemingly out of contention after fading from the second starting spot to seventh, the veteran came alive following the race's lone caution flag — for debris on lap 24 — and actually threatened Richards and Eckert rounding turns three and four on the final circuit.

No one could match the moves of Eckert, who rode the inside groove to a satisfying score.

“On the pace laps I looked and saw there was moisture right down there on the bottom,” said Eckert. “I figured, well, I'll run around down there at the start. When the guys in front of me all got to charging too hard and slid out (in the early laps), I just drove right by them.”

Eckert didn't dare budge from the inside.

“I think I might have actually had a better car,” he said. “I probably could've moved out on the racetrack and carried some speed, but there was moisture right down there on the bottom and I didn't want to just give it up and let somebody drive by me.

“If they drove by on the top, I was gonna get back up there and try to make some time, but I never needed to do that. I could hear guys close to me hitting the throttle in the middle of the corner, but I just kept hitting my marks and nobody ever drove around me.”

Richards got the closest to Eckert, drawing within striking distance just before the caution flag slowed the race on lap 24. The young sensation couldn't mount a challenge after the restart.

“I feel like I overran the first part of the race and I think it might have cost me,” said Richards, who finished in the runner-up position at Lincoln for the second consecutive year. “I got up to (Eckert) at one point, but the caution just killed us. I think if the caution wouldn't have come out I could've got him around the top, but I felt like my left-rear (tire) sealed up after that.”

Frank was the show in the closing stages with his outside assault. On the last lap he slid across the track in turns three and four and pulled alongside Richards, but he couldn't maintain enough traction off turn four to beat Richards back to the finish line.

“I knew I wasn't gonna get (Richards and Eckert), but I figured I'd slide ‘em and make it look good,” said Frank, who won last year's WoO event at Lincoln. “If there would've been a cushion to get ahold of rather than that (outside) wall, maybe I could've got Josh. But I was just trying not to crash when I came off that corner.

Notes: Eckert's No. 24 is sponsored by Raye Vest Exacating and J&K Salvage. ... Sixth-finishing Steve Sheppard Jr. of New Berlin, Ill., earned the $500 WoO Bonus Bucks cash for being the highest-finishing driver who hasn't won a tour event and isn't ranked among the top 12 of the points standings. ... Steve Francis of Ashland, Ky., ran as high as fourth before slipping back to seventh at the finish. ... Dennis Erb Jr. of Carpentersville, Ill., rallied from 17th to eighth. ... The 43 entrants was the same number as 2008. ... The track drew a standing-room-only crowd. ... Earl Pearson Jr.'s 13.022-second lap lowered the track record in time trials. ... The WoO will swing back into action with a tripleheader in the Midwest over Memorial Day Weekend. The tour will visit U.S. 36 Raceway in Osborn, Mo., on May 22; 34 Raceway in West Burlington, Iowa, on May 23; and Charter Raceway Park in Beaver Dam, Wis., on May 24. Billed as the Tri-State Late Model Challenge, a $10,000 bonus has been posted by event organizers SLS Promotions for a driver who can win two of the three features.