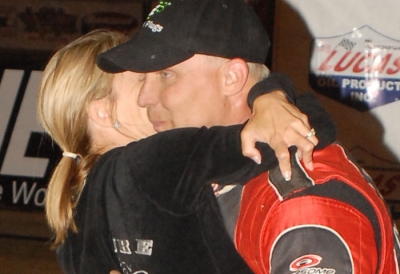 PADUCAH, Ky. (May 15) — Dale McDowell is among Dirt Late Model racing's most accomplished drivers with championships on a national tour and a World 100 victory to his credit. But the Rossville, Ga., driver admitted that even he wasn't so certain he could handle the high groove Friday night at Paducah International Raceway. | Postrace notebook | Slideshow

"I didn't know what I was doing half the time I was up there," said McDowell, who started fourth in the Lucas Oil Late Model Dirt Series event at the western Kentucky oval and battled Scott Bloomquist of Mooresburg, Tenn., in the race's late stages. "I was just stepping on the throttle and hoping it would go the right way."

The low-groove specialist indeed went the right way, racing to victory lane for his first Lucas Oil win of the season and second of his career. McDowell wrestled the lead from Bloomquist on lap 38, just after the frontrunners briefly swapped grooves — McDowell going low for a lap, and Bloomquist going high for a lap — then fought Bloomquist off in a two-lap dash to the checkered flag following a late-race caution.

McDowell, driving a car owned by NASCAR standout Clint Bowyer, was glad his No. 17m survived the wall-scraping run for the $10,000 payday.

"That's very uncommon for me. Usually I'm at the bottom of the racetrack," said McDowell, coming off a 29th-to-second run in the previous series race in Wheatland, Mo. "Our car wasn't at good riding around the bottom. I just didn't have enough traction ... so I got up on the top and it was balanced good for up there, so it worked out for us."

The ninth-starting Bloomquist, the series points leader, pulled alongside McDowell briefly on the final single-file restart, but McDowell had a two-length margin at the checkered flag. Eighth-starting Billy Moyer of Batesville, Ark., was third while Chris Wall of Holden, La., rallied from 17th to finish fourth in his PIR debut. Shannon Babb of Moweaqua, Ill., who started alongside Wall in the ninth row, was fifth.

Polesitter Ray Cook of Brasstown, N.C., led virtually all the first half of the race, building a full straightaway lead at one point, but a deflating tire knocked him out of contention on a mid-race restart. Jimmy Owens of Newport, Tenn., inherited the lead on that restart, but he pulled out with his own flat tire at a lap-25 caution.

Bloomquist took the lead when Owens pitted under caution, and for a time appeared he might cruise the second half of the 50-lapper. But McDowell took second from Moyer shortly after the mid-race restart and began flinging his car into the corners in the high groove, eventually gaining on Bloomquist every lap.

"I could get right up against the lip and if I finessed it just right, I could carry momentum off the corner," McDowell said.

The low-running Bloomquist said he glanced over his right shoulder to catch a glimpse of McDowell's charge, and on lap 33 Bloomquist shot to the high groove briefly while McDowell dove low.

"I kept seeing someone, but at first I thought it was Moyer, and we moved up high," Bloomquist said. "It didn't feel quite as good up high. The car was really strong in the bottom, you know."

So by lap 35, Bloomquist returned to the bottom and McDowell matched the move by going back to the top. Three laps later, he swept around Bloomquist to take command. McDowell built a comfortable margin in the waning laps, but the final caution gave the winner a few tense moments on the green-white-checkered flag finish.

"I was saying a lot of prayers that last couple of laps," McDowell said. "I wasn't really praying for Scott not to win, but I was praying for me to get to the finish line first."

Notes: McDowell's Warrior Race Car is sponsored by Chevrolet and Cometic Gasket. ... McDowell's previous Lucas Oil Series victory came Feb. 8, 2006, at East Bay Raceway Park in Gibsonton, Fla. ... The race was slowed by six cautions, mostly for flat tires and minor incidents. Eric Jacobsen and Jeff Walston got together on the second lap to draw a yellow, and David Breazeale spun and collected Josh McGuire for a lap-31 caution. ... Seventeen of 25 starters were running at the finish. ... Chris Wall's 17th-to-fourth run came after changing fuel pumps following qualifying, then changing radiators after his consolation race victory. ... Jason Feger of Bloomington, Ill., started third and ran in the top five much of the race before fading to eighth. ... PIR's all-time winningest driver, Terry English of Benton, Ky., started outside the front row but was out of the race after just five laps. ... Among drivers failing to make the feature: Eddie Carrier Jr. (radiator and bumper problems), Dane Dacus, Freddy Smith, Bill Frye, Eric Turner, Terry Casey and Kevin Claycomb, last year's UMP DIRTcar Summernationals winner at Paducah. ... Lucas Oil drivers get a night off Saturday with the cancellation of the May 16 event at La Salle (Ill.) Speedway. Heavy rains have hit the track in recent days. ... The series next points to West Plains (Mo.) Motor Speedway for the $40,000-to-win Show-Me 100 on May 22-23, the first time the formerly independent event has been sanctioned.