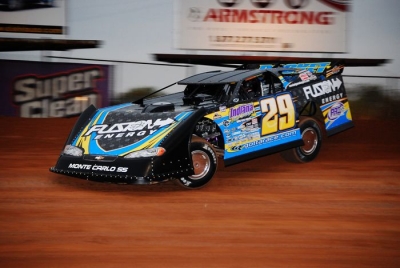 Some good will come from the disappointing weather, however. The remainder of Tuesday night's program will now serve as a Thursday night lead-in to the third annual Firecracker 100 on June 26-27 at Lernerville, adding more excitement to an action-packed weekend that culminates with the $30,000-to-win 100-lapper.

A field of 40 cars was signed in for Tuesday's show. Morning forecasts calling for dry evening weather seemed to indicate that the event would be unaffected by precipitation, but a slight chance of evening showers was added to the outlook later in the day and ultimately arrived to doom the program.

Drizzle began falling during heat-race competition and intensified as the second consolation field came to the green flag. After rain fell steadily for more than an hour and an expanding batch of drizzle across western Pennsylvania made the possibility of a rapid track surface reconditioning impossible, officials decided to reschedule the remainder of the program to June 25.

Lanigan, who earned a $50 bonus for registering his second WoO fast time award of 2009 after turning a lap of 15.272 seconds in Ohlins Shocks Time Trials, picked the pole position for the 50-lap Showdown in Sarvertown in a draw that included the top-two finishers of each heat. Frank will start from the outside pole on June 25.

Lernerville regular Alex Ferree of Saxonburg, Pa., won the first 12-lap consolation; the second consy was red-flagged before a full lap was completed.

All rainchecks and pit bands from Tuesday's event will be accepted for entry on June 25.

The series will be off this weekend before returning to action to contest a doubleheader in the Midwest on May 16 at Lawrenceburg (Ind.) Speedway and May 17 at Lincoln (Ill.) Speedway.