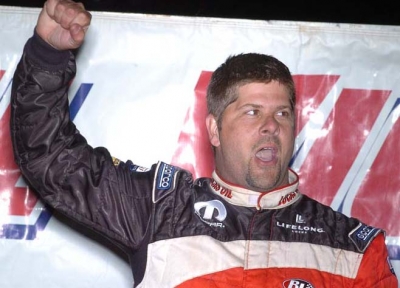 BROWNSTOWN, Ind. (March 21) — There's nothing like breaking the ice on the Midwest racing season by winning a big race. And that's exactly what Earl Pearson Jr. of Jacksonville, Fla., did, taking command of Brownstown Speedway's 12th annual Indiana Icebreaker on the 20th lap and roaring to a $10,000 victory on the Lucas Oil Late Model Dirt Series. | Free video | Slideshow

The four-time series champion won a battle royale of groove-swapping action through the early stages of the 50-lap event and held on for a victory at the quarter-mile oval in southcentral Indiana.

"That was one heck of race for the lead, I hoped the fans enjoyed that one because they got their money's worth tonight," said the 37-year-old Pearson, who started fifth. "I want to thank my crew Matt and Devine and everybody else who helped tonight, we didn't run all that well in Florida, but here tonight, the car was just awesome.

"It feels good to come here and run so well, the competition was tough and everybody gave each other racing room out there and raced as clean as you will see anywhere, I didn't know how the track would be there for the feature, but you could race anywhere on it. I want to especially thank Bobby Labonte for letting me drive his car and I know he will be extremely happy about this win."

Polesitter Dale McDowell of Rossville, Ga., slipped back a bit early before recovering to finish second while Jimmy Owens of Newport, Tenn., gained three positions in finishing third on a cool Indiana evening. Brad Neat of Dunnville, Ky., rallied from 20th to finish fourth and third-starting Scott Bloomquist of Mooresburg, Tenn., rounded out the top five.

McDowell and Ray Cook of Brasstown, N.C., started on the front row and battled early before Bloomquist made it a three-wide battle. Bloomquist forged in front of Cook to grab the lead on lap eight while Pearson inched into third during a thrilling battle among five drivers.

Cook edged back past Bloomquist for the point on the 11th lap and they swapped the lead twice more before lap 14. Behind them, Pearson was deftly using the inside lane to make three-wide for the lead with 15 laps in the record books.

Cook led four more laps before Pearson became the fourth leader on the 20th lap. Everyone got a chance to breathe on lap 23 when the race's lone caution appeared on lap 23 for Scott James, who darted into the pits for fresh rubber.

On the restart, Pearson was on the point with Bloomquist and Cook lined up side-by-side. Bloomquist challenged Pearson, but the leader stayed in control through the 30th lap as the frontrunners headed for lapped traffic. Owens made a nifty pass on Bloomquist on lap 36 to take second place and on lap 36, Owens, Bloomquist and McDowell came past the flagstand three-wide in battling for the runner-up spot.

Meanwhile, Pearson was cruising up front and maintained a cushion of lapped cars in the race's late stages. McDowell slipped past Owens with Neat completing his rally from the 10th row.