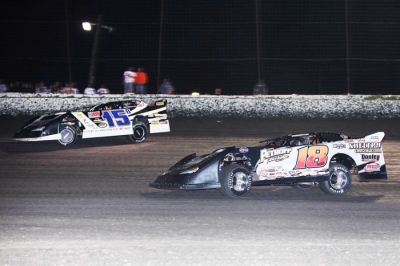 Babb, 35, of Moweaqua, Ill., celebrated his hard-fought triumph in style, donning a cowboy hat and climbing on the back of the brown-and-white steer that was brought in from a local ranch to lend a Texas-accent to the post-race ceremonies. He responded to the cheers of the 3/8-mile track’s near-capacity crowd with a wave of his hat.

“I had my doubts (about sitting on Hondo) after I gave him a kiss and he grunted back at me,” said Babb, who registered his ninth career win on the WoO. “But I’m sure if his owners had any question about it they wouldn’t have let me try to get up on him, so I climbed right on him. I’ll do anything for $20,000.”

Babb drove his heart out before meeting up with Hondo, taming the outside groove to score his first victory since starting his own team this season with the help of Sheltra Motorsports, Petroff Towing and Donley Trucking. He inherited the lead when defending WoO champion Darrell Lanigan of Union, Ky., slowed with a flat right-rear tire on lap 40 and held off repeated challenges from Brian Birkhofer of Muscatine, Iowa, en route to the checkered flag.

In an eventful race that featured six lead changes among four drivers and stretched over an hour in length thanks to nine caution flags, Babb steered his Dargie-powered Rocket car across the finish line 1.285 seconds ahead of Lanigan, who rallied from the rear of the field after pitting for a new tire on his Fusion Energy Rocket.

Birkhofer nosed in front of Babb to lead laps 56 and 71, but he couldn’t complete a pass and settled for third place in his Mars Car.

Josh Richards of Shinnston, W.Va., finished fourth in his Seubert Calf Ranches Rocket after climbing as high as second from the 15th starting spot. With Steve Francis of Ashland, Ky., who entered the Lone Star 100 as the WoO points leader, finishing 23rd after he spun off turn two on lap 17 and was clipped by several cars, Richards moved to the top of the standings after four events.

Chub Frank of Bear Lake, Pa., who started 10th, placed fifth in his Corry Rubber Rocket. It was his first top-five run of the 2009 WoO.

Babb, who started third, flashed his vintage cushion-pounding form in rolling to his first WoO triumph since July 18, 2008, at Brown County Speedway in Aberdeen, S.D. “It was kinda ugly, but we got up there and got it done,” said Babb. “The cushion came in for us and we took advantage of it.”

Babb found that the extreme outside of the high-banked track was prime real estate for him following a lap-36 incident involving polesitter Rick Eckert of York, Pa., and Vic Coffey of Caledonia, N.Y. The two WoO regulars tangled exiting turn two while battling for third place, sending Eckert against the backstretch wall and Coffey into the guardrail between turns three and four.

“At the beginning it wasn’t any good on top, so I was planning on running the bottom,” said Babb. “But it was so slimy on the bottom I couldn’t steer down there. My car would just push up in the middle in front of those guys, so I was struggling. Then, after Rick and Vic got together, I restarted on the outside and found something up there.

“I just tried to make long straightaways out of it and follow the cushion around the rest of the way.”

Birkhofer, 37, became Babb’s toughest challenger. After slipping as far back as eighth from the fourth starting spot, Birkhofer moved back to second on lap 53 and made several attempts to run the inside lane past Babb.

While Birkhofer was able to nip Babb at the flagstand for the lead twice, Babb maintained his top-side momentum and turned back the threat.

“When you’re up on that cushion, you can’t let the thing straighten out too much on you or you’ll jump the cushion,” said Babb. “Every lap’s a hairy lap when you’re up there, so I just tried to forget about (Birkhofer) down there and keep making my good laps on the top.”

Birkhofer, who lost ground after being overtaken for second by Lanigan on lap 88, recorded his second consecutive third-place finish on the WoO. He finished in the same spot on March 13 at Deep South Speedway in Loxley, Ala.

“I tried everything I could to pass him on the bottom,” Birkhofer said. “But hey, that was Shannon Babb running that cushion. I couldn’t run up there like that.”

Lanigan, meanwhile, felt the first WoO event in Texas since 2004 might have slipped through his fingers. He appeared in prime position after marching forward from the sixth starting spot to grab the lead on lap 36 from race-long pacesetter Jimmy Mars of Menomonie, Wis.

“I feel like we could’ve won that race,” said Lanigan, who never got close enough to challenge Babb over the final 12 circuits. “My car was good enough to move around, so we could’ve gotten up there and run the top like Babb. We just had a bad break (with the cut tire).”

Finishing in positions 6-10 was Tim Fuller of Watertown, N.Y., who rallied after pitting to change a broken left-rear shock on lap 51; Clint Smith of Senoia, Ga.; Shane Clanton of Locust Grove, Ga., who started 23rd after using a provisional; Ray Moore of Shreveport, La., who earned the $500 WoO ‘Bonus Bucks’ cash for being the highest-finishing driver who has never won a tour race and isn’t ranked among the top 12 in the points standings; and Brady Smith of Solon Springs, Wis., who soldiered on with a damaged car after being involved in the scramble that followed Francis’s lap-17 spin.