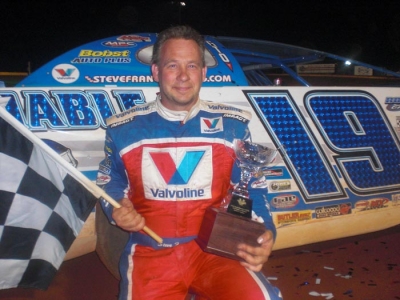 LOXLEY, Ala. (March 13) — Steve Francis is riding high on the World of Outlaws Late Model Series. And after capturing Friday's 40-lap Showdown on the Gulf opener at Deep South Speedway, the red-hot star from Ashland, Ky., has no intention of slowing down.

“I’m just gonna go out and try to win every race we can win,” said Francis, who registered his second straight WoO victory and extended his points lead three races into the tour’s grueling 48-event schedule. “For some reason, I’m relaxed right now and just enjoying going racing.”

Francis, 41, topped a battle of former WoO champions, overtaking Billy Moyer of Batesville, Ark., for the lead on lap 19 of the tour’s first-ever race at the high-banked, 4/10-mile oval. Driving a brand-new Valvoline/Reliable Painting Rocket car owned by Dale Beitler, Francis held on through two more caution flags to add $7,700 to his bank account.

The 51-year-old Moyer settled for second place, 0.671 of a second behind Francis after leading laps 1-18. He was behind the wheel of a car from the stable of Woodward, Okla.’s Tommy Weder Jr., a young dirt Late Model rookie who is campaigning Victory Circle machines built by Moyer. Brian Birkhofer of Muscatine, Iowa, who started fourth in his Mars Car, quietly ran in third place from start-to-finish. He finished nearly four seconds behind the leaders.

Francis started from the pole position, but he was outgunned for the lead at the initial green flag by fellow front-row starter Moyer. Any uneasiness he had about his chances of regaining command from Moyer quickly disappeared.

“I was (doubtful) the first three laps, and then I wasn’t,” said Francis. “I realized how married (Moyer’s) car seemed to be to that top (groove), and then I was just kinda waiting to pick a spot when we got to lapped traffic. Passing him in wide-open track was gonna be hard, but we had a good car and were able to maneuver better than he was.

“I figured just from watching where he was having to run on the racetrack that he had committed a little softer on tires than I had. I knew when we got to lapped cars that I was able to turn and come down the bank a lot better than he could.”

Francis made his move exiting turn two on the 18th circuit, ducking underneath Moyer’s green-and-black mount with slower cars ahead. He had his Cornett Chevy-powered No. 19 in front for good as lap 19 was scored.

Moyer, who accepted an offer to run Weder’s brand-new No. 02 after his own Banner Valley Hauling No. 21 was sidelined by motor trouble during Thursday night’s practice session, would have liked to call a do-over on the 18th lap.

“I feel like I gave the race away myself,” said Moyer, who earned $3,100 for his night’s work. “I hit that hole (in the surface) and kinda made the wrong decisions, and Steve ran a great race. He did what he needed to do. It wasn’t the car’s fault. It was good. I set the car up just like mine, so really it should run as good as mine.”

Francis and Moyer had a hairy moment on lap 20, when they momentarily got bottled up on the backstretch behind the slowing car driven by WoO Rookie of the Year candidate Brent Robinson of Smithfield, Va. They escaped the episode unscathed and Francis controlled the remainder of the distance.

“It feels like you’re going MACH-3 around this place,” said Francis, whose career WoO win total of 22 leads all drivers during the tour’s World Racing Group-era (2004-present). “Things happen here in a hurry, and we had a close call there.”

Four caution flags slowed the event, which was run before the biggest crowd ever to attend a dirt Late Model event at the 5-year-old track.

Cautions were caused by the turn-two spins of Winston, Ga.’s Travis Pennington (lap four) and William Thomas of Phenix City, Ala. (lap nine), and the slow machines of Watertown, N.Y.’s Tim Fuller (flat left-rear tire as he ran 10th on lap 26) and WoO Rookie of the Year contender Russell King of Bristolville, Ohio (overheating engine on lap 28).

Finishing in positions 6-10 was Chub Frank of Bear Lake, Pa.; Shane Clanton of Locust Grove, Ga.; defending WoO champion Darrell Lanigan of Union, Ky., who transferred to the feature through a heat race despite pitting to change a blown left-rear tire; Clint Smith of Senoia, Ga.; and Shannon Babb of Moweaqua, Ill.

Weder, 23, drove his team’s primary car to an 11th-place finish, earning him a $500 bonus as the highest-finishing non-series regular.

Saturday's weekend finale at the Showdown on the Gulf, scheduled to pay $12,000 to the winner, was rained out.