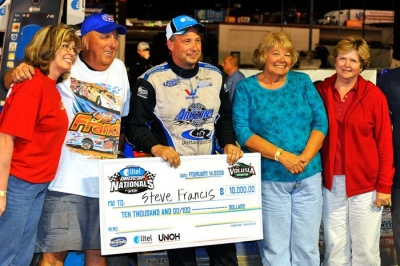 Francis is flanked by his parents in victory lane. (thesportswire.net)

BARBERVILLE, Fla. (Feb. 14) — Steve Francis saved his best for the last night of the 38th annual Alltel DIRTcar Nationals by UNOH. With a stirring drive forward from the eighth starting spot to win the 50-lap World of Outlaws Late Model Series main that ended the 12-night extravaganza at Volusia Speedway Park, Francis headed home to Ashland, Ky., with a smile on his face and $10,100 in his pocket. | Complete Volusia coverage | Slideshow

“I shouldn’t say, ‘It was about time,’ because no racetrack ever owes you anything,” said Francis, whose best finish in the week’s five other Super Late Model events was a fourth in Thursday’s WoO season opener. “But when you struggle as much as we have down here, it just makes you feel good when you leave here with a win. Now we get to be the guy who won the last race — and we get a month to think about it.”

Francis, 41, nailed the tire choice for his Dale Beitler-owned Rocket car after a post-heat race shower dampened the half-mile oval and delayed the program for one hour. He reached second with a lap-20 pass of Jacksonville, Fla.’s Earl Pearson Jr. and then chased down race-long pacesetter Brady Smith of Solon Springs, Wis., finally grabbing the top spot for good on lap 36.

Smith, who started outside the front row in his Bloomquist Race Car, settled for a runner-up finish, 1.878 seconds behind Francis. The $5,000 outing came after the hopeful 2009 WoO regular failed to qualify for the tour’s lidlifter on Thursday night because of a heat-race accident.

Rick Eckert of York, Pa., finished third in the Raye Vest Racing Bloomquist car, giving him four top-five finishes in six events at Volusia. Completing the top five was fifth-starter Kelly Boen of Henderson, Colo., who enjoyed his best Volusia finish, and Pearson, who ran as high as second after starting sixth. Both drivers were behind the wheel of Rocket cars.

Josh Richards of Shinnston, W.Va., who entered the evening’s action with back-to-back $10,000-plus victories in WoO (Thursday) and UMP (Friday) competition, saw his hot streak end with a seventh-place finish. He started 12th.

Francis credited his 21st career WoO triumph — the most of any driver on the national tour since 2004 — to his starting spot and tire choice.

“With the (heat) inverts (in UMP events) and how everything has played out, we haven’t been able to see the front of the field much this week,” said Francis, who previously won WoO races at Volusia in 2004 and 2006. “Tonight we were finally able to start closer to the front and it made a big difference. We just didn’t have to kill our car the first 20 laps to get into contention. We were able to save some tires and some car.

“We went a little soft on tires because of the showers. I was afraid that after three or four laps we’d start seeing a black line, but I just saw some spotty black spots so I knew we could just keep chasing that cushion because we had on a little softer tires. Then we were able to save enough so we could go to the bottom and pass Brady (for the lead).”

Smith, 31, mourned the pair of caution flags that slowed the race, on lap 24 (for the stopped car of Batesville, Ark.’s Wendell Wallace) and lap 25 (a homestretch spin by Chub Frank of Bear Lake, Pa.).

“After the last restart I didn’t go as good,” said Smith, who built as much as a half-straightaway lead during the race’s first half. “I got some wheelspin, so I believe my right-rear sealed over. We actually had on a harder tire than (Francis), but that tire has got a tendency to seal over.

“I think if the race would’ve went all green we might’ve been able to hold on, but you always have ifs, ands or buts. We’re just happy we had a good run here to end our Speedweeks.”

Eckert, 43, thought tires and the mid-race caution flags were his downfall. “I think Steve was a little bit softer on tires than us,” Eckert said. “I didn’t think the softer tires would’ve kept going the whole way, but those two cautions probably helped him more than us because his soft tires cooled down and it took me a while to get going after the restarts.”

Finishing in positions 6-10 was Shane Clanton of Locust Grove, Ga., who surged to fourth following the lap-25 caution flag but slipped backward because he couldn’t hold the outside groove; Richards; defending WoO champion Darrell Lanigan of Union, Ky.; 18th-starting Scott Bloomquist of Mooresburg, Tenn.; and Dale McDowell of Rossville, Ga.

Notes: Francis drives the Beitler Motorsports Rocket Chassis with a Cornett engine and sponsorship from Reliable Painting, Valvoline and Integra Shocks. ... Seventeen of 28 starters finished 50 laps. ... Twenty-two drivers were running at the finish. ... Jimmy Owens retired on lap 13 and Shannon Babb a lap later. ... Dillon Wood was out on lap 18 while Wallace and Frank retired after their mid-race cautions. ... Vic Coffey had to go to a backup car after overheating following his consolation race, so he started on the tail. ... Clint Smith and Tim Fuller took emergency provisionals provided for contracted series drivers. ... A 55-minute rain delay halted the night's action between Late Model heats and consolation races. The rain appeared ominous but track workers labored to whip the racing surface back into shape. "Thank God it quit," Rick Eckert said of the rain. ... The World of Outlaws take a break before a two-feature weekend at Deep South Speedway in Loxley, Ala., on March 13-14. The opener pays $7,000 to the winner with $12,000 going to the winner of the finale.

Taking the lead when polesitter Russ King's car went up in smoke on the 10th lap, sixth-starting Jimmy Owens led the final two circuits for a 12-lap victory. Fourth-starting Dale McDowell got the second and final transfer spot with Ivedent Lloyd Jr. missing the feature with his third-place finish. King was in control through the first 10 laps before he pulled up lame exiting turn four. Two cautions slowed the feature. Outside front-row starter Tommy Weder Jr. had a flat tire on the initial start and restarted on the tail. Mark Pettyjohn spun in turn two on an early restart to draw a caution; he was towed to the infield.

Outside front-row starter Tyler Ivey outran polesitter Scott James for a 12-lap victory. James stayed with him the first half of the race before Ivey put him away. James stayed ahead of the third-finishing Brandon Kinzer, who started fourth. Clint Smith was fourth. Scheduled polesitter David Breazeale scratched before the race.

Justin Rattliff won the 12-lapper from outside the front row while polesitter Vic Coffey got the second transfer spot. Dan Stone was a distant third. Fourth-starting Shannon Babb pulled to the outside pits on the first lap. Following the race, Coffey's car appeared to overheat before he got to the scales.

After a 55-minute rain delay, action is getting back under way about 9:20 p.m. Consolation race fields are forming in the infield. Misty rain and then harder rain hit just after the big-block modified heat races. Track workers whipped the track surface back into shape with a variety of push trucks and agricultural equipment.

Bouncing back from mechanical problems and a heat-race wreck earlier in the week, Brady Smith led all 10 laps from outside the front row. Third-starting Josh Richards outdueled polesitter Tommy Weder Jr. in the early laps to get second, while fifth-starting Scott Bloomquist got the third and final transfer spot after Weder got too high in turn four for the second time in the race. Bloomquist himself nearly got too high in turn four on the final lap, but Weder couldn't capitalize. Weder ended up fourth with Dale McDowell closing late in fifth.

Starting outside the front row, Wendell Wallace turned around his disappointing Speedweeks performances with a narrow heat race victory over fourth-starting Darrell Lanigan. Lanigan pressured Wallace throughout the second half of the race, but Wallace fought off his inside moves. Polesitter Billy Decker was a distant third and Russ King further back in fourth.

Outside front-row starter Earl Pearson Jr. built a half-straightaway lead by the second lap and cruised to an easy victory. Fourth-starting John Blankenship was second, barely holding off third-starting Darren Miller, who got the third and final transfer spot. Tyler Ivey was fourth. Polesitter Billy Moyer, whose team swapped engines earlier today, slowed on the backstretch of the fifth lap to draw a caution; he was pushed to the pits.

Rick Eckert blitzed polesitter Dennis Erb Jr. at the outset and edged away for another Speedweeks heat victory. Erb held second all the way while third-starting Jordan Bland joined them for a three-car breakaway and got the final transfer spot. David Breazeale was fourth after fighting off challenges from Scott James throughout the race. Fourth-starting John Anderson slipped high out of the groove twice in the early laps and ended up sixth.

Outside front-row starter Kelly Boen got the jump on polesitter Steve Francis and kept Francis at bay throughout the race for a 10-lap victory. Dillon Wood outdueled Justin Rattliff in the early laps to secure the third and final transfer spot. Third-starting Shannon Babb got out of shape in turn four as the green flag flew and never recovered, running fifth.

Polesitter Chris Madden cruised to an easy victory in the first 10-lap heat race while front-row Shane Clanton held on to second all the way. Third-starting Dan Schlieper got the third and final transfer spot in the uneventful prelim while Vic Coffey ran fourth. Tim Fuller slipped high exiting turn four on the fifth lap and retired shortly thereafter

The 56 entries is the lowest Late Model count of the week at Volusia and the second lowest of Georgia-Florida Speedweeks. ... With a 40 percent chance of rain, the track is implementing hurry-up mode. ... Josh Richards of Shinnston, W.Va., trying to notch his second three-race win streak during Speedweeks, was the 18th fastest qualifier and starts inside the second row in the sixth heat.