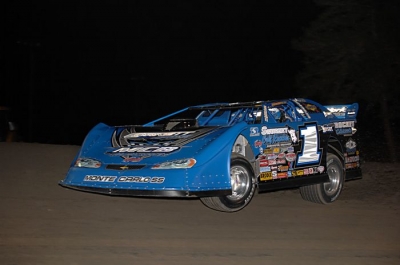 Josh Richards races to No. 2 at Volusia. (photofinishphotos.com)

BARBERVILLE, Fla. (Feb. 13) — Josh Richards is scrawling his name all over the 38th annual Alltel DIRTcar Nationals by UNOH. The 20-year-old sensation from Shinnston, W.Va., rolled to his second $10,000 victory in as many nights on Friday, capturing the mid-winter racing extravaganza’s 40-lap UMP DIRTcar finale at Volusia Speedway Park. | Complete Volusia coverage

Richards continued his February assault on dirt tracks in the Sunshine State, winning for the second time during the Alltel DIRTcar Nationals by UNOH and fifth time overall in Florida over nine days. Friday's victory was a virtual repeat of his triumph in the previous night’s World of Outlaws Late Model Series season opener.

“To win three last week and two this week is pretty unreal,” said Richards, who had a stretch of three straight Lucas Oil Late Model Dirt Series victories Feb. 5-6 at East Bay Raceway Park near Tampa. “It’s starting to sink in a little bit, but I still don’t even know what to say.

“We did everything exactly the same (as Thursday night) — qualified the same, ran the heat race the same, ran the same tires in the feature. The track was just a little bit wetter tonight so you had to be down against the brown in (turns) three and four, but everything worked out great again.”

Richards, who started fifth in Friday’s main event, moved steadily forward in his Mark Richards Racing Enterprises Rocket car to grab the lead from outside front-row starter Moyer on lap 13. He was never seriously challenged for the remainder of the event, which was slowed by a single caution flag, on lap 31 for a turn-four spin by Dan Schlieper of Sullivan, Wis.

Rick Eckert of York, Pa., slipped by Shane Clanton of Locust Grove, Ga., for second place following the lap-31 restart and finished there in his Raye Vest Racing Bloomquist Chassis car. He crossed the finish line 1.939 seconds behind Richards.

Defending WoO champion Darrell Lanigan of Union, Ky., who started eighth, advanced two spots after the restart to claim third in his Rocket mount. Ninth-starter Scott James of Greendale, Ind., got his Scott Riggs-owned Rocket car hooked up on the outside of the half-mile oval over the final nine circuits to vault from eighth to a fourth-place finish, while Clanton, who started from the pole position, faded to fifth at the checkered flag in his RSD Enterprises Rocket machine.

Four of the top five finishers were regulars on the World of Outlaws, which ends the 38th annual Alltel DIRTcar Nationals by UNOH on Saturday night (Feb. 14) with a 50-lap event paying $10,000 to win. James was the only driver who doesn’t follow the national tour.

Eckert, 43, registered his best finish of the Alltel DIRTcar Nationals, improving upon the third-place run he enjoyed on Wednesday night. He hasn’t finished outside the top 10 in the week’s five events but is still searching for the extra speed to reach victory lane.

“We just lack a little bit,” said Eckert. “I can’t get quite as aggressive getting into the corners as Josh can. Exiting the corner I might be a little bit better, but I can’t hustle in there like he can.”

Eckert paused, and then quipped with a smile, “I think we’re gaining on it and getting better every night, but it’s looking like we might run out of nights.”

Moyer, who won three times during last year’s Alltel DIRTcar Nationals by UNOH, pulled out of the event during the lap-31 caution flag while running third due to a broken lifter in his engine.

Notes: Richards drives the Rocket Chassis house car with a Cornett powerplant and sponsorship from Seubert Calf Ranches, Ace Metal Works, and MCB Motorsports. ... The winner didn't drive his own car back to the pits, so his father Mark, co-founder of Rocket Chassis, enlisted the help of Darrell Lanigan. Mark Richards drove Lanigan's car to the pits while Lanigan climbed in the winning machine. "I can't fit in that one," Mark Richards said. "He's got that containment seat and I can't get in it." ... Scott James, driving for Illinois-based Riggs Motorsports, posted a fourth-place finish for his second best Speedweeks finish. ... Dennis Erb Jr., who started third, ran in the top five through the first 25 laps but faded to finish 13th. ... Some drivers, including Richards, anticipated a 50-lap race and were surprised when the white flag appeared on lap 39. The previous night's $10,000-to-win race was 50 laps.

Polesitter Eddie Carrier Jr. and third-starting Boom Briggs made it a two-car breakaway in racing to the final two transfer spots of Friday's feature. Carrier and Briggs swapped the top spots several times late in the race with Carrier finally putting Briggs away late. Fourth-starting Brent Robinson was a straightaway behind in third with front-row starter Dustin Hapka and Austing Hubbard further back.

David Breazeale started outside the front row and was in control midway through the race, but Jimmy Owens and then Shannon Babb slipped past on the 11th and 12th laps to drop Breazeale out of a transfer spot. Tyler Ivey finished fourth.

Steve Francis started outside the front row and immediately pulled to a comfortable lead en route to his 12-lap victory. The battle for second was tight throughout the race with fourth-starting Justin Rattliff slipping underneath polesitter Shanon Buckingham on the seventh lap to grab the second and final transfer spot. Buckingham faded the rest of the way to finish third while Dillon Wood took fourth from Kelly Boen late in the race.

Outside front-row starter Shane Clanton led from the outset and cruised to victory with fourth-starting Darren Miller finishing third. Polesitter Jason McBride broke away from the rest of the pack to get the third and final transfer spot, his first feature start during 14 Georgia-Florida Speedweeks events. Dustin Hapka finished a distant fourth.

Third-starting Dan Schlieper overtook front-row starters Eddie Carrier Jr. and Dan Stone on the first lap and held on for a 10-lap victory. Fourth-starting Scott Bloomquist got up to second by the fifth lap and took a last-lap stab at Schlieper, but it fell short. Stone and Carrier swapped the third spot midway through the race with Stone getting the final transfer spot. Boom Briggs was fifth after overtaking Austin Hubbard in the final laps.

Thursday's winner starter outside the front row and cruised to a 10-lap victory. Chris Madden also pulled far ahead of the pack in finishing second while polesitter Tommy Weder Jr. was third as the field stretched out. David Breazeale was fourth and third-starting Davey Johnson was fifth. Sixth-starting Tim Fuller was shuffled back on the first lap and ended up ninth.

Rick Eckert cut down a comfortable lead by polesitter Scott James over the final two laps, slipping ahead at the finish for a 10-lap victory. James, who led most of the way, was second with outside front-row starter Billy Decker further back in third. Shannon Babb was a distant fourth. A lap-two caution appeared when Tyler Reddick and Mark Pettyjohn were involved in a scramble in turns one and two; Reddick retired.

Fourth-starting Billy Moyer slide past race-long leader Darrell Lanigan on the seventh lap and edged away to victory. Lanigan finished a half-straightaway back in second while there was a wild last-lap battle for the third spot. Steve Francis dove under polesitter Earl Pearson Jr. in turn three, but when Francis slid into the high groove in turn four, Pearson dove back under and won a drag race to the checkered flag. Justin Rattliff finished just behind in fifth in the caution-free event.

Outside front-row starter Dennis Erb Jr. slipped by polesitter Brady Smith on the third lap and cruised to a victory. Erb managed to overcome a wheel packed with mud that caused vibration problems in grabbing the checkered flag. Smith finished more than a half-straightaway behind in second while John Blankenship ran third. Dillon Wood, the group's fast qualifier, was fifth.

Clint Smith's No. 44 flamed up during his second qualifying lap and he rolled to the infield through the turn-four infield entrance. He didn't appear to be injured. ... Vic Coffey stopped in turn four, passing on his second qualifying lap. ... Ivedent Lloyd Jr. scratched from time trials. ... Darrell Lanigan leads the week-long Volusia points (combined between UMP and World of Outlaws events) with 329 points over Rick Eckert (290), Josh Richards (285) Jimmy Owens (284) and Steve Francis (279). ... Among Friday's newcomers at Volusia were Shanon Buckingham of Morristown, Tenn., Win Ingersoll of Fort Pierce, Fla. and Greg Kendall of Paoli, Ind., driving a Chad Stapleton-owned car. ... Big-block modifieds are also in action with the UMP Late Models.