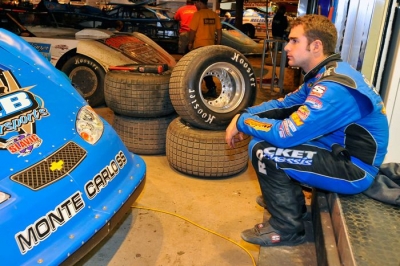 Though the 20-year-old sensation from Shinnston, W.Va., initially had some doubts about extending his unprecedented streak, he turned up the wick on his Rocket car to take the lead from Shannon Babb of Moweaqua, Ill., on lap 14 and march to a triumph worth $10,600.

“I ran the first couple laps and didn’t know if we could pull off three in a row off,” said Richards, who started third after winning his heat race despite suffering some electrical problems with his car’s motor. “I fell back to fourth, but then the car just came on. Winning the opener three years in a row — it’s just crazy. It’s a great feeling.”

With the race slowed by only a single caution flag on lap five, Richards dominated the uninterrupted action once he sailed by Babb’s Sheltra Construction Rocket for the lead. He built an edge of more than a full straightaway before late-race lapped traffic helped shrink his final victory margin to 2.013 seconds over defending WoO champion Darrell Lanigan of Union, Ky., who cut a half-straightaway off Richards’s advantage after overtaking Babb for second on lap 41.

Babb, who started from the outside pole in his new ride for ’09, settled for third place after leading laps 1-13. Steve Francis of Ashland,Ky., drove Dale Beitler’s Rocket forward from the ninth starting spot to place fourth and polesitter Dan Schlieper of Sullivan, Wis., who won the previous night’s UMP DIRTcar Late Model feature, finished fifth in his Wild Chassis.

Richards, who in 2008 finished a career-high second in the WoO points standings and tied Francis as the tour’s winningest driver, struggled the first three nights of the Alltel DIRTcar Nationals by UNOH, finishing no better than seventh in UMP competition. But a change for Thursday’s program to a car he drove to three WoO victories last season got him back to his old self at the sweeping, half-mile oval.

“We just hit everything right tonight,” said Richards, who registered his 13th career win on the WoO. “When this track is like this, I love every second out there. It just fits my driving style. You can get in the black, and you can get in the traction. You don’t have to worry about being on the cushion the whole race.”

Lanigan, 38, recorded his third runner-up finish in four starts during the Alltel DIRTcar Nationals by UNOH. He ran out of time in his advance from the seventh starting spot with his Fusion Energy Rocket car. “We had a good enough car to win, but starting behind so many good cars makes it tough,” said Lanigan. “It’s just hard to get past them all. It’s frustrating (to fall short again), but we’ve been running good, so the wins will come.”

The 35-year-old Babb, meanwhile, was satisfied with a third-place run that shook him out of some “new car blues.” An engine change earlier in the day got him back on track, albeit not good enough to hold off the top two drivers in last year’s WoO points standings.

“Josh had a real good driving car and so did Darrell,” said Babb. “I had a fast car, but I just got tighter as the race went on. We gotta get it a little freer.”

Finishing in positions 6-10 was Billy Moyer of Batesville, Ark.; Shane Clanton of Locust Grove, Ga., who ran as high as third early in the distance; fifth-starter Tim Fuller of Watertown, N.Y.; Chub Frank of Bear Lake, Pa., who slipped into the top 10 late in the race; and Rick Eckert of York, Pa., who rallied back from a left-rear tire change after tangling in turn four with Vic Coffey of Caledonia, N.Y., in the event’s only caution-causing incident, on lap five.

Scott Bloomquist started outside the front row and led all the way for a 12-lap victory. Eddie Carrier Jr.'s second-lap slide job on Jordan Bland looked liked it'd be enough to get the final transfer spot, but Bland tracked down Carrier and regained the spot on the final lap. Carrier was third while Russ King was a distant fourth. Mark Pettyjohn spun on the third lap to draw the race's only caution.

Polesitter Rick Eckert led all 12 laps for a victory over Chris Madden, who started third and held the runner-up spot the entire distance. The top two transferred to the feature. Earl Pearson Jr. was a close third. John Anderson started outside the front row but dropped deep in the field before pulling off the track.

Polesitter Tyler Ivey cruised to a 12-lap victory in the first consolation, never challenged by runner-up Vic Coffey, the other driver transferring to the feature. The 20-year-old Ivey qualified for his first career WoO main event. Fifth-starting Scott James dropped out late with a flat tire.

Shannon Babb rolled into the lead from outside the front row, then rolled the rest of the way for his first Georgia-Florida Speedweeks heat victory of '09. Polesitter Ivedent Lloyd Jr. finished second while there was a tight battle for third. Scott Bloomquist held third most of the way, but Justin Rattliff slipped past just before a late-race caution and held him off at the finish. Bloomquist was fourth and Eddie Carrier Jr. fifth. Tommy Kerr stopped on the backstretch with a smoking car to draw a lap-nine yellow flag.

Polesitter Josh Richards jumped out to a comfortable lead and cruised to victory, beating Chub Frank to the finish by a full straightaway. After the race, Richards said motor problems plagued him and the team might have to make an engine swap. Finishing third in his first WoO start was 14-year-old Tyler Reddick, who started outside the front row and got the transfer spot for his best performance at Georgia-Florida Speedweeks. Jordan Bland was fourth and Mark Pettyjohn fifth. WoO rookie contenders Russ King, Dustin Hapka and Chas Shellenberger were never factors. The race's lone caution appeared on the second lap when Ronnie Rihn stopped on the backstretch near the track exit.

Wednesday's UMP feature winner Dan Schlieper dominated from the pole position, taking the checkered flag a straightaway ahead of a wild pack that developed on the final lap. Surprising rookie Tommy Weder Jr. held second throughout the race, but sixth-starting Jimmy Owens made an inside charge on the final lap to take third from John Anderson and then nip Weder at the stripe for second. Weder got the final transfer spot with Anderson fourth. Earl Perason Jr. battled for third early before dropping back. He rallied late but settled for fifth.

Polesitter Billy Moyer outran Steve Francis on the first lap and pulled away for an easy victory. Francis held second all the way but the third spot was up in the air much of the race. Third-starting Darren Miller eventually edged away from fifth-starting Rick Eckert to get the third and final transfer spot while Chris Madden, who started sixth and ran as high as fourth, was a distant fifth. Two cautions appeared. Brent Robinson and Michael Walker got together in turn four on the first lap, forcing a restart; a lap-three caution appeared when Walker spun in turn four.

Shane Clanton made it two-for-two for outside front-row starters, easing away for an easy victory in the second heat. Polesitter Billy Decker finished second in the 10-lapper and was never challenged as the frontrunners stretched their comfortable margins throughout the race. Thrid-starting Kelly Boen held the third spot the whole race, finishing just ahead of sixth-starting Vic Coffey in the caution-free affair. Dillon Wood started outside the second row and finished fifth.

Tim Fuller jumped into the lead from outside the front row and led all 10 laps to outrun polesitter Darrell Lanigan, the night's fast qualifier. The top two broke away from the pack while sixth-starting Dale McDowell got the third and final transfer spot, fighting off a few challenges from third-starting Tyler Ivey. Fourth-starting Brady Smith was knocked out before completing a lap as he got into the frontstretch wall while battling McDowell out of turn four.

Reigning World of Outlaws Late Model Series champion Darrell Lanigan of Union, Ky., got the 2009 season off to a good start by topping 61 qualifiers in the series opener at Volusia Speedway Park. Lanigan tripped the clock at 15.946 seconds (112.118 mph) and will start on the pole of the first heat Thursday at the 38th Alltel DIRTcar Nationals by UNOH. The rest of the top six qualifiers who will start on the pole of heat races: Billy Decker of Unadilla, N.Y. (15.959); Billy Moyer of Batesville, Ark. (15.975); Dan Schlieper of Sullivan, Wis. (16.037); Josh Richards of Shinnston, W.Va. (16.046); and Ivedent Lloyd Jr. of Ocala, Fla.

Big-block modifieds are also on the card at Volusia, running three heat races, a consolation race and main event. ... Chris Madden of Gray Court, S.C., who broke a bone on the lower part of his hand in a Jan. 31 accident at Golden Isles Speedway in Brunswick, Ga. Madden won the Jan. 29 O'Reilly Southern All Star event at Golden Isles. ... Dale McDowell is piloting teammate Clint Bowyer's No. 33 Rocket Chassis. ... Volusia hosts two more $10,000-to-win Late Model events, a UMP race on Friday and another World of Outlaws event Saturday.