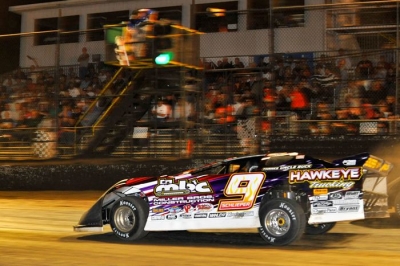 Schlieper lost the lead to Lanigan on lap 25, but he regained command moments later and repelled the challenges of the defending World of Outlaws Late Model Series champion over the remaining distance. The standout racer pocketed $7,000 after beating Lanigan to the finish line by 0.434 of a second.

“It was definitely a nail-biter,” Schlieper said of the intense event, which was slowed by just a single caution flag on lap 15. “Darrell got inside of me (to take the lead by inches on lap 25) when I started losing big grip off the high side, but then I cut back underneath him (off turn two) and decided to commit to the bottom for the rest of the race. Basically, I guess I took his line away.”

Schlieper, who started fourth, grabbed the top spot for the first time on lap 15 when he overtook race-long pacesetter Eddie Carrier Jr. of Salt Rock, W.Va. The harder UMP DIRTcar Hoosier tires that he bolted on his Wild Chassis mount helped him stay in front for all but one of the remaining circuits.

“I’m definitely excited to finally get a win here,” said Schlieper, who became the third Super Late Model driver eligible for the $10,000 prize that goes to the winner of the Alltel All-Star contest at www.alltelallstar.com. “I’ve finished second here. I’ve had a fast time here. We’ve been coming here a long time and it finally paid off with a win.”

Lanigan, 38, settled for his second runner-up finish in three features at Volusia. “I got ahead of him, but then I pushed out and he got back under me,” said Lanigan, who started ninth in his Fusion Energy Rocket car. “Then he got down and took my groove away. He did what he had to do.”

Rick Eckert of York, Pa., finished third after starting in the same position. After his apparent pass of Carrier for second on lap 15 was negated by a caution flag for the stopped car driven by Tommy Kerr of Maryville, Tenn., Eckert snared the spot from Carrier again two laps later but proceeded to lose it to Lanigan on lap 20.

“I didn’t need that caution,” said Eckert, who improved from his previous Volusia finishes of seventh (Monday) and fifth (Tuesday) behind the wheel of the Raye Vest Racing Bloomquist Race Car. “I was a little softer on tire (choice) and I just didn’t seem to be as good after the caution.”

Tuesday's winner Earl Pearson Jr. of Jacksonville, Fla., advanced from the eighth starting spot to place fourth and Billy Moyer of Batesville, Ark., started and finished fifth. Carrier slipped to sixth at the finish after leading laps 1-14 from outside the front row. He was hampered during the race’s second half by handling problems resulting from minor front-end damage his car sustained while he battled for position with Eckert.

Polesitter Vic Coffey, swinging to the outside in turn four to make a lap-seven pass, won a race-long duel with fellow front-row starter Josh Richards to win the last consolation. Richards finished second in the 12-lapper while third-finishing Ivedent Lloyd Jr. couldn't catch the frontrunners and missed transferring to the feature. Shannon Babb was fourth. Richards got under an out-of-shape Vic Coffey in turn four on the first lap but never could shake Coffey as they swapped grooves looking for the fast line.

Darren Miller's 11th-lap slide job in turn four deposed race-long leader Tommy Kerr, who started on the pole and held on for the second transfer spot. Fifth-starting Shane Clanton was hung up in fourth the first half of the race, but he moved up to challenge Miller and then Kerr before settling for third. Polesitter Jordan Bland was fourth and eighth-starting Dale McDowell fifth.

Austin Hubbard started outside the front row and led until polesitter Jimmy Owens slipped under him in turn four heading for the checkered flag. Hubbard got the second and final transfer spot but had to be pushed to the scales. Fifth-starting Russ King, charged with jumping a restart and then jumping the next start without penalty, ran as high as second before finishing third; he was apparently penalized and dropped to fifth. Wendell Wallace was running fourth when he slipped high in turn four and stopped to draw a lap-three caution.

Eddie Carrier Jr., looking strong after an engine swap last night, made an outside pass of Frank Heckenast Jr. on the sixth lap exiting turn four and led the rest of the 10-lapper. Heckenast, who inherited the lead on the second lap when polesitter Davey Johnson jumped the turn-three cushion, finished second with outside front-row starter John Blankenship third. Josh Richards, the fast qualifier in the group who started fourth, challenged for a transfer spot but didn't recover from jumping the cushion between turns one and two midway through the race. Johnson, who led the first lap, pulled to the infield and crew members found a broken lower shock mount on the left-front corner of the Tracy Seymour-owned No. 17.

Running his best race of Georgia-Florida Speedweeks, Mark Pettyjohn started outside the front row and led all the way, staying ahead of a trio of New York big-block modified drivers behind him. Pettyjohn nearly jumped the turn-four cushion on the fourth lap but held on, stretching his lead the second half of the race. Tim Fuller finished second with Billy Drake getting the third and final transfer spot over polesitter Vic Coffey. A first-lap scramble spoiled the first start attempt. Kelly Boen's car climbed David Breazeale's car and they slid to a stop in turn three, triggering a scramble that included Peter Mantha and Tommy Weder Jr. No one was injured. The right side of Boen's car sat atop the driver's side of Breazeale's car at the conclusion of the accident.

Third-starting Billy Moyer went past polesitter Jordan Bland on the backstretch of the fourth lap and raced to a 10-lap victory. John Anderson dropped Bland to third on the sixth lap, and Bland slipped back to fourth behind Dennis Erb Jr. with a lap and a half remaining. Jason Fitzgerald, who started outside the front row and lost ground on the first lap, was fifth.

Fifth-starting Dan Schlieper got to second early then grabbed the lead from polesitter Tommy Kerr on the fifth lap. Schlieper edged away the rest of the way while Darrell Lanigan, who twice swapped the third spot with Scott Bloomquist in the early laps, and then Bloomquist dropped Kerr out of the top three in the final laps. Monday's feature winner Darren Miller finished fifth. Brady Smith, whose car went up in smoke in hot laps, scratched.

Outside front-row starter Rick Eckert grabbed the early lead and went the distance for the victory, fighting off a few early challenges from Scott James. Eckert got some breathing room midway when James (exiting turn two) and Earl Pearson Jr. (turn three) slid high out of the fastest groove. Eckert won with Pearson getting past James into turn three on the eighth lap. James got the third and final transfer spot. Polesitter Chad Mahder ran fourth most of the way before losing the spot to Austin Hubbard in the closing laps. Jason McBride slid high exiting turn four midway through the race to draw the race's only caution.

Chub Frank jumped into the lead from outside the front row and captured the first 10-lapper. Frank stretched his lead to more than a half-straightaway through the first half of the race while polesitter Justin Rattliff held on to second, just ahead of Steve Francis. Jimmy Owens, the fastest qualifier in the group, slipped up in turn two on the first lap and ran fourth virtually the whole race. The race's lone caution appeared on the eighth lap when Gregg Hill stopped in turn three

Josh Richards of Shinnston, W.Va., was the fast qualifier among 69 cars Wednesday at Volusia Speedway Park for the third Late Model event of the 38th Alltel DIRTcar Nationals by UNOH. Richards had the fastest time on the D-shaped oval for the second night in a row before the night's $7,000-to-win main event.

Jon Henry slid out the entrance-exit outside turn four during hot laps-qualifying, causing damage to the car's left rear. ... Russ Adams pulled off during his qualifying session. ... Brady Smith pulled into the infield after having trouble in turn one with smoke and a few flames coming off the engine. ... While groups of six cars qualified at a time, Dennis Erb Jr. qualified alone because his car had transponder problems in his time trial session. ... Among Volusia newcomers for Wednesday are Tim Lance of Brimfield, Ill., A.J. Kirkpatrick of Castroville, Calif., and Chas Shellenberger of Winfield, Pa., who is making his first career Georgia-Florida Speedweeks appearance. ... Josh Richards of Shinnston, W.Va., a three-time winner at East Bay Raceway Park near Tampa, is the only multiple winner during Georgia-Florida Speedweeks. ... Darren Miller of Milledgeville, Ill., and Earl Pearson Jr., of Jacksonville, Fla., captured Monday and Tuesday's 30-lappers. Three $10,000-to-win events wrap up the week with UMP sanctioning Friday's race and the World of Outlaws Late Model Series sanctioning Thursday and Saturday events.