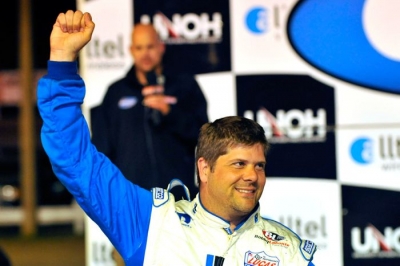 “A lot of people have come by and talked to me about it, but I don’t really remember the wreck,” said Pearson, who was transported to the hospital after crashing during a World of Outlaws Late Model Series heat race on Feb. 16, 2008, at Volusia. “That’s a plus. I know I had a bad wreck last year, but I just try to forget it and let it go.

“To be able to come back here and win after all that, though, definitely makes you feel better.”

Pearson, 37, of Jacksonville, Fla., overtook Brady Smith of Solon Springs, Wis., for the lead on lap 12 and never looked back. He drove away to triumph by 2.667 seconds over Jimmy Owens of Newport, Tenn., who slipped by Locust Grove, Ga.’s Shane Clanton for second on lap 24 but ran out of time to catch Pearson.

Clanton settled for third place after starting from the outside pole. Smith, a 2009 WoO LMS Rookie of the Year applicant who roared off the pole to lead laps 1-11, slipped to fourth at the finish and ninth-starter Rick Eckert of York, Pa., placed fifth.

Pearson mastered the inside groove while steering his Bobby Labonte Motorsports Rocket car forward from the seventh starting spot. After spending eight laps dueling for second with Clanton following a lap-three caution flag, Pearson slid by Smith for the lead and dominated the remainder of the distance.

“I went a little softer on tire and it definitely made us better down around the bottom,” said Pearson, whose triumph made him the second Super Late Model driver eligible for the $10,000 Alltel All-Star voting contest at www.alltelallstar.com. “We couldn’t get up in the black and do anything.”

The $7,000 victory was the fifth of Pearson’s career at Volusia. He previously captured UMP DIRTcar-sanctioned events during the Alltel DIRTcar Nationals by UNOH in 2003 and 2006.

Owens, who turned 37 on Feb. 3, charged forward from the 11th starting spot to finish second in his Bloomquist Chassis mount.

“I thought I had the lead when I passed Clanton,” said Owens, who was nearly five seconds behind Pearson when he reached the runner-up spot. “Then I looked up at the scoreboard and the 44 (Pearson) was in the lead, and I was like, ‘Shoot, shoot! I would’ve liked to see a caution come out, but it didn’t happen.”

The 33-year-old Clanton, meanwhile, gave Pearson his toughest battle but couldn’t stop the Sunshine State star. “It’s hard to run the bottom here,” said Clanton, “but Earl’s one of the best at running the bottom everywhere we go and he showed it tonight. He had a good race car running way down there.”

The race’s only caution flag flew on lap three for Eric Jacobsen of Sea Cliff Beach, Calif., who slowed on the homestretch with a flat right-rear tire.

Tim Fuller and Darrell Lanigan broke away from the field and secured the two transfer spots in the third consolation. Polesitter Shannon Babb was lingering in third but couldn't track down the top two cars. Scott James was fourth and Duke Whiseant fifth. Clint Smith dropped off the pack and into the pits midway through the 12-lapper.

Surviving a slick, rewatered racetrack in the early laps, polesitter Tommy Weder Jr. led the final five laps to take his first checkered flag in a Late Model. Davey Johnson held the second spot late but Greg Johnson made his way past in the final laps to get the second and final transfer spot. Johnson ended up third with Jason McBride and Vic Hill, driving a Johnson backup car, in fifth. Third-starting Frank Heckenast Jr. led the first eight laps but his No. 99jr pulled up lame in turn four, ending his race. The second caution appeared when Jon Henry spun in turn four on the 10th lap.

Polesitter Kelly Boen continued a successful Georgia-Florida Speedweeks, racing to a 10-lap victory over third-starting Billy Moyer. Fourth-starting Steve Francis finished third as the top three edged away from the pack, including fourth-finishing Tim Fuller. Darrell Lanigan's, Monday's runner-up finisher, never contested for a transfer spot and ended up fifth in the caution-free affair. After the race, Boen apologized for making contact with fellow front-row starter Fuller at the beginning of the race.

Bloomquist Race Car drivers Brady Smith, the polesitter, and Jimmy Owens, who started third, ran one-two virtually all race long to get the top two transfer spot. The last transfer spot was a battle between Shannon Babb, Clint Bowyer's former driver, and Dale McDowell, Bowyer's new driver. Babb held third most of the way but when he came upon traffic in turn three on the eighth lap, McDowell made his move and grabbed the position before they reached the white flag. Babb settled for fourth. Bowyer, who started outside the front row, was shuffled back on the backstretch of the first lap and ended up sixth.

Outside front-row starter Tyler Ivey repelled early challenges, then one more on the last lap, from third-starting Dan Schlieper while racing to a 10-lap victory. Schlieper was second as the top two broke far away from the field. Polesitter Eric Jacobsen held on to finish third while eighth-starting Chub Frank came up to finish fourth. Gregg Hill spun on the frontstretch to spoil the initial start.

John Anderson started outside the front row and raced to victory, staying well ahead some tight action behind him. Polesitter Dennis Erb Jr. and third-starting Rick Eckert battled for the second spot early with Erb edging away midway through the race before Eckert fought back. Eckert took the second spot with two laps remaining while Dan Stone followed suit on the next lap, dropping Erb to fourth. Erb barely held off Scott Bloomquist, who tried to slip under Erb in turn three. Monday's feature winner Darren Miller never contested for a transfer spot. Tommy Kerr spun in turn three to draw a lap-three caution. Rusty Schlenk, driving the Chuck Hummer-owned car, damaged the No. 25 and pulled to the infield during the yellow flag.

Third-starting Shane Clanton slid into the lead in turn three on the first lap and pulled away to win by more than a half-straightaway. The battle for second was a tight one in the closing laps, with Jordan Bland narrowly turning back Blankenship. Eddie Carrier Jr. was fourth after a close battle with Greg Johnson late. Wendell Wallace, last night's fourth-place finisher, pulled off midway through the race.

Fast qualifier Josh Richards quickly raced from fourth to first in the opening laps and cruised to a 10-lap victory. Outside front-row starter Earl Pearson Jr. was second with Ivedent Lloyd Jr. getting the third and final transfer spot. Polesitter Brandon Kinzer faded to finish sixth. The race's lone caution appeared on the seventh lap when Adam Ferri spun in turn two.

Josh Richards of Shinnston, W.Va., the only driver under the 16-second mark, topped 70 qualifiers Tuesday at Volusia Speedway Park for the second Late Model event of the 38th Alltel DIRTcar Nationals. Richards posted a lap of 15.932 seconds at the D-shaped, half-mile oval near Daytona Beach. Tuesday's UMP DIRTcar 30-lap feature pays $7,000 to the winner.

The 70 entrants were split into six groups for time trials. Among other drivers topping their groups in qualifying: John Blankenship of Williamson, W.Va. (16.281 seconds); Monday's feature winner Darren Miller of Milledgeville, Ill. (16.088); Shannon Babb of Moweaqua, Ill. (16.316); and Steve Francis of Ashland, Ky. (16.161). Billy Decker of Unadilla, N.Y., was fastest in the fourth group but his 16.227-second lap was disallowed when he failed to meet the 2,300-pound minimum at the scales.

With UMP employing four-car inversions for heat race lineups, among the fourth-fastest drivers in each group are scheduled to start on the pole of the prelims: Brandon Kinzer of Allen, Ky.; Jordan Bland of Campbellsville, Ky.; Dennis Erb Jr. of Carpentersville, Ill.; Brady Smith of Solon Springs, Wis.; and Kelly Boen of Henderson, Colo.

Several new drivers are registered for Tuesday's action, including Jacobsen, Adam Ferri of Port Colborne, Ontario; Austin Hubbard of Seaford, Del.; Russ Adams of Princeton, Ill.; and Boen. ... Rusty Schlenk of Jackson, Mich., is another newcomer and he plans to drive the No. 25 driven Monday by fellow Michigan driver Chuck Hummer. ... Vic Hill of Mosheim, Tenn., is driving a backup car to Davey Johnson for the Tracy Seymour-owned team. ... For the final four nights of Late Model action, UMP and sister organization World of Outlaws alternate nights. UMP runs a $5,000-to-win feature Wednesday and $10,000-to-win feature Friday while WoO holds $10,000-to-win events on Thursday and Saturday.