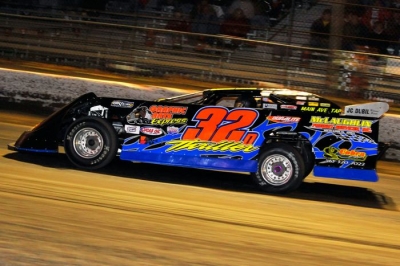 Starting on the pole of the 30-lap UMP DIRTcar feature, Darren Miller led all the way at Monday's opener for a $7,000 victory at the D-shaped track. The Milledgeville, Ill., driver got a little heat from Darrell Lanigan midway through the race as the leaders stacked up behind a few slower cars, but Miller turned up the wick on the 20th lap and stretched away to a half-straightaway margin at the conclusion of the caution-free main event.

"It was a good one for us. We need it, that's for sure," said Miller, whose best previous Speedweeks finish was 12th on Jan. 30 at Golden Isles. "Team morale's been pretty low the past couple of weeks. Maybe we'll just start the season here and forget about the rest of it."

The third-starting Lanigan, of Union, Ky., was second with fourth-starting Scott Bloomquist of Mooresburg, Tenn., in third. Outside front-row starter Wendell Wallace of Batesville, Ark., was fourth and the night's fast qualifier, Steve Francis of Ashland, Ky., rounded out the top five in a race with mostly single-file race.

Lanigan and the rest of the top five closed in on Miller midway through the race but he never made a serious bid for the lead.

“I thought I was gonna go by him on the outside one time, but then he kinda moved up and crowded me,” Lanigan said. “He did what he had to do to win.

“I would’ve liked to win, but it was a good race for us. We had a brand-new (Rocket) car, new motor (Cornett Chevy), new shock package. Anytime you come out with a brand-new package like that and run second, it’s a pretty good night.”

Notes: Miller's Victory Circle Chassis has a Pro Power engine and sponsorship from McLaughlin Freight Service and Graphic Arts Express. ... Sixth-starting Dale McDowell slowed and pulled to the infield on the sixth lap. ... John Anderson pulled out on lap 18 just before getting lapped. ... Shane Clanton slowed and pulled to the outside pits on lap 19, the same lap Scott James departed. ... Twenty of 24 starters were running at the finish with only Tyler Ivey a lap down. ... Ivey picked up a feature starting spot because Earl Pearson Jr.'s car was light after a consolation race. ... Volusia action continues with two more $7,000-to-win UMP events on Tuesday and Wednesday. Thursday marks the World of Outlaws Late Model Series opener with a $10,000-to-win event. UMP runs a $10,000 race Friday and WoO wraps up the week with a $10,000 race Saturday.

Chad Mahder spun between turns three and four on the third lap and collected Jason McBride.

Polesitter Clint Smith cruised to an easy victory with Billy Decker also pulling away from the field to finish a solid second. Decker closed on Smith late in the race but couldn't seriously challenge for the lead. More than a straightaway behind in third was Frank Heckenast Jr. with Brandon Kinzer a distant fourth.

Outside front row-starter Clint Bowyer outdueled polesitter Earl Pearson Jr. through the first half of the race and pulled away for a victory. Pearson, who ran outside early, dropped into the low groove behind Bowyer the rest of the way for the second and final transfer spot. Fourth-starting Tyler Ivey chased down Pearson late but settled for third. Tommy Kerr spun in turn two alone on the second lap to draw the race's lone caution.

Polesitter Darrell Lanigan routed the field, winning by nearly a straightaway. Rallying from sixth to second was Chub Frank, who slipped past front-row starter Eddie Carrier Jr. in the final laps. Carrier got the third and final transfer spot while Davey Johnson was fourth. Jeff Philpps pulled to the infield early after his car began smoking and then flamed up.

Outside front-row starter Darren Miller jumped out to an early lead and had enough to outrun red-hot Josh Richards, who started fourth but joined the two-car breakaway. The battle for the third transfer spot was nearly a straightaway behind the top two with polesitter Dennis Erb Jr. battling seventh-starting Shannon Babb, making his first start since his team's merger with Sheltra Motorsports. Babb worked the low groove in the final laps to squeak past Erb. Dan Schlieper was a distant fifth.

Polesitter Scott Bloomquist built a half-straightaway lead after two laps and cruised to an easy victory despite lap-seven caution. Fellow front-row starter held second most of the way, but fourth-starting John Blankenship was on the move in the second half of the race and took the second spot with two laps remaining. Smith settled for the third and final transfer spot over Brandon Kinzer, who was in contention for a transfer spot most of the way. Mark Pettyjohn spun in turn four to draw a lap-seven caution.

Coming from deeper in the field than any winner so far, Rick Eckert rallied from his fifth starting position to take the lead from Jimmy Owens on the eighth of 10 laps. Owens was second and Billy Moyer, who made a last-lap pass of Clint Smith, got the third and final transfer spot. Smith led early, but Owens went under him on an early restart to take command. Eckert followed Owens past Smith a few laps later on his way to the front. Moyer dropped Smith out of transferring on the final lap. Polesitter Jordan Bland ended up a disappointing eighth. A lap-three caution appeared for debris.

Third-starting Dale McDowell overtook race-long leader and polesitter Scott James following a lap-six restart and went on to a 10-lap victory. James had his hands full with McDowell's teammate and car owner Clint Bowyer in the final laps, but James held on for second while Ivedent Lloyd Jr. sneaked past Bowyer with a high-side move on the last lap. The top four raced tightly most of the last few laps with fifth-finishing Duke Whiseant just out of touch. A lap-six caution appeared when Mike Walker spun exiting turn two.

In a thriller that included a three-wide battle at the stripe on the second lap, Wendell Wallace fell behind a low-running Steve Francis early but rallied back into the lead on the seventh lap. He led the rest of the 10-lapper with Francis second. Shane Clanton overtook Earl Pearson Jr. on the last lap for the third and final transfer spot. Polesitter Tommy Weder Jr. faded to finish eighth.

Steve Francis of Ashland, Ky., topped 68 qualifiers Monday on the opening night for UMP DIRTcar Late Models at Volusia Speedway Park's 38th Alltel DIRTcar Nationals by UNOH. Francis posted a lap of 16.060 seconds at the D-shaped half-mile near Daytona on a night when a $7,000 winner's purse has been posted for a 30-lap feature. | Slideshow

Instead of hot laps and one-at-a-time time trials, drivers ran their practice laps and qualifying simultaneously with track and UMP officials using transponders to time laps. A dozen sessions (each qualifying group split in half) of hot laps/time trials were held with five or six cars apiece taking three laps apiece. ... The system speeded up action but some drivers were concerned that drivers in the second half of a group could sandbag their qualifying times to get a better start position with the four-car inversion. ... Among Monday's entries making their first appearances at Georgia-Florida Speedweeks: Jon Henry of Ada, Ohio; Jill George of Cedar Rapids, Iowa; John Anderson of Omaha, Neb.; Greg Hill of Eveleth, Minn.; Stacy Boles of Clinton, Tenn.; Mike Hammerle of St. Charles, Mo.; Dustin Hapka of Grand Forks, N.D.; and Ronnie Rihn of Bloomer, Wis. ... Shannon Babb of Moweaqua, Ill., merged his racing team with Florida driver Patrick Sheltra's team for 2009, but Sheltra will likely miss Babb's 2009 debut after being injured in a Feb. 7 accident at the ARCA event at nearby Daytona International Speedway. Sheltra is expected to be released from the hospital Monday night after being fitted with a back brace to help his injured back heal, said long-time Sheltra crew member Mark Saul. "He's really pumped up about this deal," Saul said. ... Scott James of Lawrenceburg, Ind., is still driving the Harrisburg, Ill.-based Riggs Motorsports car he drove last week at East Bay Raceway Park near Tampa. ... Peter Mantha of Gatineau, Quebec, is driving a former Chub Frank Rocket Chassis.