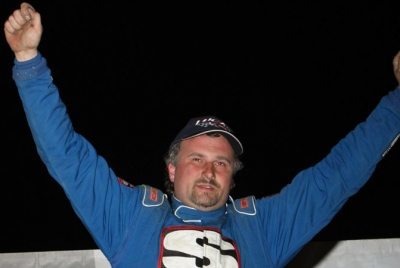 But after sizing up his superstar foes, Erb went to work, sliding under Moyer exiting turn four on the 55th lap to grab second, then sweeping around Bloomquist after a lap-60 restart with a rare high-side charge. From there, Erb pulled away, survived a restart on a caution with three laps remaining, and completed the $12,000 victory, his first at East Bay and first on the Lucas Oil tour.

"Just to come down here with the best in the business, sitting there ... I grew up watching those guys and learned from watching 'em," the low-key Erb said of the second richest career victory. "Just to have a shot to be able to race with 'em and put a show on there, and we were able to get the job done. ... It was a dream come true."

While Erb enjoyed a dream night, it was nightmarish for Terry Casey of New London, Wis., and Josh Richards of Shinnston, W.Va., Thursday's clashing drivers who faced off again. Richards was gunning for an unprecedented fourth consecutive Winternationals feature victory, but his race ended after an errant lap-21 slide job that knocked Casey out of the lead and ignited Casey's frontstretch retaliation as he rammed Richards under caution to cheers from the crowd. Casey was disqualified and faces further series penalties; Richards, who entered the race leading Winternationals points, elected to call it a night.

Erb, who started 18th, stayed clear of the Casey-Richards fiasco and kept his nose clean on a rough surface that contributed to flat tires and other problems for drivers in a attrition-filled race with a dozen caution flags. The two-time UMP DIRTcar Summernationals champion broke into the top five by the 22nd lap and kept making up ground until reaching the checkered flag.

"This has gotta be one of the best wins I've ever had," Erb said. "To come out here and just get it done here on the last night. We've had a lot of success in the UMP series and stuff, and to come down here and get a win here tonight, that's just an awesome accomplishment for us."

Moyer, of Batesville, Ark., was unhappy with rippling track conditions that tattered his No. 21, but he finished second — he was first or second in all but one feature during the six-race week — and collected $5,000 as Winternationals champion.

"We were both kind of fading together," Moyer said of Bloomquist. "(Erb) kind of got better there the last 10 laps or something. I was getting worse, extremely worse after that last restart. I was just glad to get there what we got."

Bloomquist, who struggled to keep his head steady after his car's headrest broke, ended up third while surprising Tyler Ivey of Tallahassee, Fla., a 20-year-old who was fastest among 74 qualifiers, finished fourth. Chris Wall of Holden, La., survived flat tires to round out the top five in a race that saw fewer than half the 25 starters finish.

"That was a little rough out there. I mean, it took everything we had," Erb said. "There toward the end I was looking up during a couple of those cautions and it was like, 'Man, is this thing ever going to end.' But I was able to get it done.

Erb has battled with Moyer and Bloomquist off-and-on throughout his 19-year Late Model career, but going past both of them for a victory in a prestigious Georgia-Florida Speedweeks event was special. Erb blitzed past Moyer with an inside move exiting turn four on the 55th lap and then went to work on Bloomquist, surviving a backstretch scrape with the leader when both drivers eyed the inside lane.

"I dropped down there underneath Scott there, I thought I was going to be able to get him but he dropped down there, too, basically where I was comfortable running," Erb said. "Then I decided I better change my line if I've got a shot at doing this. We let it drift off the back straightaway there and it felt pretty good, and I was able to get a pretty good rhythm up around top. ... I'm not much for going up on the topside, but we had to do what we had to do, and everything just worked out here."

Erb pocketed $15,000 for a 2004 victory at I-55 Raceway in Pevely, Mo., but a victory at East Bay moves to the top of the mild-mannered driver's list. "With the competition that was there and, like I said, to have those two guys being right there with me, I'd say this one would have to rank up on top."

Notes: Erb's Rayburn Race Car has a Rhyne Competition Engine and sponsorship from Thomason Express, McBride Mack Sales, Peterson Aluminum, Hoosier Tire and Allstar Performance. ... Erb's crew chief, Heather Lyne, joined him in victory lane and was interviewed by series announcer James Essex. ... With the exception of the Casey-Richards debacle, most of the 12 cautions were for minor issues, including single cars stopping with flat tires or other problems. ... Steve Casebolt, Josh McGuire and Chad Mahder tussled in turn one on lap 14. .... Among frontrunners with problems were Dan Schlieper (running fifth when his race ended on lap 46), Mike Marlar (fourth when his race ended on lap 43) and Brady Smith (fifth when he had a flat tire on lap 51), who returned to finish eighth. ... Moyer topped Winternationals points at 1,380 ahead of Josh Richards (1,245 points; $2,000), Rick Eckert (1,205 points; $1,000), Matt Miller (1,165 points; $800), Erb (1,065 points; $700) and Brady Smith (1,025; $500).

Polesitter Terry English took the lead when Eric Wells dropped on the third lap and led the rest of the way. Tommy Kerr finished second with Davey Johnson third. Wells, who started outside the front row, led the first three laps but slowed in turn four on the third lap. Behind Wells on the same lap, Joe Loudin's spin triggered a mess in turn four that included Tommy Kerr, Dan Stone and others. Stone restarted second on the third lap but stopped and pulled out of the race. Travis Varnadore was running fifth when he spun in turn three on the 10th lap.

Taking advantage of a tight high-side battle between polesitter John Blankenship and David Breazeale, Chad Mahder swept into the lead between turns three and four on the third lap and fought off Blankenship until his No. 23 skittered high in turn three on the eighth lap. He pulled off the track. Breazeale ran second the final four laps but couldn't overtake Mahder.

Polesitter Bart Hartman raced to victory to earn a feature transfer spot. Fourth-starting Mike Collins was second with Jayme Zidar rallying for third. The race was slowed by two cautions. Outside front-row starter John Mason got into the turn-four wall on the second lap after getting into Darren Miller, who survived the scrape but the restart revealed a broken left-front tie rod. Donnie Moran was running second on theearly restart when he slowed with problems and pulled off the track.

Fourth-starting Matt Miller squeezed under race-long leader Scott James on the seventh lap and went on to a 12-lap victory. Miller rubbed past James entering turn three and stayed just ahead as James did his best to answer. Miller, third in Winternationals points, earned the only transfer spot. Two cautions for stalled cars slowed the action.

Polesitter Billy Moyer dominated for his seventh preliminary victory at Georgia-Florida Speedweeks. Eric Jacobsen, who started outside the front row, spent his race trying to fend off fourth-starting Dennis Erb Jr. Jacobsen got second and Erb third after they battled tightly exiting turn two on the final lap while Tyler Bruening was a half-straight back in fourth. One caution slowed the race. Freddy Smith and Clint Smith got together on the backstretch on the second lap to draw a yellow.

Polesitter Brady Smith started on the pole and cruised to an easy 10-lap victory, his first heat win of Georgia-Florida Speedweeks. Third-starting Steve Shaver was second while sixth-starting Earl Pearson Jr. was third after taking the spot from front-row starter Terry English on an early restart. English fell nearly a straightaway behind Pearson and out of contention. A lap-two caution appeared for Wayne Chinn. Ray Cook, who started fourth, got into the turn-one wall on the first lap and dropped out a few laps later.

Outside front-row starter Tyler Ivey fought off Don O'Neal throughout the race to earn a front-row starting position for the feature. O'Neal, whose car showed a few puffs of smoke, finished second while Steve Francis won a back-and-forth battle with John Blankenship. Eric Wells was further back in fifth. On the first lap, Mark Pettyjohn spun to force a complete restart.

Fourth-starting Scott Bloomquist took the lead on the fourth lap when outside front-row starter Dan Schlieper got too high exiting turn four. Bloomquist led the rest of the way with Schlieper getting second. Chris Wall, who lost the third spot to Scott James but got it back because of a caution, got the final transfer position. Three cautions slowed the feature. Russ Adams slowed on the fifth lap to draw the race's first yellow. Scott Slay spun exiting turn four on the sixth lap. And Shon Flanary pulled up lame on lap eight.

Rick Eckert led all the way from outside the front row while polesitter Josh McGuire finished less than a half-straightaway back in second. The third spot was up for grabs most of the race. Sixth-starting Tim Isenberg held the spot through the early stages, fighting off Bart Hartman and Jimmy Owens while Dale McDowell chased those three. Isenberg edged away late in the race to secure the third and final transfer spot. McDowell ended up dropping. On the first lap, fourth-starting Tim Dohm got too high entering turn one and backed into the fence on the first lap. He wasn't hurt but pulled his damaged car to the pits.

Terry Casey started outside the front row and led all the way, outrunning red-hot Josh Richards, who started third and ran second virtually the entire race. But there could be bad news for Richards: a big puff of smoke appeared on the cool-down lap, possibly rear end problems. Fourth-starting Mike Marlar held off Eddie Carrier Jr. to get the third and final transfer spot while polesitter John Mason was fifth. Richards closed on Casey in the final laps but never made a serious bid for the lead. Matt Miller, in contention for the week-long points title, struggled to a sixth-place finish. If Richards were to have to go to a backup car, he'd have to start on the tail of the feature.

Tyler Ivey of Tallahassee, Fla., topped 74 Lucas Oil Late Model Dirt Series qualifiers at Saturday's finale of the 33rd annual Dart Winternationals at East Bay Raceway Park. The home-state driver tripped the clock at 14.703 seconds on the third-mile oval, which hosts a 75-lapper paying $12,000 to the winner. "We've been working hard all week and finally got the car where we need to be," said the 20-year-old Ivey, who fields a Barry Wright Race Car. Ivey spun a "2" on the PRC inversion wheel, meaning he'll start outside the front row of the fourth heat race as the top qualifying in Group B. The top qualifier in Group A, Terry Casey of New London, Wis., will start outside the front row in the first heat.

Group A
Group B