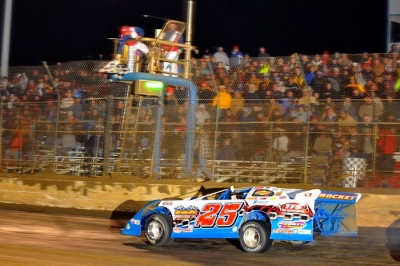 Richards, who entered Thursday night's event winless at East Bay during his five-year Late Model career, won that 40-lap feature worth $10,000, added Friday afternoon's 30-lap rainout makeup worth $5,000, then capped it Friday night another $10,000 victory at the tricky third-mile oval south of Tampa.

Each victory had its intrigue, but Friday night's race was a nail-biter at the end as Billy Moyer and Matt Miller challenged in the final laps with Richards hanging on before his smoking right rear tire blew out just past the checkered flag at the third-mile oval.

"I was just trying to hold on. Like I said, luck was on our side. Fifty laps and we made it to the finish, I guess that's all that counts," Richards said. "I've been coming down here ever since I was a little kid and the racing down here is always awesome. The track is always different and the race fans are incredible. This is by far one of the finest tracks you ever come to, and winning three races down here is crazy."

On a blackened track surface that allowed little double-file racing, Richards was in control most of the 50-lapper as he started outside the front row and built a half-straightaway margin in the early going. A series of cautions helped clear lapped traffic that hampered the frontrunners, but things got interesting when the leader's car began showing tire smoke after the final caution at lap 40.

The third-starting Moyer of Batesville, Ark., and the seventh-starting Matt Miller of Whitehouse, Ohio — both winners earlier in the week — did their best to pressure the leader, Moyer on the inside and Miller lurking one groove higher. On the final lap, Moyer took a peek inside but couldn't get a run, and Miller's high-side hopes fell short. By the time Richards came around on his cool-down lap, his right-rear tire was on the rim at a track that's notorious for chewing up rubber.

Moyer, the winningest all-time Winternationals driver, was second with Miller in third. Tim Fuller of Watertown, N.Y., who started 14th, was fourth and Clint Smith of Senoia, Ga., got his best Georgia-Florida Speedweeks finish in fifth. Fourth-starting Scott Bloomquist of Mooresburg, Tenn., was running third when he pulled up with problems on the fifth lap and headed pitside. Polesitter Dale McDowell of Rossville, Ga., ran second early but lost that spot to Moyer on the 17th lap and faded to sixth.

Richards has typically struggled on rubbered-up track surfaces, but he overcame one of his few weaknesses.

"This condition here is by far my worst condition and I knew I had Moyer, McDowell and Bloomquist right there. I was just doing my best to hold on and luck was definitely on our side this week," he said. "It's pretty crazy. I wanted to win a Lucas race and win at Speedweeks, but this is just even crazier. Maybe we can keep it going and do some bigger and better things."

The race was slowed by five cautions, the most serious for a turn-four scramble on the eighth lap that included Chad Mahder, Bart Hartman, Jeep Van Wormer, Mike Collins and others.

Bloomquist's departure caused a lap-five caution and Josh McGuire, who ran as high as fourth early in the race, spun in turn four on lap 21 to bring out a yellow. Scott James stopped to draw a lap-38 caution and Earl Pearson Jr.'s flat brought another caution out two laps later.

Turning in the best performance by a Californian at Georgia-Florida Speedweeks, polesitter Chris Shannon roared out to a half-straightaway lead after three laps and cruised the rest of the way. Home-state driver Tyler Ivey chased him in second while Scott James, who started fourth, got the third and final transfer spot. Steve Francis, who started eighth, was pressured James for the third spot on the seventh lap when he broke in turn three with apparent suspension damage to bring out a yellow. Victor Lee ended up fourth. On the first lap, Michael Walker and John Mason got the worst of a backstretch scramble back in the pack and Mason pulled in with nosepiece damage.

Josh Richards, the winner of Friday's afternoon feature, started outside the front row and continued his hot streak at East Bay with a dominating victory. Polesitter Terry Casey appeared vulnerable to Rick Eckert in the race's late stages, but Casey held on to second and when Eckert went low in turn four on the final lap, Tim Fuller — who had dropped far back after starting third — made a high-side move to the checkered flag to get the third and final transfer spot. Eckert and Brady Smith, who've both made every Georgia-Florida Speedweeks feature, will go to a consolation race. Doug Horton, subbing in Joe Loudin's No. 5, finished 10th.

Front-row starters Mike Collins and Josh McGuire both survived a wacky first lap, and McGuire grabbed a lead he'd never give up, running away for a 10-lap win. Fourth-starting Donnie Moran finished comfortably in second while Collins, who nearly got completely sideways between turns three and four on the first lap, gathered up his car and fought off a late challenge from ninth-starting Steve Casebolt. Collins earned his first feature starting spot of the week. Several starters were banged up when the first attemped start turned into a turn-four melee with drivers scrambling to avoid the mess.

Billy Moyer cruised to an easy victory from outside the front row while a tussle ensued behind him. Polesitter Earl Pearson Jr. was able to hold on to second just ahead of a battle among Dennis Erb Jr., Tim Dohm, Jimmy Owens and Darren Miller. Dohm and Owens faded at mid-race while the low-running Erb, who started seventh, moved up to third. But Miller, who started sixth, came alive on the outside and raced his way to the third and final transfer spot over Erb. A single caution appeared on the second lap for fourth-starting Chris Wall's turn-two spin that collected David Breazeale.

Outside front-row starter Dale McDowell outran polesitter Matt Miller for a first-heat victory that earns him the pole position for the 50-lap feature event. Rallying from the 11th spot to finish third was Chad Mahder, who kept his nose clean amid a Brad Neat-Don O'Neal dustup that ended up seeing both of them on the tail (Neat for a spin, O'Neal for a penalty). Tail-starting Bart Hartman pressured Mahder before ending up fourth. Several cautions appeared. Third-starting Mike Marlar spun in turn one on the second lap for the first caution (he spun again on the seventh lap and headed pitside). Another yellow appeared on the third lap with third-running Steve Shaver up against the frontstretch wall. Adam Ferri spun in turn three on the sixth lap.

Terry Casey of New London, Wis., posted his second fast qualifying time of the week, topping 75 entrants at the nightcap of East Bay Raceway Park's Friday doubleheader. Casey's lap of 14.434 seconds was fastest among Lucas Oil Late Model Dirt Series drivers for the fifth round of the Late Model portion of the 33rd annual Winternationals. Casey spun a 1 on the PRC inversion wheel, meaning there'll be no inversion for the heat races. Casey will start on the pole of the fourth heat race as the fast qualifier in Group B. The Group A top qualifier, Matt Miller of Whitehouse, Ohio, will start on the pole of the first heat.

In the day's opening feature, Josh Richards of Shinnston, W.Va., led 29 of 30 laps in the $5,000-to-win main event rescheduled from Monday's rainout.