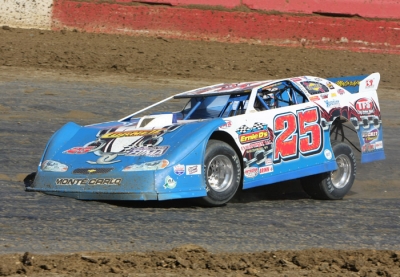 Becoming the first repeat winner of Georgia-Florida Speedweeks, the fourth-starting Richards led all but one lap at the third-mile oval for a $5,000 payday in a makeup race for Monday's rainout. The 20-year-old Shinnston, W.Va., driver made a nifty outside-to-inside move on Rick Eckert in turn two on the second lap to take the lead, then fought off Eckert's last-ditch charge for a victory during a rare afternoon race at East Bay.

"I knew on the last lap as long as I got through (turns) one and two OK, we'd be all right," Richards said in victory lane. "It's been an awesome week, hopefully we can keep it up."

Eckert, of York, Pa., fell a half-straightaway behind early but crept back into contention after the final lap-21 caution. He nearly pulled alongside Richards with a lap to go in the 30-lapper, but slipped up in turn two on the final lap and settled for second, his best finish in his new Bloomquist Race Car.

Seventh-starting Dennis Erb Jr. of Carpentersville, Ill., slipped by Billy Moyer of Batesville, Ark., after the final restart to grab third and end Moyer's seven-race streak at East Bay of finishing first or second. Steve Francis of Ashland, Ky., rallied from 19th to get his second fifth-place finish of the week.

Richards nearly built a half-track margin in winning Thursday's feature, but after building a comfortable lead Friday afternoon, he had his hands full with Eckert in the race's waning stages.

Notes: Richards drove a Rocket Chassis with a Cornett engine and sponsorship from Ernie D's Enterprises and Tim Fraker Signs. ... The race was slowed by two cautions, both for Tommy Weder Jr., who spun inside turn two on the 14th lap and then stopped on the backstretch in lap 21. ... Time constraints prevented running of the Strawberry Dash, but Donnie Moran's name was drawn from among non-qualifiers to start on the tail of the main event. ... New track record-holder Dan Schlieper was an early dropout in the main event. ... Tommy Kerr started third and ran among the frontunners before being shuffled back on the lap-14 restart.

Outside front-row starter Tim Fuller outdueled Scott James in the early laps and pulled away for a victory. James was second while Eric Wells nipped Eric Jacobsen on the final lap for third after turning up the heat on a lap-10 restart. The fourth spot was up for grabs most of the race. Kentuckians Wells, Victor Lee and Dillan White ran in a tight pack midway through the race, but Wells ended up breaking away and heading toward the front. White ended up spinning in turn two on the 10th lap. Brandon Thirlby spun in turn four on the fifth lap.

Polesitter Chris Wall led all the while 10th-starting Steve Francis rallied all the way to second. The battle for third and fourth was a wild one. Scott Slay rallied from deep in the field to get up to third, but he spun in turn four after contact with Jeep Van Wormer heading for the white flag and had to restart on the tail. Van Wormer fought off 12th-starting Ray Cook in the final laps as the picked up the final two transfer spots. Terry English was fifth. Several cautions slowed the action. Davey Johnson started third but slowed to a stop on the second lap, then pulled off. A lap-five caution appeared when Chad Mahder spun exiting turn four after contact from Wayne Chinn; officials put Chinn on the tail and he pulled off a few laps later. Mike Collins spun in turn four on the sixth lap, just before Danny Mitchell got into the turn-four wall. Steve Shaver shreaded a tire on the eighth lap (and pulled off the track along with Chris Shannon, who had right-front damage).

Thursday night's winner Josh Richards picked up where he left off the previous night, dominating the 10-lapper from outside the front row. The action happened behind him with polesitter A.J. Kirkpatrick, running second the first half of the race, spun exiting turn four with Matt Miller right on his tail. Kirkpatrick stacked up Jason McBride and Dillan White in the mess. Miller resumed in second and held that spot the rest of the way while Tommy Weder Jr. (his first transfer) and Dale McDowell got the other feature transfer spots. Tim Full was right behind McDowell in fifth. The race's first caution appeared on lap four when Tyler Bruening spun exiting turn four (Clint Smith took advantage to pull his smoking No. 44 off the track).

Front-row starter Rick Eckert fought off repeated inside challenges from Dennis Erb Jr. for a 10-lap victory. Overall fast qualifier Dan Schlieper was further back and lost the third spot on the last lap when he got too high in turn four. Jeremy Faircloth, who was making his first appearance of the week, slipped by Schlieper to grab third. Two cautions slowed the action. Fourth-starting Ricky Arms slid high into the turn-one wall on the third lap to draw a caution. His car was removed on a rollback. Shortly after the restart, Jordan Bland got into the frontstretch wall for another caution; he pulled off the track and most of the field avoided contact.

Polesitter Tommy Kerr outran fellow front-row starter Brady Smith throughout the 10-lapper for the victory. Donnie Moran had the third spot wrapped up but slowed on the final lap and stopped in turn four with apparent mechanical problems. Ninth-starting Don O'Neal moved up to take third while Tim Isenberg got the fourth and final transfer spot to earn his first start in an East Bay feature.

Starting outside the front row, Billy Moyer cruised to a 10-lap victory, outdistancing polesitter Dan Stone by more than a full straightaway. Davey Johnson held the third spot most of the way but lost control exiting turn two on the final lap, allowing Tim Dohm and Brad Neat to sneak past to be among the four feature transfers. Eddie Carrier Jr. was running fifth when he spun in turn four on the last lap of the caution-free prelim.

Lowering the Late Model track record at East Raceway Park, Dan Schlieper of Sullivan, Wis., topped 58 qualifiers in the opening race of a Lucas Oil Late Model Dirt Series doubleheader at the 33rd annual Winternationals. Schlieper blazed to a 14.136-second lap on a sunny day at the third-mile oval before the $5,000-to-win event that's a makeup from Monday's rainout. "The car's been awesome all week," said Schlieper, the only driver piloting a Wild Chassis at East Bay. "I'm just glad it warmed up. We were freezing every night."

This afternoon's program will be the first of two complete shows at East Bay. The regularly scheduled $10,000-to-win event will begin with 5 p.m. hot laps. ... Schlieper ran from 20th-to-seventh in Thursday's feature. ... Schlieper's lap broke Jason Montgomery's record of 14.151 seconds set Feb. 8, 2003. ... Among newcomers for Friday's action are Chuck Hummer of Ottawa Lake, Mich., and Jeremy Faircloth of Swainsboro, Ga. ... Chris Wall's No. 71 needed a push to the infield following his time trial lap. ... Russ King got into the frontstretch wall as he completed his qualifying lap. ... New Clint Bowyer Racing driver Dale McDowell is fielding a Warrior Race Car on Friday afternoon after piloting a Rocket Chassis the previous two nights. ... Friday's action will be called with an audio webcast by Dustin Jarrett on DirtNation.net starting at 1 p.m. for the afternoon show and 7 p.m. for the evening show. ... Because the afternoon event is non-points, no provisional starting spots are available.