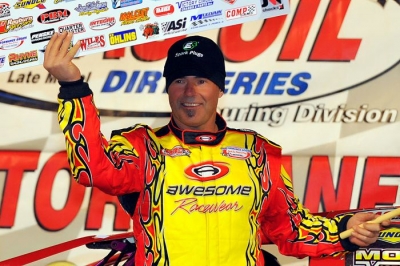 The 51-year-old Batesville, Ark., driver is at it again at the third-mile oval, grabbing $5,000 for Wednesday's Lucas Oil Late Model Dirt Series victory at the 33rd annual Dart Winternationals by fighting off two challengers on a three-lap dash to the finish. | Complete East Bay coverage

The all-time winningest Winternationals driver overtook Donnie Moran on the 15th of 30 laps and survived two restarts in the final eight laps his fourth victory in his last six Winternationals starts. Moyer won three East Bay events last year and was the runner-up in Tuesday's 2009 opener.

Jimmy Owens, the Newport, Tenn., driver who started 13th, pulled alongside Moyer in the inside groove just after a lap-27 restart, but Moyer kept his cool and repelled the challenged to edge back ahead by the final lap. Fast qualifier Terry Casey of New London, Wis., was right with the frontrunners on the last restart and ended up third.

"Jimmy made me earn it," said Moyer, who started third, took second on the ninth lap and turned up the heat on race-long leading Moran before the race's midpoint. "Jimmy got underneath me there, and I thought, 'Oh, I don't want to give it up here on the last lap.' "

Seventh-starting Rick Eckert was fourth and Moran rounded out the top five on a cold night when temperatures dropped near 40.

Fifth-starting Josh Richards of Shinnston, W.Va., was running second when he pitted after flattening a right-rear restart on a lap-eight restart; he changed the flat and ended up ninth. Polesitter Steve Shaver of Vienna, W.Va., was never in contention, fading badly to finish 13th.

Moyer, who has finished no worse than second in his last six East Bay starts, built a comfortable lead on Moran before a lap-22 caution and was careful to make sure his tires would hold up through the late stages of the second Lucas Oil event of the season.

"You just give it all and try to be there at the end. I didn't know how much room I had, but I knew the car felt pretty good," Moyer said. "I just tried to run those last couple of laps and pick it up just a little bit. Everybody's in a tire game, here. I don't know what he was on, but I was just trying to get to the end."

The feature was slowed five times, most seriously on lap 27 when Steve Casebolt got into the frontstretch wall and caused a jumble behind him that collected Jesse Stovall among others, heavily damaging the front of Stovall's No. 00. The red flag appeared but no one was injured.

The other four cautions were for minor stoppages. Dan Schlieper slowed on the second lap and pulled to the pits and David Breazeale was running seventh when he slowed on the frontstretch with problems on the eighth lap.

Richards's flat brought out caution No. 3 and Dan Stone stopped in turn four for the fourth and final yellow.

Coming from the tail of a 10-car dash, Darren Miller slid under Brad Neat entering turn three on the seventh lap to earn the final transfer spot for the main event. The fifth-starting Neat, who inherited the lead when polesitter Scott Slay pulled to the infield on the second lap, was second with Clint Smith third in the non-qualifiers' event.

Outside front-row starter Jesse Stovall, assisted by a caution that stopped a rally by Steve Francis, led all 12 laps for the victory. Francis resumed his charge on the lap-nine restart but settled for the second and final transfer spot. Brad Neat started fifth and quickly jumped into third, but he couldn't advance further. Davey Johnson came from eighth to finish fourth. Four cautions slowed the action. Butch Strait spun in turn four by himself on the fifth lap. Ricky Arms was running fourth when he spun inside turn two. Brandon Thirlby slowed with a flat tire on the ninth lap.

Sixth-starting Terry English took the lead on an early restart when polesitter Jayme Zidar jumped the cushion in turn two. Seventh-starting Earl Pearson Jr. followed English past Zidar and got the second and final transfer spot. Zidar lost the third spot to Victor Lee late in the caution-filled event. Rusty Schlenk started outside the front row and ran among the leaders before fading and dropping out. Bart Hartman, who started outside the second row, got out of shape on the first lap and had to restart on the tail. Bob Geiger spun in turn two on the second lap. Tim Isenberg spun in turn three on the third lap. On the fifth lap, Hartman slid over John Mason's nose in turn one, virtually blocking the track when Geiger and Isenberg also stopped.

In the tightest side-by-side battle of the week, polesitter Wayne Chinn fought off Steve Casebolt for a 12-lap victory. The two ran literally door-to-door into turn three just past the race's midpoint, but Chinn edged away for the victory in the final laps. Mike Marlar almost caught the lead duo during the battle but ended up slipping back to fifth on the final lap behind Chris Wall and Ray Cook. Several cautions slowed the action, including a few called-back starts. Tommy Weder Jr. ran third in the early going but lost the spot on the fourth lap in turn four when he was the victim of bumping among the frontrunners. Travis Varnadore spun in turn one on the fifth lap.

David Breazeale, answer Dennis Erb Jr.'s slide job with one of his own, grabbed the lead in turn three on the seventh lap and made his first-ever East Bay feature lineup. Breazeale started outside the front row. Erb was a close second while Dan Stone was third, holding off Jesse Stovall. Polesitter Shanon Buckingham got the worst of turn-one contact on the third lap and fell out.

Polesitter Dan Schlieper stayed ahead of a couple of early scrambles and led all the way for a victory over Josh McGuire, who never made a serious challenge. The third spot was up for grabs but Eddie Carrier Jr. held off Steve Francis, who started ninth, for the final transfer position. Ricky Arms was fifth and Brad Neat sixth. Eric Jacobsen got the worst of a first-lap scramble and dropped out; Joe Loudin and Mark Pettyjohn got tangled up on the frontstretch on the next attempted start.

Outside front-row starter Donnie Moran fought off multiple challenges from Terry Casey for a 10-lap victory. Polesitter A.J. Kirkpatrick got the third and final transfer spot whlie Rusty Schlenk, making his East Bay debut, was fourth. Darren Miller got banged around on the first start and dropped out with a flat tire.

Third-starting Josh Richards overtook polesitter Jayme Zidar with a lap-two slide job in turn four and ran away for a 10-lap victory. Brady Smith, who started fourth, was second while Tim Dohm, who led 22 laps of Tuesday's feature, rallied from seventh to get the third and final transfer spot. Zidar ended up fourth and Jordan Bland was fifth. A caution appeared on the second lap when John Blankenship, who started outside the front row, slowed after contact with Richards in turn two.

After Dale McDowell led nine laps from outside the front row, Billy Moyer overtook McDowell exiting turn two and grabbed the victory. Matt Miller, last night's winner, got the third and final transfer spot but couldn't keep up with the lead duo. Steve Casebolt caught the lead pack in finishing fourth while polesitter Don O'Neal struggled throughout the race, dropping back to fourth on the first lap and fading further in the second half of the caution-free prelim.

Polesitter Steve Shaver got the jump on fellow front-row starter Wayne Chinn and led all 10 laps. Rick Eckert started fourth and ran second most of the way while Jimmy Owens, who caught a break when a caution saved him from dropping from second to seventh, got the third and final transfer spot. Chinn ended up fourth. Scott Slay pulled off on the second lap while running near the tail and Justin Rattliff pulled off mid-race. A lap-six caution appeared for debris on the frontstretch just after Owens lost second to Eckert and then dropped further back after a turn-one tussle with Chinn. Owens was restored to the third spot for the restart.

Setting fast time by the narrowest of margins, Terry Casey of New London, Wis., topped 72 qualifiers Wednesday for the second round of the Super Late Model portion of the 33rd annual Winternationals at East Bay Raceway Park. Casey's 14.247-second lap was best among Lucas Oil Late Model Dirt Series competitors by a thousandth of a second over Josh McGuire of Grayson, Ky.

Casey drove his new Xciter Chassis last week at Golden Isles Speedway near Brunswick, Ga., but switched back to the Rayburn Race Car he's driven in recent seasons. "C.J.'s always got a good car down here, so I ain't going to fix something that isn't broke," Casey said.

The 30-lap feature pays $5,000-to-win on an unseasonably cool night at East Bay with temperatures in the 40s during time trials.

Casey's lap was within a tenth of the 14.151-second Late Model track record at the third-mile oval. ... Dale McDowell, who ran a Warrior Race Car in his debut for Clint Bowyer Racing on Tuesday, unloaded a Rocket Chassis on Wednesday. McDowell has driven a Rocket most of the last 10 years but drove the Warrior house car the final months of the 2008 season. ... Earl Pearson Jr. got into the frontstretch wall completing his qualifying lap.